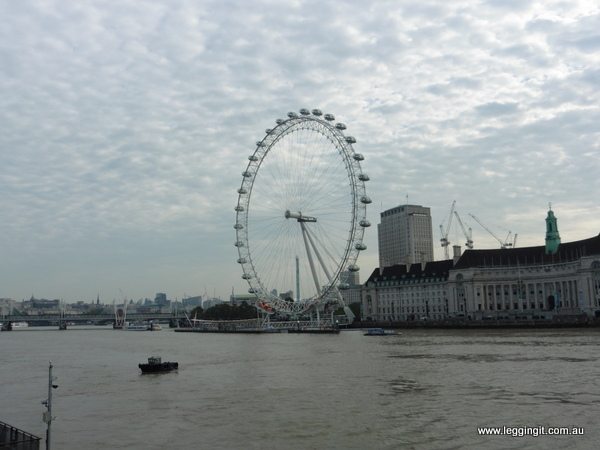 We have visited London a few times during our journey, but as our daughter Siobhan has joined us for a few days. It was time to see London as a tourist again. We were staying in a hotel in East London for a few days then heading in closer for the remaining three.

So after an early night this morning we were up early in readiness for our day in London. With Siobhan in tow we caught the bus outside the hotel to Walthamstow station and soon were on a train headed towards Green Park station. The London tube system was mega packed with commuters. It was like watching lemmings marching to their deaths as they streamed through the station on their way to work. 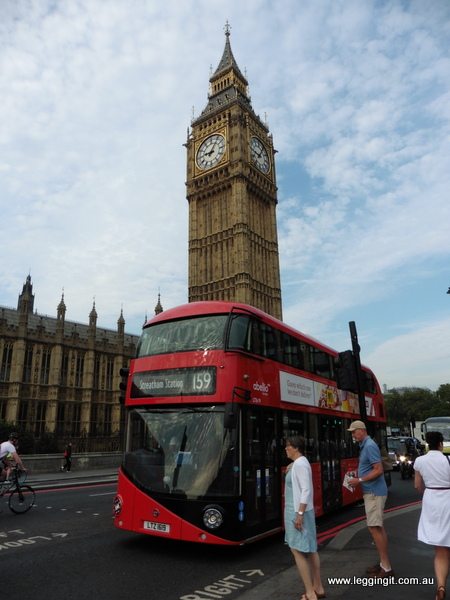 Arriving at Green Park we swapped for Westminster and soon were emerging into one of the most iconic London panoramas. In front of us lay the Houses of Parliament, Big Ben, Westminster Cathedral and a statue of Winston Churchill. Not far away was the Thames and we had views of the London Eye and beyond it The Shard. We headed down stopping briefly at the most famous address in London, Number 10 Downing Street. 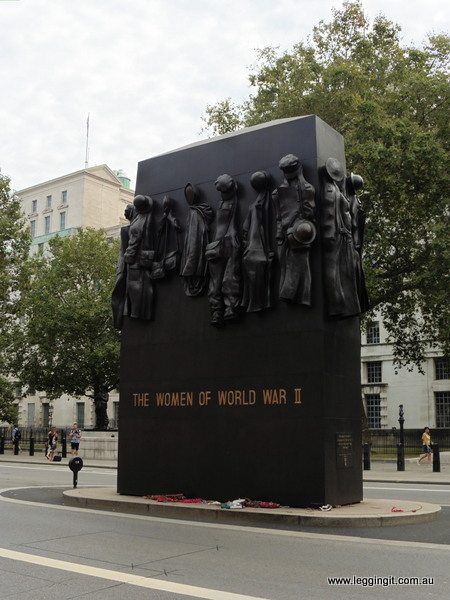 Along either side of the street massive Georgian buildings towered over us and we passed the memorial to the women who died in World War Two.

Further on we stopped off at Horse Guards Parade and museum for the changing of the guard. The Blues and Royals were on duty and we were able to snap a few photos of the cavalry officers resplendent in their blue tunics, thigh high cavalry boots, shiny breastplate and helmet. Inside their sentry boxes they sat astride the magnificent dark coloured chargers and we were able to photograph Siobhan with them. 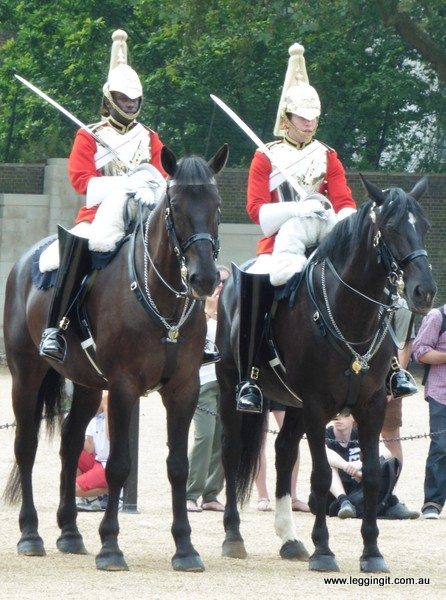 At 11 AM the Changing of The Guard ceremony started with the police clearing the Horse Guards Parade ground in readiness of the cavalry. Firstly the Blues and Royals not on guard rode through the gate and formed up on the parade ground. The relieving troop bore into sight slowly walking along the avenue. They were the Queens Lifeguards and their uniforms differed slightly. Where the Blues and Royals wore blue tunics, they wore red. Also the plumes on their shiny helmets instead of red were white. They rode into the parade ground and soon the ceremony started. The police were kept on their toes because it seems the sun was cooking people’s brains. There were people trying to get the perfect shot by crossing over the barrier and the police were having none of that. Even one of the Lifeguards ushered one overly zealous person back behind the barrier. It was a great ceremony which is one of the key parts of royalty in London. Whenever we think of the Queen we always think of golden carriages and the cavalry.
After the ceremony was complete the Lifeguards took their posts and the Blues and Royals walked their horses off the parade ground up the street towards Buckingham Palace. 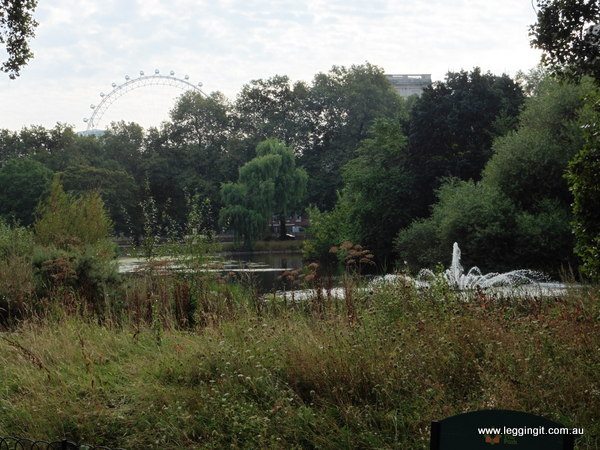 It was time for us to head there too. Separating Horse Guards Parade and Buckingham Palace is St James park, a park dating back to medieval times. Back in the thirteenth century it was the site of a Leper Colony (In those days they didn’t have such famous neighbours). These days St James is a lovely park which stays true to its design in the 1800’s by John Nash by displaying the finest aspects of what we know today as English cottage gardens.

By the time we arrived at Buckingham Palace we streets were packed with crowds lined up behind the barriers three deep and sometimes deeper. We found a spot and were able to watch as guards departed the palace with the bands playing. They looked resplendent in their red tunics, black trousers and bearskin hats. You can’t come to England and not see the guards. We also got to see a few London bobbies. After the changing of the guard we snapped a few photos of Buckingham Palace before cutting across Green Park to the station.

Along the way we passed the Canadian War Memorial which as been in the news lately. The monument is a sloping piece of granite with maple leaves carved into it and water running down its surface. The recent hot weather has seen lots of people letting their kids slip their shoes off to walk all over it. It has caused a bit of community outcry at the disrespect shown, however not enough for anyone to erect a barrier to stop people from crawling all over it. A sign nearby requests people not to climb on it but its obviously ignored.

At Green Park Station we headed for Warren Road station where we changed for Camden Town. 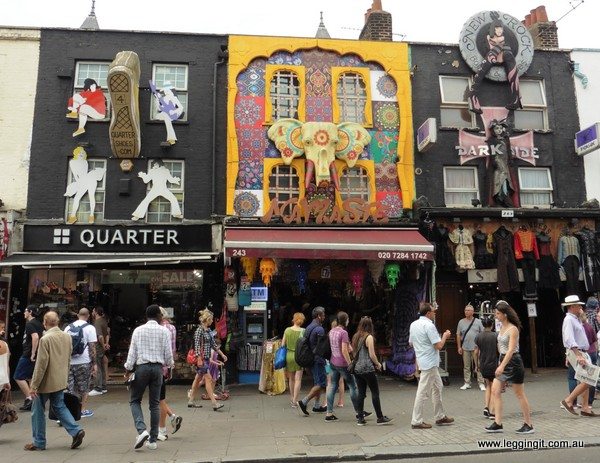 Our plan was to take part in the 2pm Walking Tour of Camden Markets so as we had one hour to kill we found a local pub for a meal. The meal was pretty average but the service was great. As it turned out we’d actually arrived at the wrong station for the walking tour. It met up at the Chalk Farm Station not the Camden Town station.

Not all was lost as we spent the rest of the afternoon exploring the various markets of Camden and all the quirky little stalls. It is one of our favourite spots around London. Although we’ve visited before and thought we knew all the stalls this time we were able to find the most quirkiest cafe of them all deep beneath the old horse markets. In a corner of what looked like an antiques shop a piano, a few lounges, chairs and tables were arranged. Whilst we slowly drank our drinks the barista tickled the ivories crooning songs of the 30’s and 40’s. It was the most surreal experience. 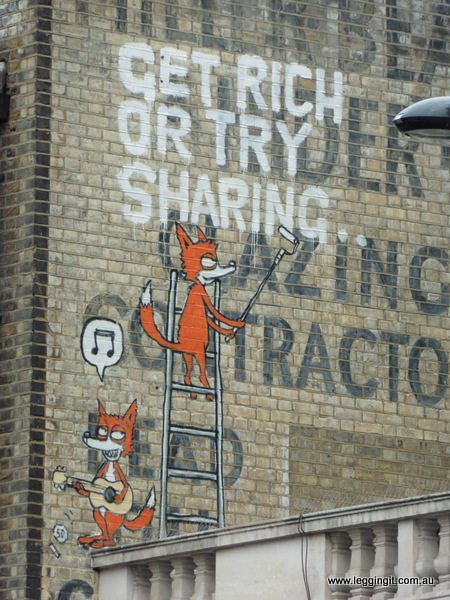 As our feet were starting to throb it was time to call it a day and head back to the hotel. The late afternoon heat seemed to bring out all the crazies with the sun boiling their brains and they seemed to all be on our bus home. After arriving back at the hotel we headed for a meal at the local Chinese restaurant and afterwards it was time to call it a night.Tomorrow we are heading to the Tower of London which should be fun.

2 thoughts on “London As A Tourist”