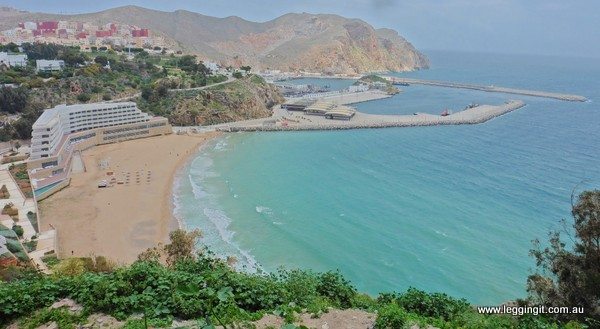 For the last week or so we have been killing time in El Hoceima…it was not our plan but sometimes other things take control of your travels…read on and you will see what we mean.

Heading out of Fez on the road to El Hoceima, it seemed like the population of Fez had lost their minds and just wanted to get under our wheels. People were stepping off kerbs, from behind buses and the occasional dog just wandering aimlessly across the road had us on our toes. Google maps took us out to the edge of the city, where we were hoping to pick up the N5 over the Rif mountains. Soon we were faced with a line of concrete barriers blocking the road, wondering whether we’d have to retrace our route and find an alternative. Luckily, one advantage of being on a motorcycle is when you’re faced with a barrier such as this, you just ride around them. Spotting a gap wide enough to squeeze the bike through we were soon on the other side, passing a local guy who gave us the thumbs up which may have meant many things. It may have meant, “the road ahead’s ok,you can get through on a bike”, “nice camel”, or “you pair of idiots you fell for it! See you on the way back out!”.

Well beyond the concrete barrier was a locals only bridge leading to the highway, however the road and the highway were no longer joined. Once again we were overjoyed by the benefits of being on a motorcycle, “a bit of offroading, yep no problem”. I held on tightly as Ron gunned the bike as we rode up over the embankment onto the highway. Soon we were happily motoring towards our destination.

Heading out of Fes once again we were amazed at how fertile the surrounding area is. Lush green pasture spread in every direction, broken by orchards and fields of small crops. Along the sides of the roads farmers sold their produce beans, oranges, carrots, onions. The countryside also had an impact on the animals. Gone were the gaunt frames of working animals struggling to survive, replaced by fat furry donkeys,fat wooly sheep, horses, cattle and goats all in good condition. As for the roads well, the further we were from Fes the roads deteriorated. Lumpy, bumpy roads caused by subsidence really were a nightmare and the higher we climbed the worse they got. Around Tieta-Ketama lots of people were waving, and yelling out to us,to which we thought what a friendly place. It was only when a car sped up beside us with the passenger hanging out the window trying to sell us a bag of drugs that we realised we were in the area famous for it’s hashish. Those happy smiling people were probably smiling because they were stoned off their heads and were inviting us to join them.

As the road wound down towards El Hoceima memories of home flooded in with hundreds of grey gums along the roadside and hundreds more Golden Wattle in full bloom, what a beautiful sight.

After a bit of a ride around El Hoceima we eventually found our hotel and had the bike parked up.

El Hoceima is one of those places which seems to have never reached its true potential. Set high on cliffs overlooking beaches on the Mediterranean Sea you’d be excused to think wow how perfect. Unfortunately it’s on the wrong side of the Mediterranean. If it was in Europe cash would’ve literally been poured into it to make it a tourist destination. It seems however, that despite a massive Mercure Resort on the beach below the town it is definitely not on any tourist map. From whispers around town we’ve learnt that we may have missed the tourist boom by almost 40 years when the town boasted a Club Med and a thriving restaurant trade. Club Med offered opportunities for high end chefs looking for employment outside of the cities of Fez, Marrakech and Casa Blanca which lasted longer than the usual two month tourist season. Sadly since Club Med left town the chefs also left so these days there’s just standard Moroccan food in tiny cafe’s and thoughts of what could’ve been.

Just looking around the town it’s easy to spot local projects that just haven’t had the money or the will to finish the jobs properly. Things such as the collapsed retaining wall at the tourist lookout overlooking the harbour, or the paving along the road to the port where water has washed out a large area of them but in the haste to repair there’s been no replacement fill and no thought to pattern as the pavers were put back all higgledy piggledy, stairs leading to the beach, quite beautiful as they are but without landscaping and drainage around them so who knows how long they’ll last. 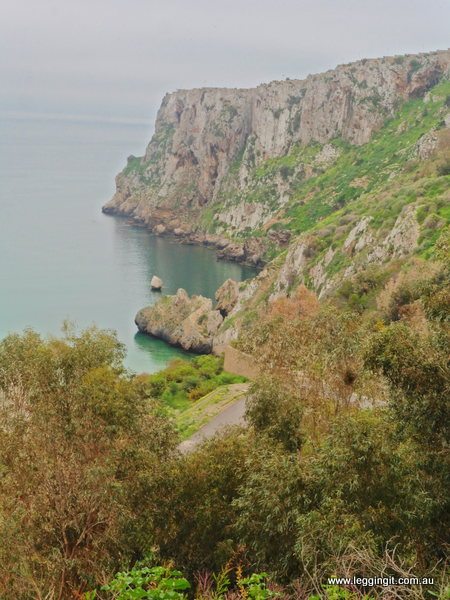 It’s also the sight of local ladies dragging trolleys filled with empty water bottles to a water outlet on the side of the road reminds us, despite all the three storey buildings we’re still in a third world country.It’s hard to imagine summer here when it’s said that the town population quadruples in size to over 400,000 when supposedly all the local Moroccans living and working in other European countries return home.

I couldn’t imagine European tourists adding El Hoceima on their bucket list as there is nothing to do in town.
Supposedly there’s snorkeling, paddle boats and canoeing in the sheltered waters, but seeing how Moroccans just drop their rubbish in the water,along with the amount of rubbish washed up on the beaches, snorkeling and swimming sounds pretty repulsive.

Despite all this there is a nice feel about the town and we really enjoyed the hospitality of the Villa Florido and the little takeaway restaurant across the street. They cooked simple delicious meals including freshly caught sardines and other Moroccan meals.

We spent a few days on the bike checking out Nador and the worlds shortest border at Peñón de Vélez de la Gomera, near Bades which is reached through the national park. However, with the onset of bad weather there was nothing to do in El Hoceima, no cinemas, no museums, so as our cabin fever increased our opinion of the town went down. Good weather and packing the bike up to leave never felt so good.

Unless there’s a change in attitudes and some fresh ideas about local tourism we wouldn’t suggest El Hoceima for any longer than an overnight stay on the way to somewhere else.