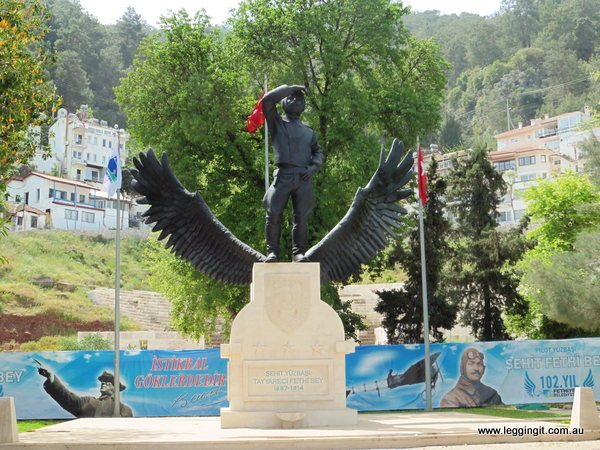 Today we took a trip into Fethiye to check out nearby Kayaköy. Our first stop was the tourist bureau in Paspatur, to check out the huge winged bronze statue. It’s dedicated to Fethi Bey, the first Turkish pilot who lost his life during WW1 when his plane crashed near Damascus. As a tribute the town of Megri was renamed Fethiye in his honour. 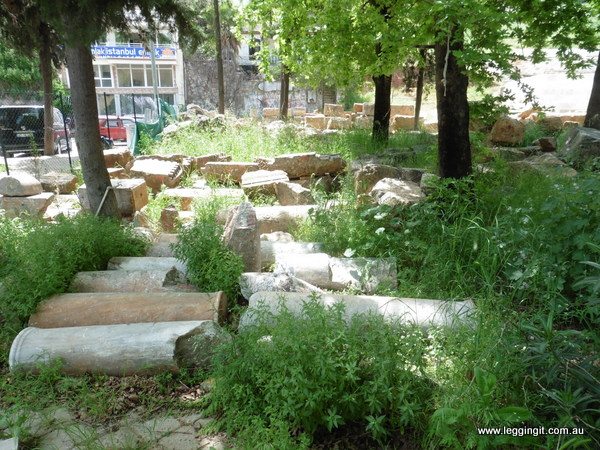 Near his statue is the ancient Theatre of Telmessos which is currently being restored. Our mate Brian in Uzumlu is outraged at the apparent “desecration” of archaeological sites. This latest Turkish trend of rebuilding archaeological sites such as here and Patara really is thought-provoking. It depends on your point of view. It’s interesting however seeing the new/old theatre taking shape. 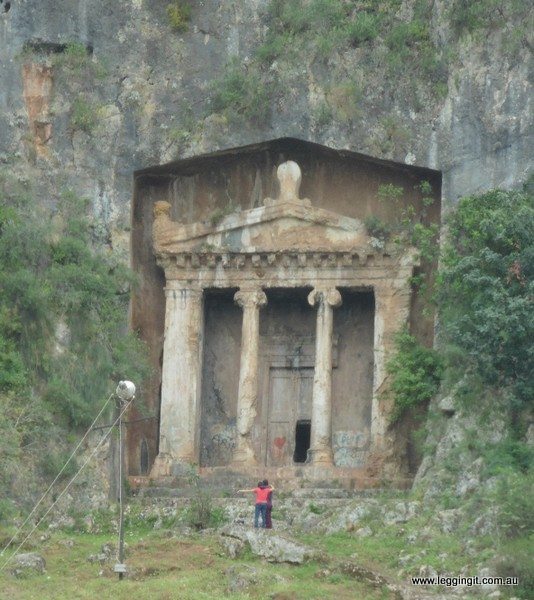 We took the road up the hill overlooking the theatre and spotted a sign to Kayaköy. It was on the road near the huge Lycian Tombs not far from the city centre. Following the signs we headed up over the hills to Kayaköy. The road which winds up through the hill is atrocious with more bumps and humps than Quasimodo’s back. The asphalt is of varying quality with patches where it seems that gravel is optional. Kayaköy is only about 8 km’s from Fethiye so quite close.

Kayaköy or Livissi traces its roots back to Lycian times with many Lycian tombs still visible. Originally it was a Lycian city, which became a town as it became less important. Eventually by the 20th century it had become a village of about 2,000 inhabitants. Many Anatolian Greeks lived in Kayaköy up until 1922 by which time it had become completely abandoned. This was due to persecutions of Ottoman Greeks and other Christians across the empire during a period which culminated in the Greco-Turkish War (1919-1922). Around the area of Livissi and nearby Makri murders and persecutions had become so widespread in 1916, that a letter was sent to the British consul general at Rhodes asking for intervention. Unfortunately the letter was intercepted by Turkish authorities causing a swift reprisal and many families were deported on foot to Denizli, about 220 km’s away. They faced various atrocities, torture, and death. Two more exile phases followed in 1917 and 1918 with more death marches leaving the bodies of dead children and elderly, who’d succumbed to hunger, on the road to Denizli. In 1922 the last of Livissi’s inhabitants abandoned their homes and boarded ships to Greece. 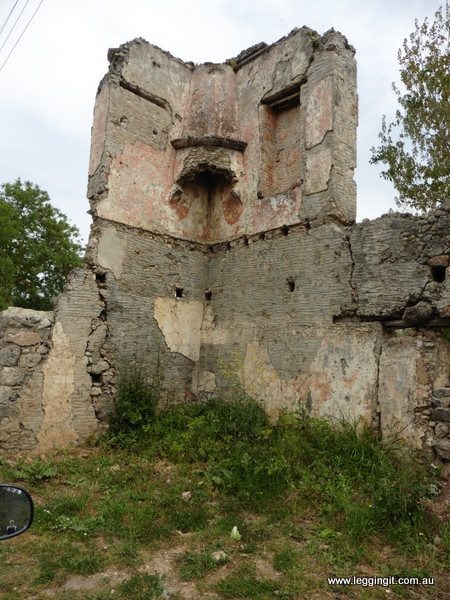 Since then it has become a ghost town with the Turkish population preferring to stay on the flat land close to their farms. These days it’s a popular tourist attraction for tourists from Fethiye and Ölüdenuz with the usual vendors selling trinkets. Some of the houses have been restored and are now occupied. Throughout Kayaköy there’s supposedly over 20 churches and hundreds of abandoned houses. It’s quite amazing descending the hill from Fethiye to look across to Kayaköy and see all the abandoned houses across the hillside.
Around the valley below Kayaköy are a few nice looking restaurants and venues which are quite popular wedding venues. Our mate Eddie also highly recommended them as a great place to eat. 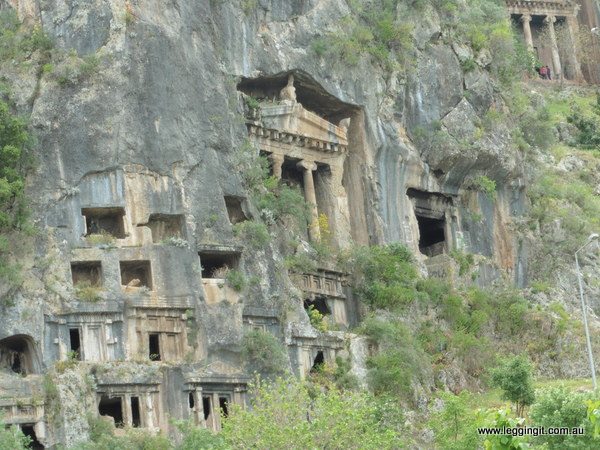 As we had switched over to our reserve tank we decided to head back to Fethiye and top up. It also gave us a chance to take some photos of the sarcophagus which is in the middle of the street not far from Paspatur, and some of the nearby Lycian Rock Tombs. The Tomb of Amyntas is the most impressive. It was built in 350BC and is gigantic. It is the same size as a temple inside.

We saw the sign to Ölüdeniz so took a run over the mountain and down to the beach. On the way over we passed a wedding procession. Leading the procession was a small truck filled with musicians banging drums and playing zuma (a type of oboe) and Ney (an end blown flute). It was a racket loud enough to wake the dead. Behind them followed a long line of cars with a simple scarf tied to the mirror signifying that they were with the wedding party, all tooting their horns. 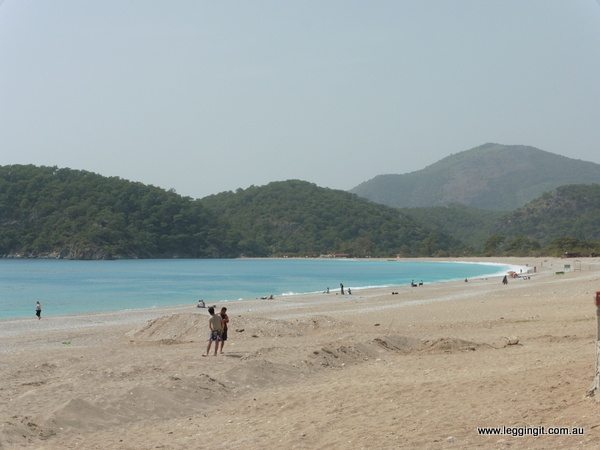 When we arrived in Ölüdeniz we’d hardly parked the bike before the vultures swooped offering boat tours. One boat was loading passengers on the beach and it looked pretty crowded. We simply smiled and took a card with no intention of going on a tour. We’d met a local Turkish bloke in the Grapes called Akeef, a mate of Mamet’s who’s boat was up on the slip in Fethiye, but due back in the water. As we’d seen him heaps of times we’d got to know him and discovered that his trips were pretty chilled. The current plan is to go out on his boat when Sandy gets back.
Ölüdeniz is just a tourist beach with all the tourist shops and bars. The beach is quite pretty but a bit too busy for us.
We found a local beach bar to have a drink but found it just a bit too touristic, so quickly downed them and headed for Uzumlu.

On the way back over the hill we passed the same wedding procession heading the opposite way.

As the day was really warm by now a dip in the pool and a cold drink was in order. Tomorrow is a rest day so we’ll be taking it easy in Uzumlu.