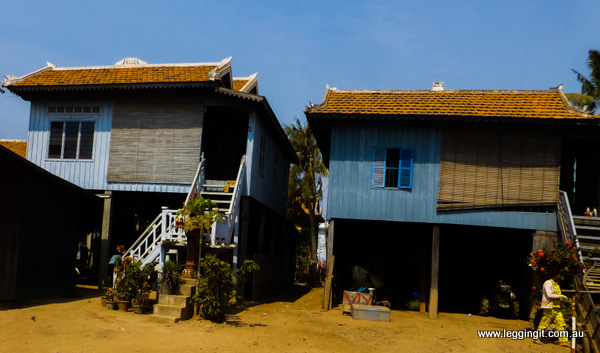 Today we were hoping to retrieve our passports and move on to explore more of Cambodia but it turned out we would be stuck here for a few more days.

Breakfast of croissants vegemite and pastries at Tour Le Jours again. As its not far from the hotel its a great way to start the day with freshly baked pastries and friendly staff greeting us.

We cruised into the city to check out the progress of our visas to find that our fixer had changed the days. He had quoted Tuesday but now they wouldn’t be ready until Friday afternoon. He quoted how it took six working days, but we left feeling cheated and a bit powerless as he smilingly delivered the news.

We recouped back at the hotel, with a swim and contemplated what the hell we were going to do in Phnom Penh for the rest of the week. We wrote a bit of a list with days and filled in some of the blanks going through guide books and checking the Internet to check what days things were on etc, until we had a plan.

We discussed moving hotels, but decided not to. Although the Marady is a bit away from the main part of the city, the roadworks out front causing traffic to be a nightmare coming home it’s got a pool, the staff are friendly, the prices are reasonable and we enjoy staying there, so why move. Hotel sorted, now transport….

Would love to take the bike back to rent one through the hotel which would be cheaper and easier when checking out. However after thrashing it out, we decided to stick with the same bike shop because while we’ve got their bike we’ve got a bargaining position regarding our passports.

We travelled back into town and across the Japanese friendship bridge which crosses the Tonlé Sap River, to further explore north of the bridge. Extensive roadworks were going on just like every other road in Phnom Penh it seems. We headed up the road trying vainly to avoid potholes until the road petered out to a single strip of tarmac with a rough dirt track either side. A small dusty track led to the riverbank and we thought lets check it out and maybe find the ferry to Silk Island. As we rode up to the riverbank a man riding past pointed over his shoulder, and I thought “he must be pointing to the ferry, that way” so we turned left.
After a while of travelling along the road I thought to myself “I’m never getting directions off him again, he’s got no idea” lol
We travelled along hitting potholes every time I glanced off the road to check something out, but apart from getting a sore butt it was a nice ride through the countryside and rural villages. After a while our butts couldn’t stay on the bike any longer and unable to find anywhere for an early lunch we just stopped at a roadside shop selling homemade drinks. We sat down with some embarrassed high school kids, the girls all smiling and trying to pluck up the courage to speak and the boys all on their iPhones oblivious to the rest of the world, like boys all over the planet. The lady running the stall as proud as punch said “Giddaye” with the prompting of the girls sitting at the table and served us a refreshing icy sugar cane juice with a hint of fresh lemon.
We decided to head back the way we came, stopping briefly to refuel and haggle over fuel prices at a roadside stall selling glass coke bottles full of fuel.

We continued past the track where we came in and with Michele praying to the almighty crossed a thin strip of land, just over a tyre width, which was precariously sitting between a coconut palm and the side of the track which had fallen away in a landslide. We soon rejoined the road heading south and headed through more rural areas and Wats, before passing through an area of deserted restaurants situated over the water but quite a way off the road so you could just see them, will have to check them out properly at a later stage. The road ended after passing through markets and we found our way back onto the man in road and over the Friendship bridge. It may be called a Friendship bridge but there’s not too many friendly people in the bike lane, with everyone trying to get past in the thin potholed lane.

We had a late lunch at Karma restaurant before returning to the hotel for a bit more planning, a swim and relax.

As the sun was setting we ventured back to the Karma restaurant and ordered a Khmer Amok. It’s “the” Khmer National dish, and it was awesome. It came out served in a banana leaf all folded up just like a “Wok in a Box”. Michele ordered Fish Amok and I chicken. They were well structured curries with subtle flavours and finally after all the Khmer foods we’ve eaten a little spicy, for me the best Khmer dish so far.

My radar was running at full alert on the ride back to the hotel after seeing an old couple knocked down on their bike trying to cut across traffic at our first turning. It seems everyone here trusts everyone else to not knock them over so don’t bother checking their mirrors, or turning their heads, they cut across lights against signals maybe trusting in the Buddha to keep them safe. Well unfortunately for this couple, the Buddha must’ve been busy saving someone else’s butt at another intersection so they lucked out.

As we were approaching the traffic snarl at the intersection outside our hotel we cut across the gutter along with all the other bikes to get ahead of the cars,trucks and Tuk Tuk’s blocking the road. A lady trying to get into the crush of bikes, stalled, didn’t get her foot down in time and dropped her bike …..oops We stopped to help her up and she was ok. The bike crush got closer and closer as we slowly walked our bikes closer to the intersection so my knees stuck out further and further to keep any bikes from hitting us. People just kept coming pushing into stupidly small gaps trying to get ahead, we were cut off a few times by people and my blood was starting to boil. This is insanity. Then a girl, who’d cut us off, dropped her bike almost causing a domino effect in a dramatic spray of broken mirrors and fairings. The traffic parted and we slipped through and were soon on the loop back to the hotel, grateful to be home.