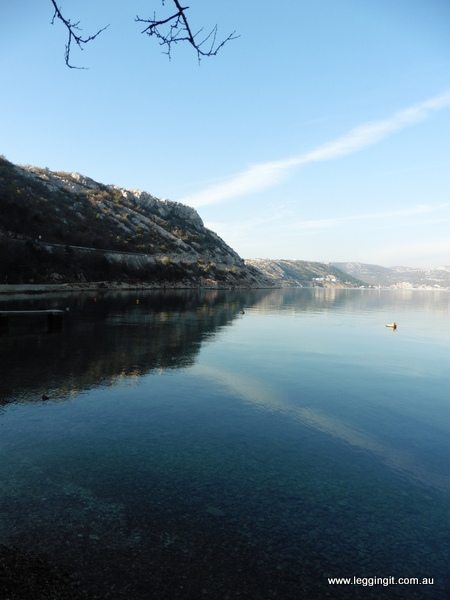 Our second night in Kraljevica was much more comfortable after discovering two bed sheets. It’s amazing the difference that two thin sheets of cotton (and a roaring fire) make. We looked at relocating to the lounge room to the fold out bed next to the fireplace but there was not enough room. Despite the cold the apartment is fabulous, with heaps of room and great views across the bay. After breakfast we decided to take a walk around the shoreline. Along our area there’s lots of little homemade jetties with boats tied to them. The water has to be seen to be believed, it is so crystal clear. Every time I look at it I just want to dive in. 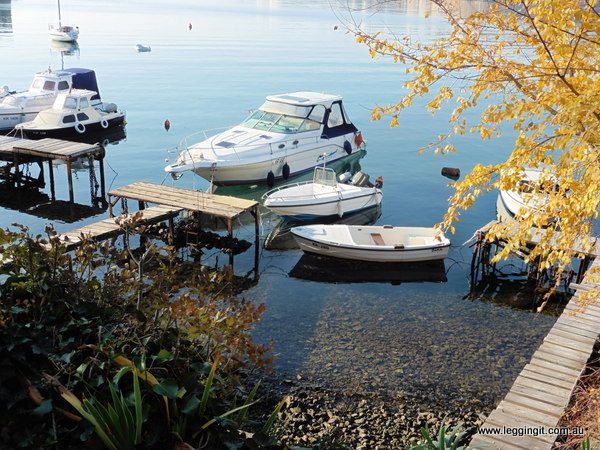 The beach is a little strange with concrete lining the shoreline and ladders leading into the water, just like a swimming pool. The bottom is all rocky but the locals have cleared areas about three feet wide extending about ten feet into the water of all rocks. 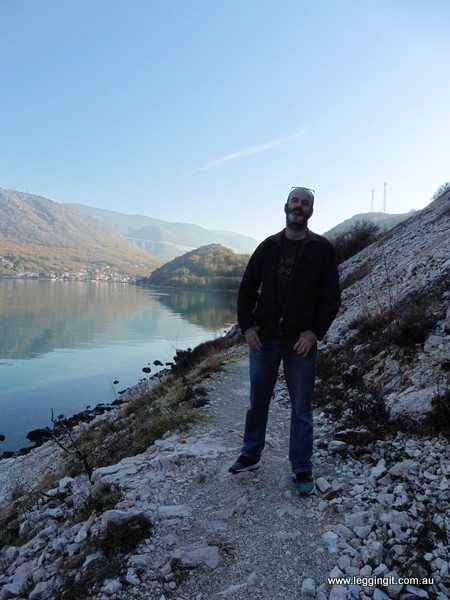 Our walk took us around the point along a rocky trail which the locals seem to use quite frequently. 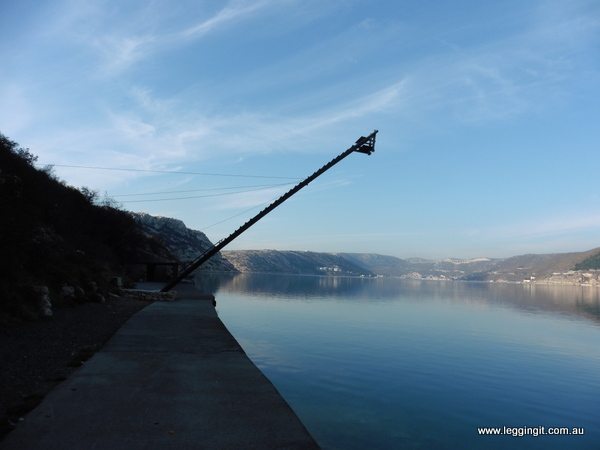 Eventually we arrived at the village of Bakarac which had a little marina and some old wooden diving towers. It was a nice spot to stop and have a coffee. In summer it’d be absolutely perfect with deep crystal clear water. It looks like long ago the area was popular with holiday makers, or even weekenders. Around the bay lots of concrete was laid with ladders and steps to allow people to climb out of the water after swim in the crystal clear water. It’s all a little run down now. The concrete’s cracked, the wooden diving towers are missing a few boards. Maybe today’s population prefer exotic or cheap overseas destinations in preference to the crystal clear waters of this bay is the reason for the neglect. 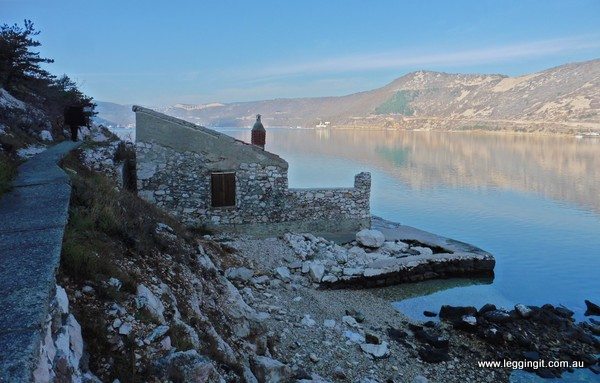 Returning back along the same trail Michele suggested we have lunch in the garden overlooking the bay. The weather was just perfect and we enjoyed Pasta and salad in the sun. 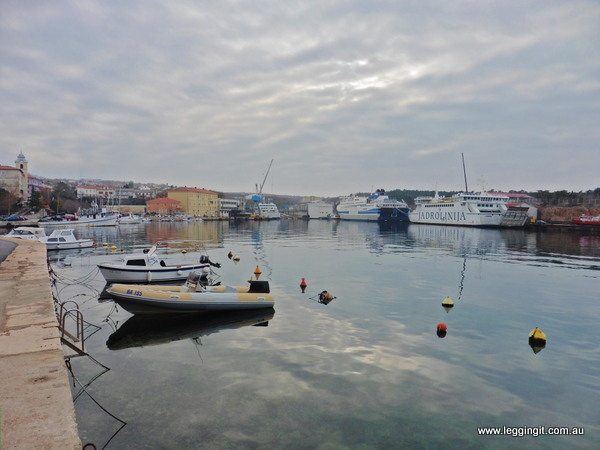 As we hadn’t explored much of Kraljevica we decided to walk a bit of lunch off with a stroll down town. Kraljevica is an interesting town, with lots of 50’s style buildings which were built for the dockyard workers. They all look the pretty much the same, maybe the only difference is the level of decrepitness of some. It’s a pretty hard bitten community where it seems nobody rises above their station, the locals say hello, they even stop to talk to the town drunk, the price of drinks in the local bars is still cheap, and the little supermarkets still wrap items in paper and write the price on by hand. 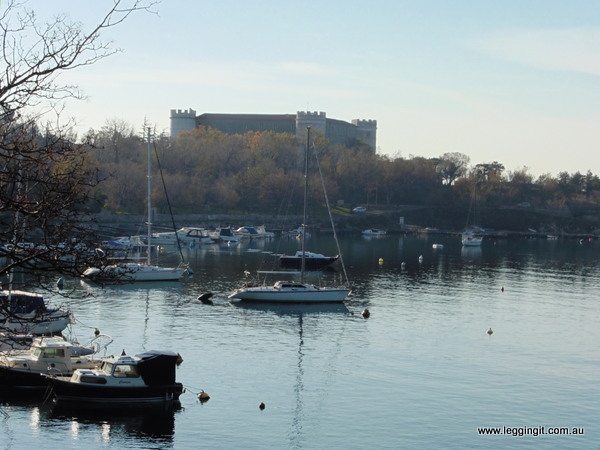 It’s pretty hard to imagine Kraljevica becoming a tourist destination. Maybe that’s what the attraction is.
In the middle of Kraljevica above the harbour is the old castle built by the Francopans, the former Croatian lords of Krk, Dalmatia and a large area of Croatia. They built about 20 castles along the coast. The Francopans were persecuted by the Hapsburgs, the Austro-Hungarian rulers for plotting with the Turks to overthrow King Leopold I and Count Fran Francopan was executed. After that it was all downhill for the family. The castle looks a little shabby these days but still is an imposing structure. 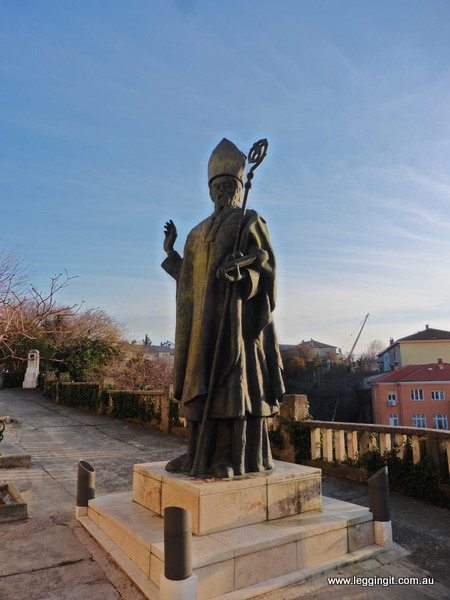 At the bottom end of the Main Street the St Nicholas church is pretty modest apart from the large bronze statue of St Nicholas, the patron saint of sailors outside. The church is simple but quite beautiful inside with statues of Mary and Jesus dressed in fine white clothing. It’s also a well used church with locals coming and going at all times of the day.
Around the Main Street and down on the wharf there’s about six odd cafe’s so before we leave we are hoping to have visited them all. 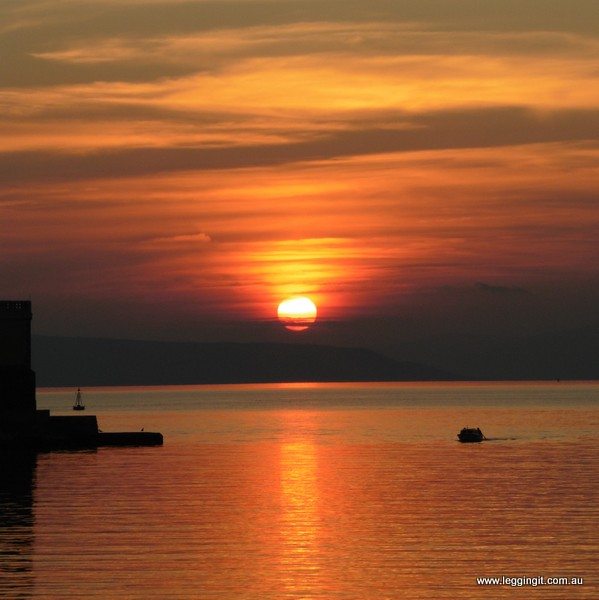 As the sun was going down we retreated back to the apartment. Tomorrow we might head into Rijecka.

One thought on “Exploring Kraljevica”