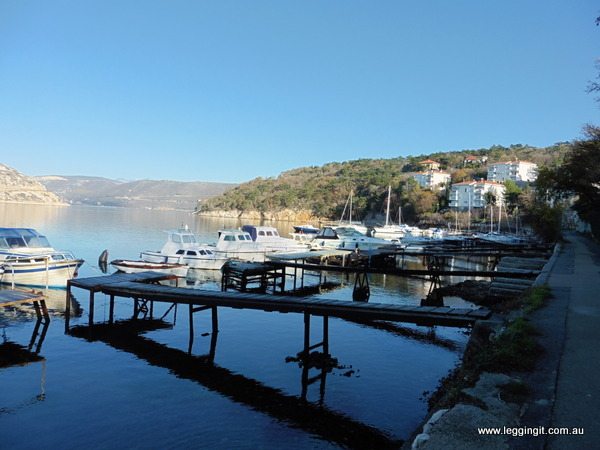 “Thank god for the heater” is what we were thinking at 10 last night. The beds had a bottom sheet and two thin blankets so we were absolutely freezing. Eventually we took the covers off the two lounges and with our winter coats covered the bed. We cranked the oil heater up and ran it at full bore all night. I even put some socks on for good measure. It’s our own fault as there’s a wood stove with heaps of wood which we didn’t bother lighting. We didn’t think it would be cold enough. Boy were we wrong. Eventually it got warm enough and we slept through.
After breakfast we headed to Krk. The island is connected by a bridge which has a toll of 21 Kuna. The toll took us by surprise so I was searching through my pockets for the correct change. The bridge recently was closed as there were 206 kph winds, (known locally as the bora). It would’ve been pretty hair raising as the guard rails on this bridge are only about waist high and it’s a few hundred metres to the water below. 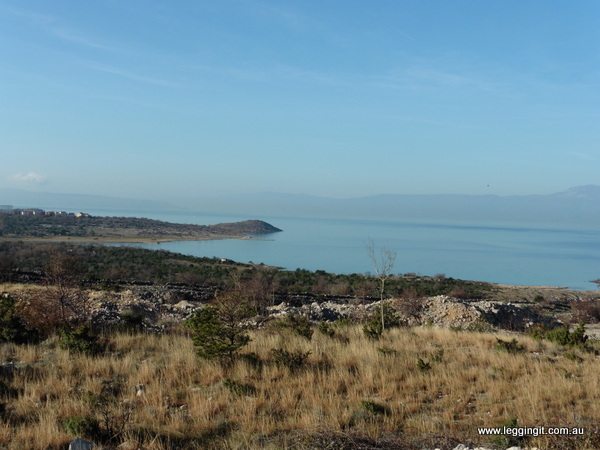 Arriving on Krk the first thing we noticed was rocks. I imagined the poor old roman legions being sent out on the island in their sandals. They would’ve been cursing and swearing as they rolled ankles and stubbed their toes on all the boondies which litter the island. There’s so many boondies that the land is almost unusable. If the locals want to grow anything first they have to clear the land of the rocks. Everywhere on the island the locals build rock walls and pile the rocks. Even tourists get in on the action and down at Oprna Bay they build walls forming letters so that from the road above it’s easily visible to read. It’s sort of graffiti with rocks. Despite all the rocks the island is the perfect place for boats, with little sheltered bays all over the island. The winds must also affect the island because the only areas of scrub grew in the protection of the hills.
We arrived at the town of Krk around lunchtime, after investigating a few bays. If only we’d bought our swimming costumes as the water is absolutely stunning and so clear. It’s so clear that it makes Evian look cloudy. 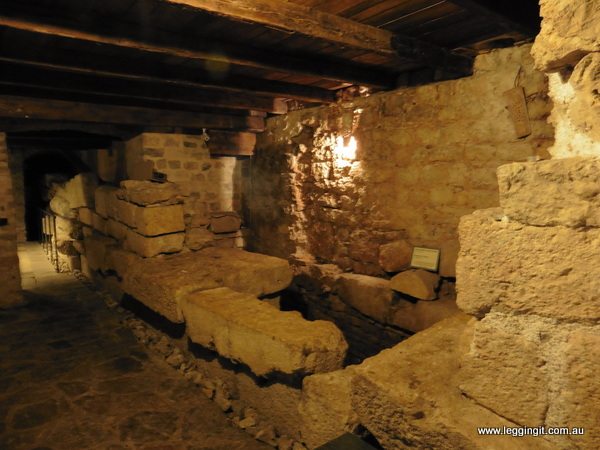 Krk was a bit of a shock as we were expecting a much larger town. Along the harbour the cafe’s and restaurants were filled with people enjoying the winter sun. A small restaurant caught our eye as it’s lunch special was octopus stew, a local favourite. The restaurant was filled with roman artefacts in display cases and on the walls. In the basement they proudly displayed two roman city walls from the 1st and 3rd century which they’d discovered when doing renovations. On the wall in the restaurant was part of a roman gravestone from which the restaurant gained the name. The restaurant menus had the story all about their discoveries, which was quite fascinating. The restaurant was a great setting for lunch with a roaring fire and roman walls. 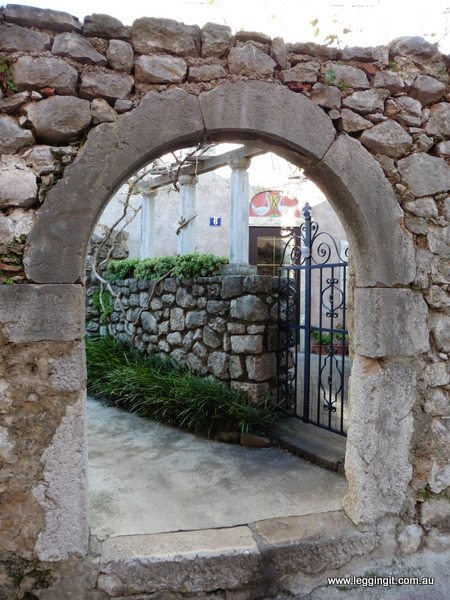 After lunch we took a look around the medieval section of Krk with its tiny streets, city walls and tower before getting back on the bike. 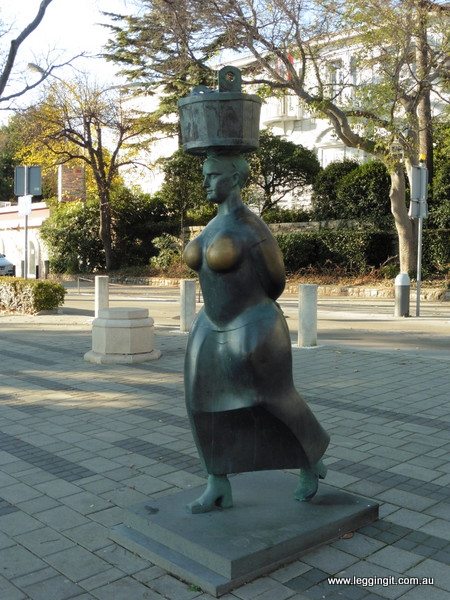 In the park on the harbour side a statue dedicated to the ladies of Krk stands proudly by the old wash baths. With a washing basket balanced on her head she takes us back to a time not so long ago when the area would’ve been buzzing with women doing their washing. With pendulous breasts, wide hips and a stoic face, she’s definitely no Barby. There’s no sugar and spice, I think the women of Krk must’ve been built from much tougher stuff to suit the conditions. Old Barby wouldn’t have survived. 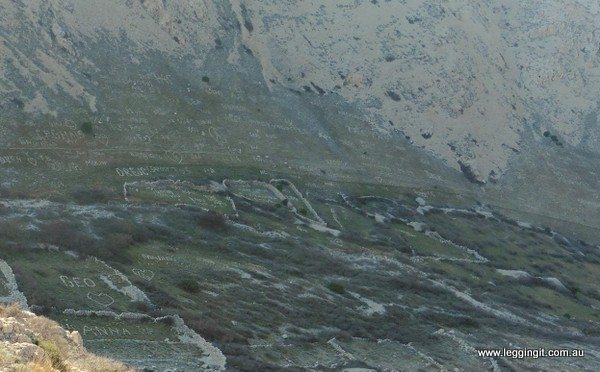 Back on the bike we traced the coastline passing through the town of Punat with its marinas before riding over the barren hills down to Oprna Bay. Along the way we passed through a few areas where locals grazed sheep and grew olives. The farmers who eek out a living on this island must be hardy people. There was also an area where people had spent wha tlooked like hours writing messages in the rocks. 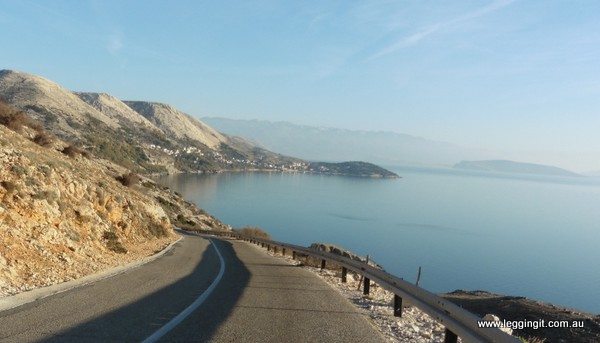 When we reached Stara Baška the road ran out.The town of Stara Baška just hangs off the edges of the most desolate hills which provide protection from the winds which must roar across here. All around the countryside is just covered in piles of rocks. It’s makes an interesting contrast to the beauty of the coast. Crystal clear water, tiny fishing boats bobbing at anchor, it’s easy to see why people fall in love with this place.
As the sun was starting to set we headed for home through the centre of the island where a few locals make a modest living off the land. Small villages, bays, boats at anchor, stone walls and piles of stones. A real snapshot of island life on Krk. Such a beautiful place to visit. Maybe next time we’ll stay longer and not forget our bathers.
The sunset across the island as we crossed the bridge was magnificent and as we arrived back in Kraljevica we enjoyed the last rays of the sun across the bay.