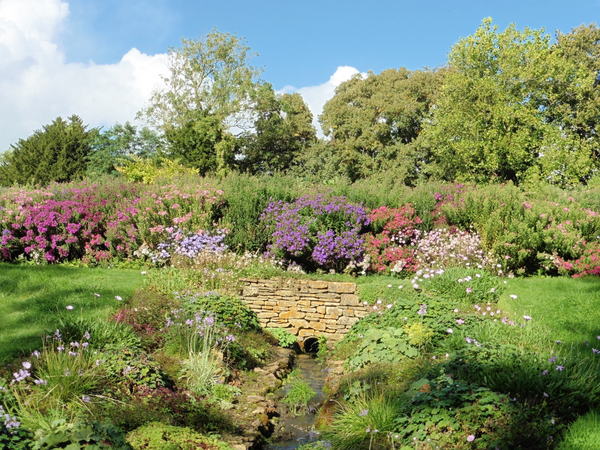 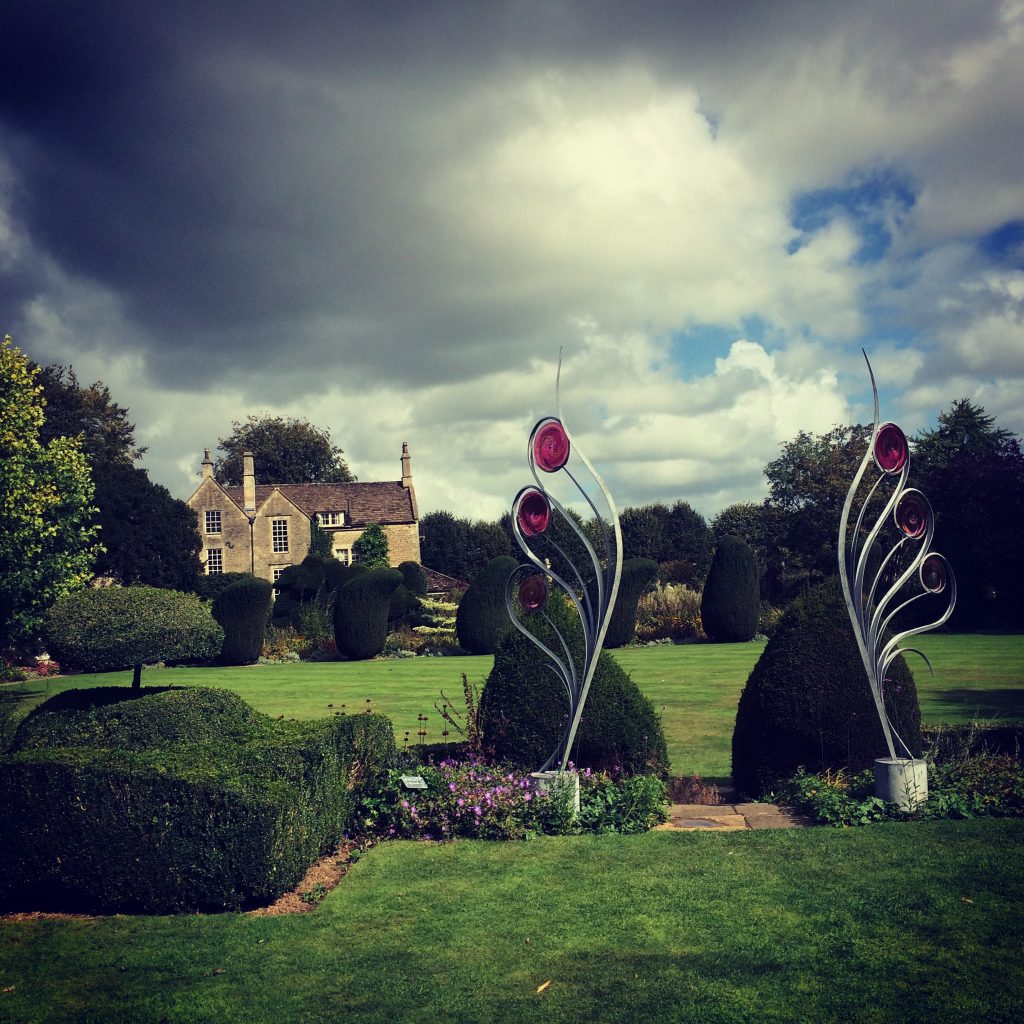 Today we visited The Courts Garden, a National Trust property in Holt a small town near Bradford-on Avon. The Courts Garden was the site of the former Holt Woolen Mills which due to the collapse of the wool industry in Wiltshire closed in 1885. All the stock was auctioned off and the mills lay abandoned for a number of years. The mill was eventually purchased , on the cheap, by William Davis, a grandson of the original mill owner who set about transforming it. The mill buildings were knocked down and some modifications to the house transformed it into a beautiful Victorian house. 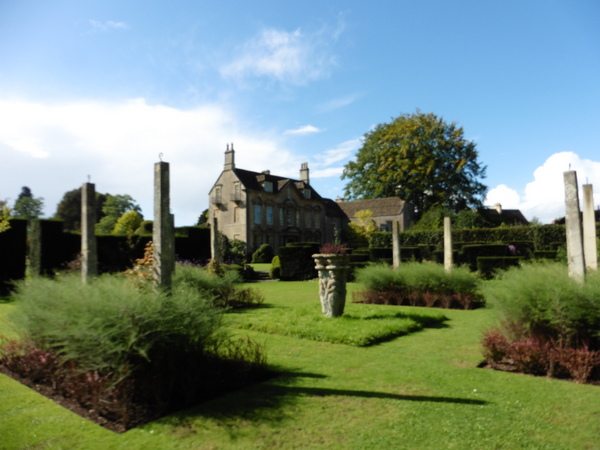 The gardens were laid out in the early 1900’s by Dr George Hastings. He added the garden buildings, hedges and laid out the paths. He was a founder of the Ranelagh Club and the ornamental design of the gardens was a copy of these gardens. The next big impact on the gardens was Lady Cecilie Goff, the wife of Major Clarence Goff, who used the theories of Gertrude Jekyll the great twentieth century garden designer to install the Lily Pond, Dye Pond, Terrace and main lawn.

Changing fortunes for the Goff’s due to World War Two saw negotiations for transfer of the property to the National Trust. The Goff’s stayed involved with the development of the gardens and today it’s a beautiful and also fascinatingly designed garden. 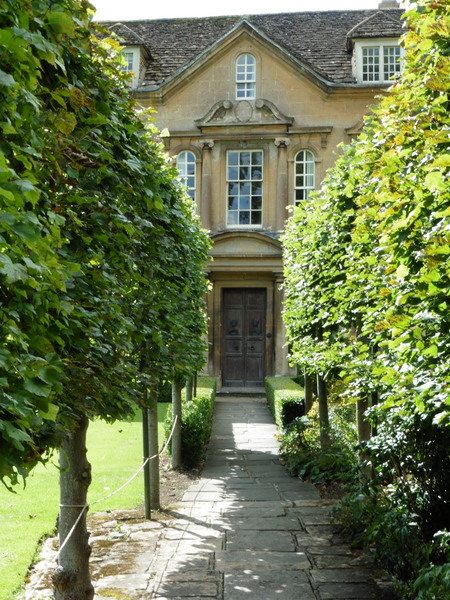 Entering the gardens the wooden entry door of the house was framed by and avenue of espaliered trees leading to it. Wandering around the grounds there were some great features. Sculptured yew trees, hedges of uneven heights, and paths meandering through mass plantings were real features. One line of yew trees had been sculptured to look like they were being blown by a hurricane. 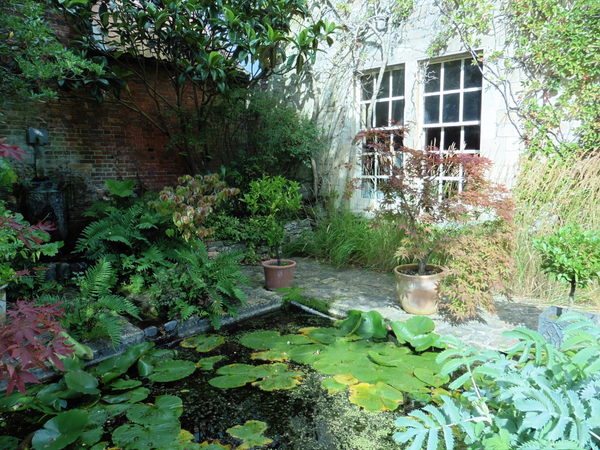 There were lots of small hidden corners in the garden amongst the hedges with seats to sit and take in the gardens beauty. In the house garden, apples hung from the curved pergola which was a lovely feature. Nearby the orchards were full of fruit with apples of all different varieties overflowing the trees. Some of the old mill channels at the rear of the gardens had been converted into water gardens giving it a mix of natural and man made.
In one of the old garden sheds displays tells the history of the gardens and the characters involved in the development and design. There were also stories of the life of mill workers of the area. It was a nice touch. The weather wasn’t very kind and we had to take shelter on a bench beneath a tree in a secret corner of the garden. It cut our visit to the gardens short.

In between cloudbursts we decided to head to Great Chalfield Hall, not far away. 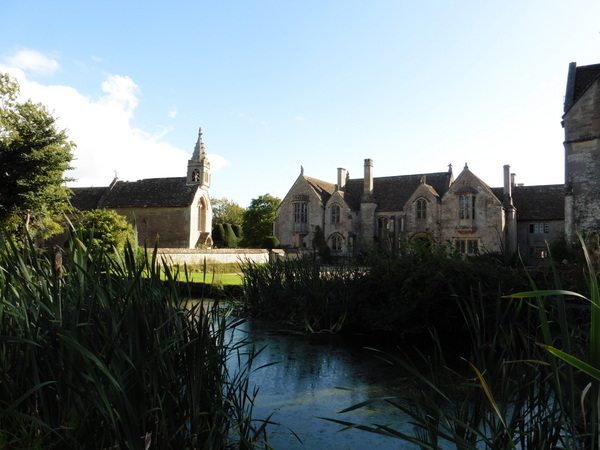 Great Chalfield Hall is a manor house a few miles from Bradford-on-Avon. The house is a National Trust property which the Floyd family still live in and manage. A single lane country road leads to Great Chalfield Hall and as we drew close to the property we were surprised to discover there was no parking onsite. Instead visitors were forced to park on the edge of the road. It must be a nightmare during harvest and planting seasons with huge harvesters and tractors trundling down the narrow road. 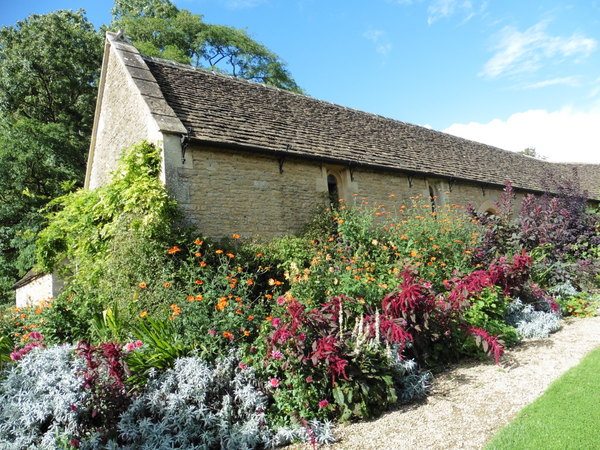 Entry into Great Chalfield Hall is by timed ticket and we arrived a few minutes after the hour so had to wait an hour. It gave us a chance to look around the outer buildings, gardens and visit the tearoom. The features of the garden are yew hedge houses. They’re quite an interesting feature where a group of yew trees were planted together and then trimmed to form a hut. These green domed hedges in the middle of the garden garden have paths leading off in four directions. 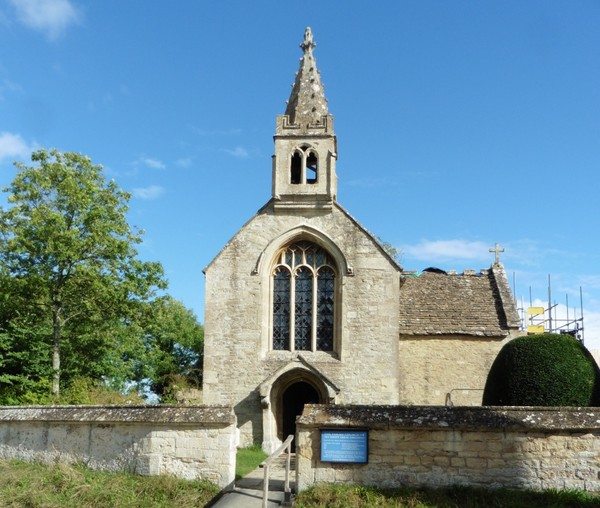 Near the front of Great Chalfield Hall is All Saints Church a small church with origins in the early 1300’s. It’s a lovely little church with a few nice features. The nave is separated with a lovely wooden rood screen which features birds. On the side of the nave a chapel built by Thomas Tropenell is separated from the nave by a stone screen featuring the coats of arms of the families associated with the Tropenell.
On the hour we were greeted at the entry by the guides who told us a little history of the house. 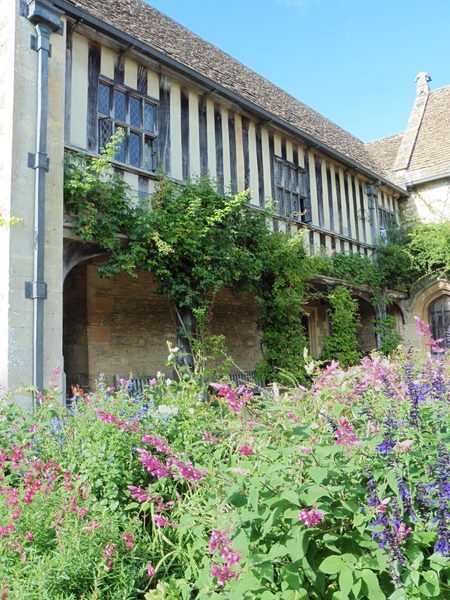 Great Chalfield Hall dates back to around 1467 when crafty Thomas Tropenell staked his claim on the De Percy inheritance and as a result built a moated manor house on the site. Thomas Tropenell had made his money from the textile industry but had made a few very powerful enemies along the way. He was also steward and friend of Robert Hungerford the lord of nearby Fairleigh Hungerford Castle. They were both supporters of Henry Tudor and the Lancastrian cause in the War of the Roses. Thomas’ friend, Robert Hungerford had lost everything supporting the Lamcastrians. He was hung drawn and quartered at Newcastle by Edward IV after the Battle of Hexham with all of the Hungerford land was confiscated by the crown. It was dangerous times for Thomas as he was condemned by the crown so he had to live by his wits. As his house was in the countryside with no support, it had to be defensive. Thomas designed the house with this in mind using stone from his own quarry. With a moat surrounding it, a central well and small windows with good visibility it was easily defensible.
It also had many features which visitors would instantly recognise about qualities of the owner. Gables on both ends of the manor with oriel windows, and lower gabled porches give it a sense of symmetry and balance. One of the porches covers the entry, to a 500 year old oak door.

It isn’t any old door but a double layer door with exterior timbers running vertically and interior timbers running horizontally. For a door to last 500 years it must be good quality timber. The door was built to withstand axe attacks, and features a wicket door. It’s a small door within a door so that only one person at a time could pass through at a time. It was awkward to get through and anybody passing brought it could be easily overpowered. The main door wasn’t just secured with a lock but rather an oak beam. Also in the porch was squint. A small slit to see who was on the other side.

Entering the great hall we were transported back in time with the heads of stags, tiger and sloth bear looking down from high on the walls. Around the walls 17th century tapestries hung giving it a real medieval feel. The great hall was originally a feasting hall and it would’ve been the perfect setting. To stop the draft the front door was separated by a wooden screen wall with goatskin curtains in the doorways. A stone fireplace and 17th century wooden furniture finished the scene. High on the walls were interesting plaster faces. Looking closer you could actually see through them for they were actually squints. From the upper rooms you could see what was happening in the hall whilst remaining unseen. The faces where quite interesting. One had a happy face, one had a mitre hat on the side and the other a kings crown with donkeys ears. Thomas Tropenell obviously was having a swipe at the bishop of Salisbury’s honesty and the Kings intelligence. Thomas Tropenell was condemned and pardoned three times and was offered a knight-ship but declined. Thomas owned over 50 properties and made a lot of money from the wool boom and was very canny with his money. At this time about 90 people were employed at Great Chalfield Hall and on the farm.

On either side of the great hall staircases led to the upper rooms in the gabled ends. The upper rooms have lovely exposed beams and oriel windows with views across the grounds. During the 1836 the Neale family had a friend Thomas Walker survey Great Chalfield Hall. He made drawings of all the buildings however the restoration work was never conducted. By the late 1800’s Great Chalfield Hall was in bad shape with the roof collapsing on one gable, walls falling down and the rear range collapsing. In the early 1900’s Robert Fuller purchased the property and using Walker’s drawings rebuilt the collapsed gable and re-roofed the house. The rear range was demolished and some of the material reused. One gabled end which contains Thomas Tropenell’s bedroom is still original with exposed beams. In the bedroom is an interesting four poster bed from the 1700’s. The bed was designed with a wooden hatch in the top so the owner could open it whilst smoking in bed with the curtains closed.

Another interesting piece was a tricycle with two horses at the front and a basket at the rear. Supposedly there is only two in existence and the other one is owned by Prince Charles.

The Fullers, who bought the house in the early 20th century were keen music lovers. They installed a Minstrels gallery over the great hall and often held dances there. Robert Fuller had married the Chappel piano heiress and one of their company’s piano is in the state room. It also explains their love of music.

In 1943 they passed the house to National Trust and the descendants of the family still live and work the farm.
Great Chalfield Hall is the setting for many movies. Parts of ‘The Other Boleyn Girl’,’Tess of the d’Urbevilles’, ‘Wives and Daughters’,’Wolf Hall’ and ‘Poldark’ were all filmed here. We’ll have to look closely to see if we recognise Great Chalfield Hall.

Heading back to Warleigh the satnav picked the smallest roads to direct us down. It seemed like the satnav directed us down every tiny little one lane track on the way home. Surrounded by high hedges with grass growing up through the bitumen whenever we’d meet traffic it was a Mexican standoff until one of us reversed up.

With a forecast of rain over the next few days we may not be venturing too far away from the farm. Hopefully, I won’t get too wet walking the dog up in the woodlands.