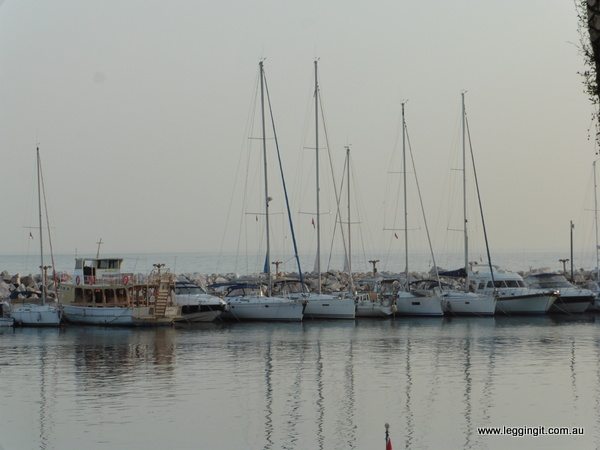 The wind was howling and the sky was a little grey again as the mistral seems to have set in. Yesterday was a real washout due to the weather and we thought it would have blown itself out by now. After one of the best breakfasts we’ve had in Turkey we headed off. Today we’re heading from Çesme to Kuculkkuyu on our way to Gallipoli. Originally we were going to visit friends in Izmir and then head on to Istanbul with Gallipoli our final destination but our plans have changed a they are on holidays.
The ride along the coast to Izmir was hard going. From Çesme to Izmir is only about 60 km’s but with the mistral blowing we were weaving all over the place. It wasn’t a cold wind however as it blew from the east off the desert. Riding with the visor up meant that sand would blow into your eyes so we just boiled in our helmets.
We made it to the beach side suburbs on the edge of Izmir and decided to have a break. We realised that today was going to be a long hard ride. Whilst we were taking a break we noticed a guy setting up a kebab stall in the carpark. It was a simple setup just a small metal cabinet with a burner, a roll of kebab meat and four small stools to block off the area around his stand. After a drink we headed off through Izmir.

Izmir was a lot larger than we expected. We passed through the edge of it a few days ago on our way to Çesme but we weren’t prepared for the slow grind of the traffic and it took a frustrating hour to ride across it.

Eventually we made it to Menemem where we took a break at a roadside cafe. It was nice to have a cup of tea and cool down a bit as the last two hours certainly were slow going.

Passing out of Menemem the country opened up to farmland with big flat area covered in fields of olives and wheat. All through the area olives grew from the flats right up over the lower hills. Around Dikili a giant tomato on a post signalled the areas main crop. Hundreds of hothouses dotted around the area growing tomatoes.

Not far past Dikili we took a detour to Aycalik, a picturesque seaside town. It was one of the towns we had thought about staying at. Riding into Aycalik the road wound down a pine covered hill then along the coast into the town. The heart of town was quite busy with a section of streets near the wharf filled with markets, shops, cafe’s and restaurants. Near the water we stopped off at a large restaurant adorned with pictures of seafood only to find the only thing on the menu was toasties. It wasn’t worth the hassle to relocate so toasties and tea it was. The place was pretty packed with people chatting over cups of tea and the view of the boats on the water was great.

Heading out of town we missed the turn and took a short cut back through a small stone village. It was filled with lovely old stone houses and narrow cobbled streets. Eventually we made it back onto the highway and were soon heading east to Kuculkkuyu. Olives covered the whole area for hundreds of kilometres with the occasional processing plant and field of wheat. Not far out of Kuculkkuyu we stopped for fuel and experienced one of the nice traditions in Turkey. In Turkey apart from driveway service, where they fill the tank of your vehicle, in the rural areas they serve you tea. They even had little huts to relax in. 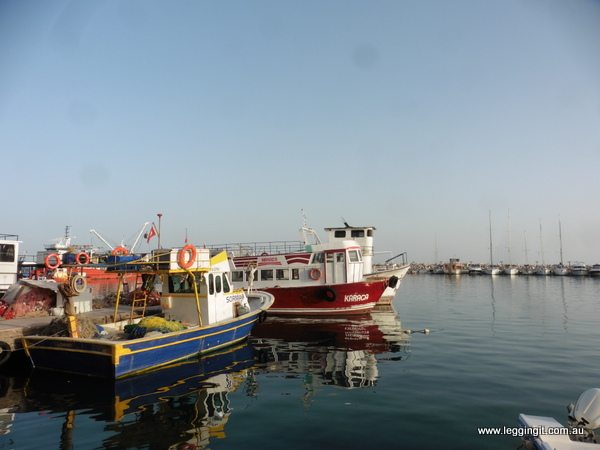 Eventually we made it into Kuculkkuyu where finding the hotel wasn’t a simple venture. There were hardly any street names and after searching up and down the main highway. We tried searching through the seaside streets but as it was market day most were blocked off. After riding all day, we were hot, our butts were sore and we couldn’t find a wifi network it triggered a bit of a meltdown in Michele. I parked the bike near a cafe and started walking to find somewhere with a wifi sign. Eventually we stopped at a kebab shop and simply asked. Sure enough they had wifi, we logged on, found the hotel (4 minutes walk away in the middle of the market area) and had a drink to cool down.
The hotel overlooked the fishing boat harbour which apart from various sized trawlers had a long line of restaurants. We had a first floor room overlooking the whole scene which was sheltered from the mistral. After a shower we took a walk along the harbour front checking out the various restaurants and cafe’s . It was a nice area, with lots of al fresco dining, a few trees, and a few thatched roofed huts on the wharf giving it an almost tropical feel. 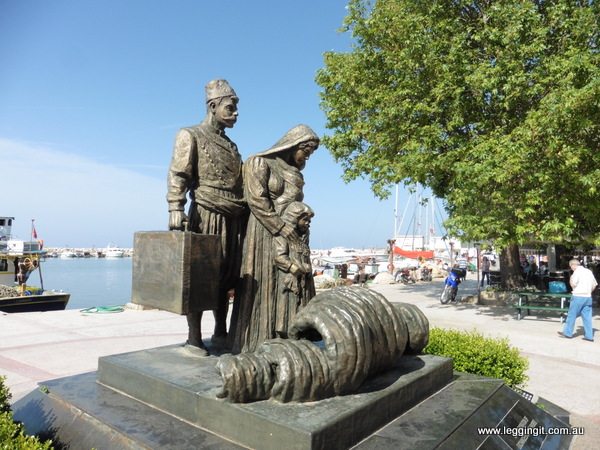 A bronze statue of a man carrying a suitcase, alongside a woman carrying a baby stood in silent tribute to families uprooted by the population exchanges after the Greek war of independence. It was a very moving statue. 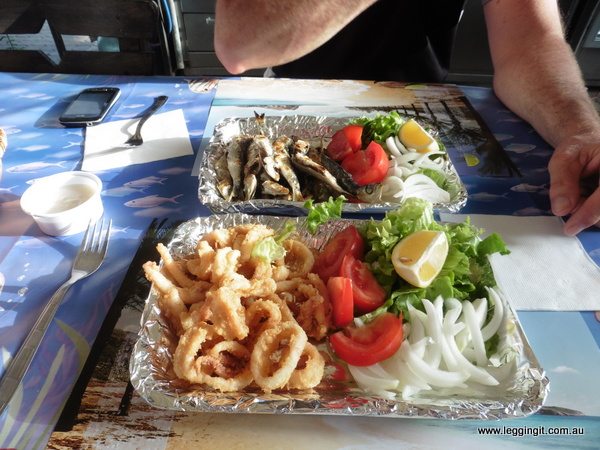 A tiny local fish restaurant with three tables caught our eye and we settled down to a meal of calamari, sardines and salad. A little surprised that we weren’t at the big restaurants a few locals started chatting to us, asking about our travels.
As the sun began to sink we headed back to the hotel to relax on our balcony and watch the scene below us. Dogs and people wandering along the wharf, cats stalking the customers at the restaurants.

After an overnight stop in Kuculkkuyu tomorrow we have just over 100 km’s to travel to Gallipoli and may even stop off at Troy along the way.