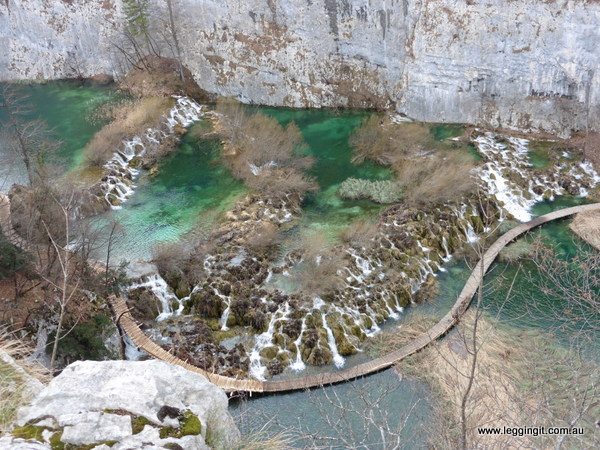 Today we took a run down to Plitvice Lakes, we had seen many beautiful photos and had wondered what it would be like in the off season.

After parking close to the ticket office, the first bonus is you always get a park close to where you want to be.

We bought our tickets for just 55 kuna, not a bad saving as they’re usually 180 kuna. The top section of the park was closed and some of the board walk was being repaired but the track to the main waterfalls was open. For us the bonus was there was a boat going on the hour and a shuttle bus, we had read they did not run in Winter so were prepared for a lot of walking . 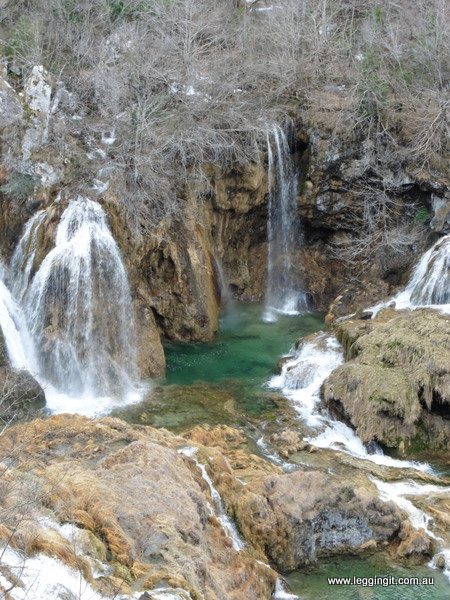 There are some bonus’ for visiting off season. The biggest one is the park is empty. During the summer months we’ve heard that the boardwalk is so packed that people are regularly rescued after being knocked into the water.
Today there was was maybe thirty people maximum in the whole park. The trail down to the main waterfall has recently been repaved so we were pretty impressed with the surface of the trail. The trees have lost their foliage so the views across the river and series of waterfalls was improved. We wandered down to the river and crossed the boardwalk. Above us a small waterfall emptied into a small emerald green lake which flowed under the boardwalk to the next series of small waterfalls. It was just magical. 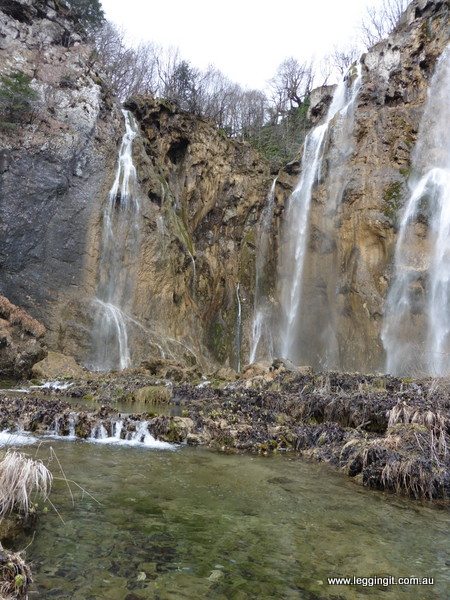 The boardwalk traces around the base of the cliffs where a series of waterfalls empty into the river below. It also leads to the Great Waterfall.

The great waterfall is one of the main features of the park at 78 metres high and is fed from the Plitvica River above, separate from the rest of the lakes. 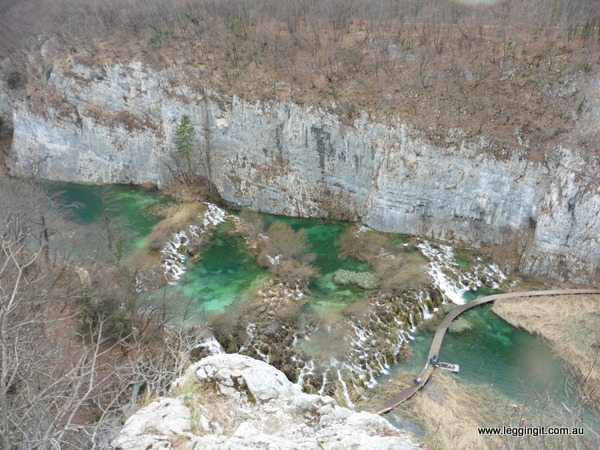 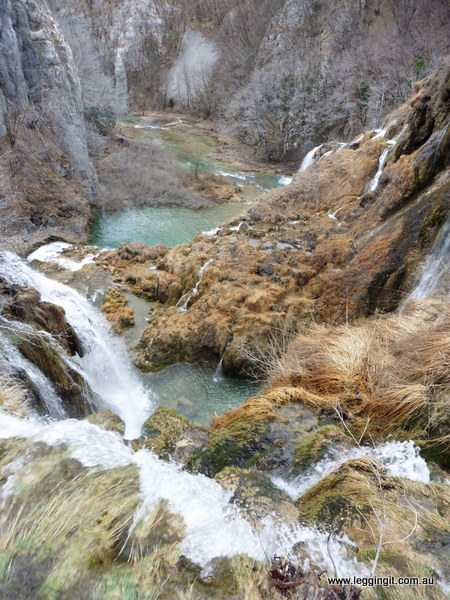 We crossed the boardwalk to the main lake and made our way to the ferry landing where we found a coffee shop open. It was great timing for soon light misty rain was falling. It didn’t dampen our spirits for we had the choice of tables under the patio roof and a hot cup of coffee. On the hour the ferry arrived along with a tour of about fifteen Chinese. Even though it shattered our peace a bit we could only imagine what it’d be like in summer with people all jostling to get a seat on the ferry. 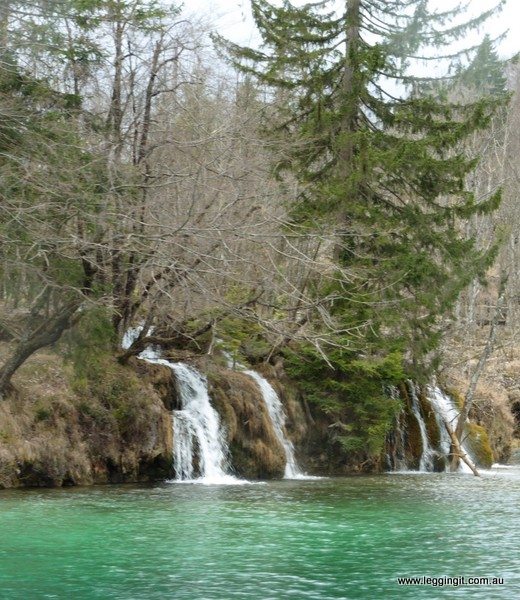 The ferry slowly crossed the lake passing close to the waterfalls near the ferry terminal. It’s interesting seeing how the calcium in the river builds up to form lakes and then spills over in little waterfalls. 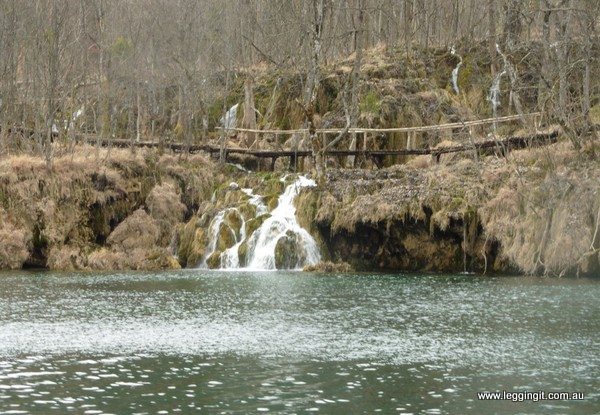 At the top of the hill near the ferry terminal a shuttle bus was waiting to take us back to the bottom of the park and after a few minutes we were heading back to the bike.
We headed north out of Plitvice to Slunj where we found a great restaurant, Feniks. It had quite a few locals in it which is always a good sign. The waitress recommended the Gulaš with potato, which on a chilly day like today was the perfect meal. 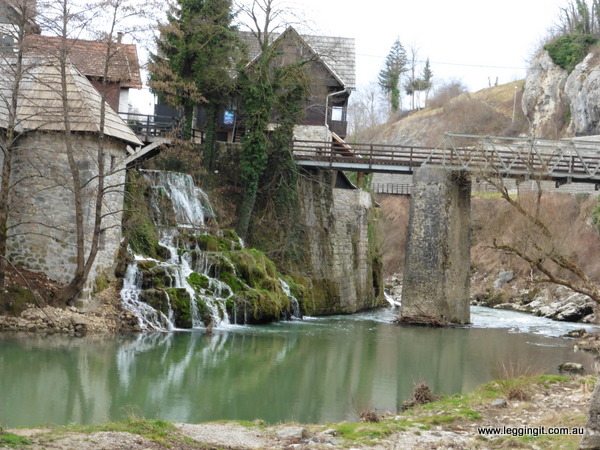 After lunch we headed into the old town of Slunj, another one of towns where the Francopans ruled. In the lower part of the town, in an area called the Rastoke there were supposedly 22 water mills. It really is a picturesque area with lots of old mill houses built over the many off shoots of the Slunjčica river and lots of small waterfalls. 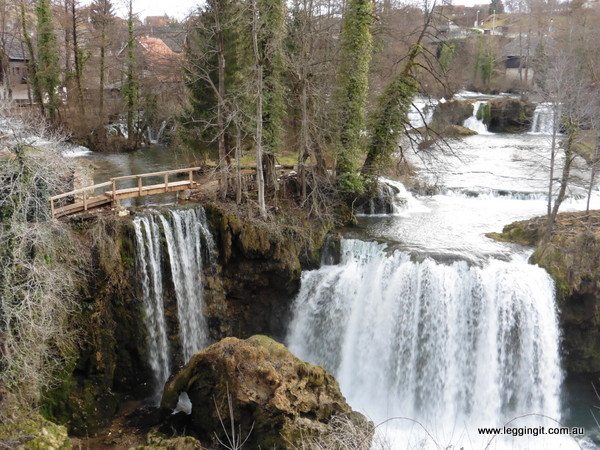 There’s also the main waterfall which supposedly is the greatest volume waterfall in Croatia. There’s also a few cafes, restaurants, apartments and picnic spots overlooking the river. It really is quite a quaint spot.
Heading east we took a look at the countryside not far from town. Around this whole area there really is an odd landscape filled with massive potholes. It looks like the place has been bombed the crap out of, however it’s a natural phenomenon. The local farmers grow their crops in the potholes. Around the area there’s lots of new houses which haven’t been finished. 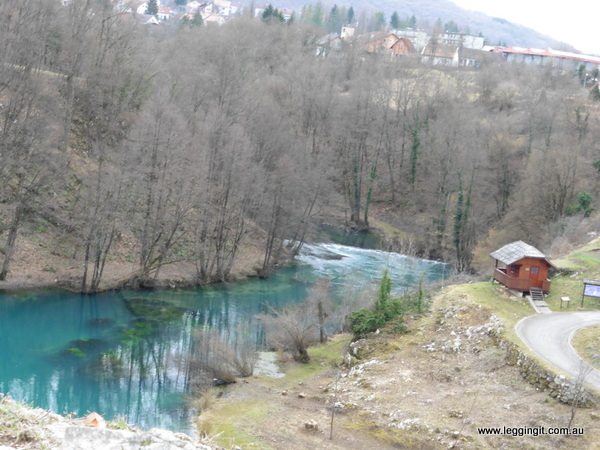 The old Francopan tower took my fancy so we took a ride around it to discover it’s currently being repaired. It’s much better to see buildings like this repaired rather than just another crumbling ruin. Michele wasn’t very happy when I headed down the steep track leading down along the Slunjčica River. It gave us a great view of the river which was a brilliant sapphire blue. It’s quite unbelievable how Plitvice is so green but Slunjčica is soooo blue. After crossing the bridge the noise on the back of the bike increased as Michele’s level of protest increased as she saw the steep hill leading back into town. Dropping down to first gear I just twisted the throttle and with Michele holding on for dear life shot up through the houses passing the no vehicles sign.
Heading back to the apartment we both commented on how beautiful the area was. It really has been worth the visit. Tomorrow we head to Zadar and hopefully the weather will stay away.