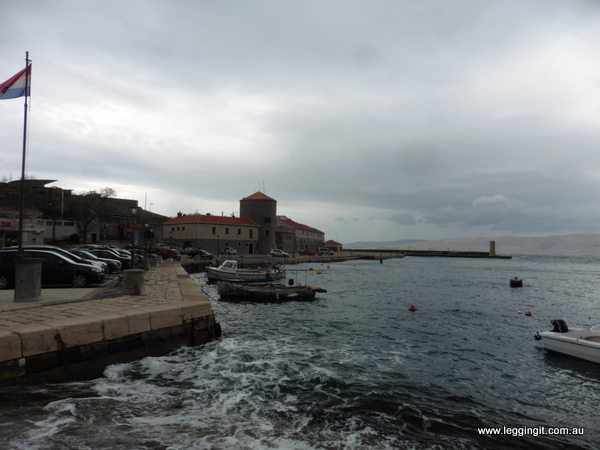 It was pretty hard getting out of bed this morning. Just the sound of light rain falling against the windows of the apartment had us snuggling down under the doona. After a quick run across the street for a loaf of bread we settled down for breakfast and to check the weather forecast. The inland route, which runs up close to the border, was Michele’s preferred route. Looking at the forecast I thought the coastal road might be a little better, if we got our timings right.
Decked out in our wet weather gear we packed the bike and headed off with light rain falling on our journey from Rijecka to Plitvice Lakes. Heading through the centre of the city it was amazing to see how clean the city was. Yesterday there was so much rubbish on the streets due to carnival, but today nothing.

By mistake I missed the turnoff for the coastal road and ended up on the freeway to Krk. The first part wasn’t too bad as we travelled through the tunnels coming out of the city. When the road emerged on the top of the hills overlooking Bakar we were buffeted this way and that by the squally winds.
There were great views down over the bay towards Bakar and it was nice reminiscing about visiting there during our stay in Kraljevica. Just before Krk we took the turnoff to Crkvenica and we were on our way south along the coastal road.

It was quite nice seeing the contrast in the countryside with rain squalls lashing the coast and the normally tranquil waters now crashing against the shore sending spray high into the air. As the road hugs the coast some of the bends were a bit tricky as the winds buffeted us but we kept to a steady speed and just enjoyed the ride. 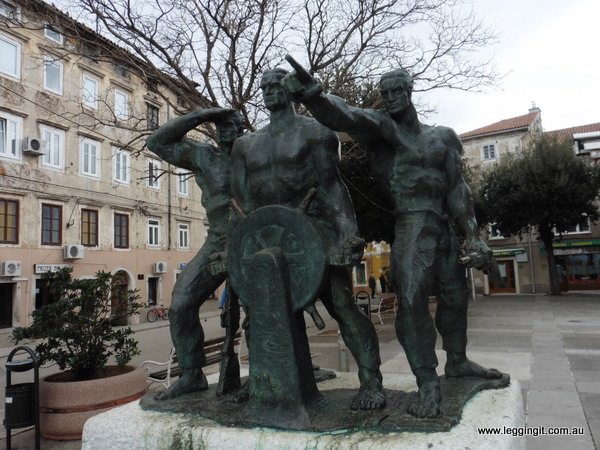 Our first stop was Senj, and we headed back to the cafe we stopped at last time we stopped here. The boats were all bobbing at anchor as waves whipped up by the winds crashed into the jetty of the boat harbour. As forecasted the rain had stopped so a little wind wasn’t so bad. Senj is an interesting coastal town with cobbled streets in the centre, old city walls surrounding it and a mixture of old and new buildings. It became a partisan port after Italy surrendered during World War Two and was bombed extensively. In the square there’s a statue to the partisans who sailed the Adriatic coast. Not far from the centre Nehaj Fortress sits on a hill overlooking it. A large square building with nothing surrounding it which makes it look out of place.
After a coffee it was time to hit the road and after passing through town we took the 23 up through the gorge. The road slowly wound its way up the coastal mountains zigzagging back and forth before crossing over the top. It was slow going all the way up and again on the way down into the flatlands of the interior. Along the sides of the road and on the surrounding hills there were patches of snow left from the last big snow fall. The rain never let us alone for too long and as soon as the rain would ease off we’d get hit again.

Around the area there were lots of newish houses made from clay breeze blocks which obviously were built off the same plan as they all looked the same. Surprisingly they weren’t plastered so they all looked a bit unfinished. It’s a bit like this in many places in Croatia. People make money in the warmer seasons and after putting aside money for the winter use the remainder to build houses or extensions. Nobody here loans from the banks. A few of the older houses were built from timber but plastered over to appear as if they were made of brick. 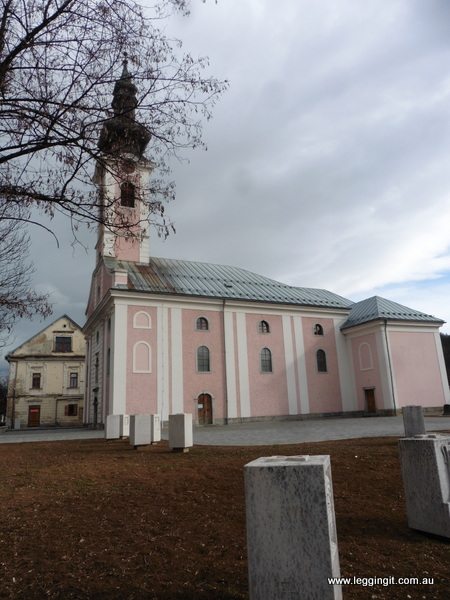 Arriving in the town of Otočac we stopped at the Holy Trinity Church when we noticed a heap of monuments. They were dedicated to all the important figures associated with Otočac, including Žikmund Frankopan who was also associated with Kraljevica where we stayed previously. 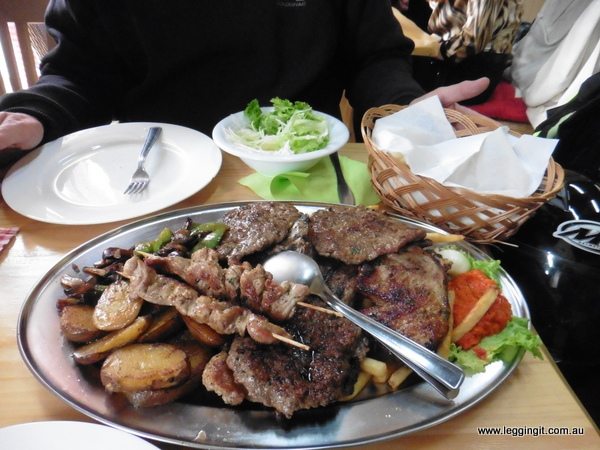 Across the road an interesting Memorial to fallen Croatian defenders of the Croatian War of Independence.
As it was lunchtime we headed across the road to a little Konoba to find it packed with locals. The lady in the konoba decided we were Germans and started conversing in German with us. We ordered lunch and soon a bowl of soup, a salad and a tray of mixed meat arrived. As usual there was more than enough food for a whole family let alone just two people.

After lunch we headed on to Rakovica, with the rain falling, passing Plitvice Lakes along the way. As we passed it we caught glimpses of some of the waterfalls and emerald green waters. Wow from just the few waterfalls we saw, we are really looking forward to going and checking this area out tomorrow.

We arrived in the town and once again the satnav took us up a street which we knew just didn’t look right. After backtracking to the main road we found the info map and sure enough the apartment we were looking for was not where the satnav had taken us. 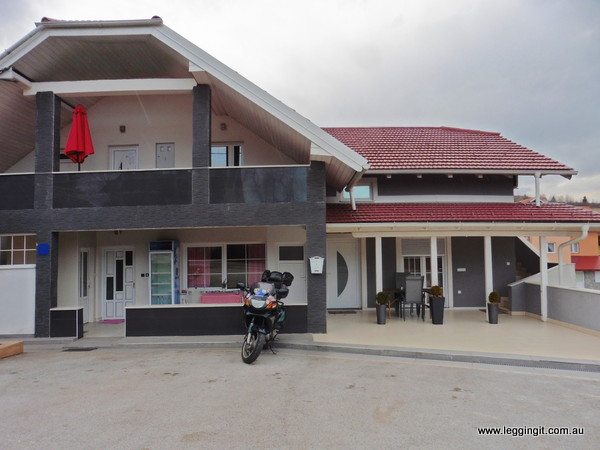 A few minutes later we arrived at the apartment which was deserted despite the television in the main area being on. Michele knocked and looked around but couldn’t find anyone. I was just starting to write a text when the Croatian version of granny Clampett came wandering out. She’d been watching the TV and was having a nanna nap. She couldn’t speak a word of English and we told her we couldn’t speak croatian but she kept speaking Croatian regardless. There were a few words we understood (Rakija being one of them) and pretty soon she reappeared carrying a tray with two little crystal jugs of local apple brandy. One thing about Croatians they love their Rakija and all the different versions of it. We thought maybe old granny might have been hitting the Rakija because she was a happy soul and after our welcome drinks she ushered us to our room. It was a really nice apartment with a view of the farm buildings next door and the surrounding countryside. Best of all we got it for 40% off. Just another great reason for visiting Croatia off season.
After settling in we headed to the local bar for a coffee to counteract granny’s Rakija phew it was strong. The forecast for the next few days isn’t looking good. There’s a chance of rain tomorrow and snow on the following day. We’re really looking forward to visiting the lakes. It would be amazing seeing them surrounded by snow however, that’s tomorrow.