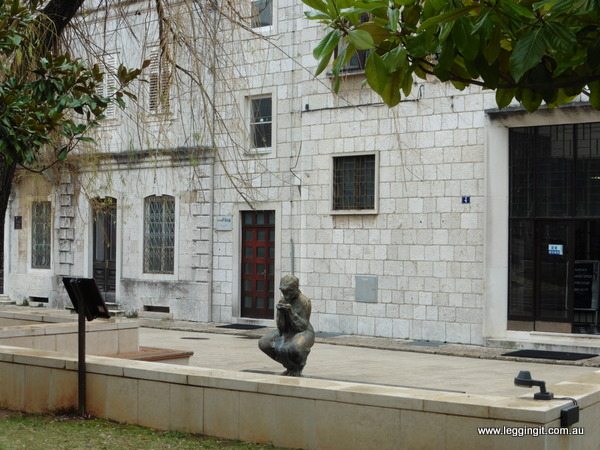 The weather was pretty overcast as we headed towards Sinj today. Winter has finally arrived in Croatia, with snow on the mountains just off the coast and heavy rains. A waterspout hit Split a few days ago bringing down trees, light poles and causing a little damage.
We passed through Sinj a few weeks ago when the weather was just spectacular and we’ve been meaning to get back to have a look around. 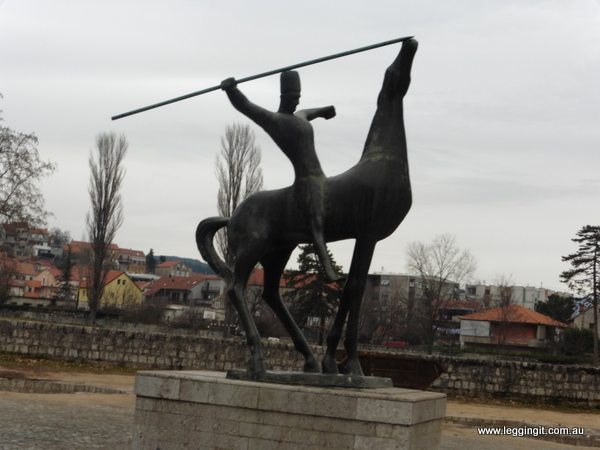 In the middle of town a statue of a Croat on a horse pays homage to the people who saved the town during the Ottoman siege of 1715. During the Ottoman invasion the town of Sinj was conquered, the church razed, and the people enslaved. This was nothing new for the residents of Sinj, for the town had been invaded back in 1524 by the Turks. The town remained under Turkish control until 1686 when the town was liberated by the Venetians.
This time when the Ottomans invaded, those able to escape, fled to the old fortress high above the town, coincidentally built by the Turks during their former occupation. The Ottomans supposedly became incensed when the occupants of the fortress refused to surrender. The fortress was attacked several times but each time the defenders were able to repulse the attack. Supposedly a stirring speech was given to the defenders and an image of the Virgin Mary or Our Lady of Sinj (known locally as Sinjska Gospa) was paraded around the battlements. Legend has it that upon seeing the image the Ottomans immediately started fleeing. 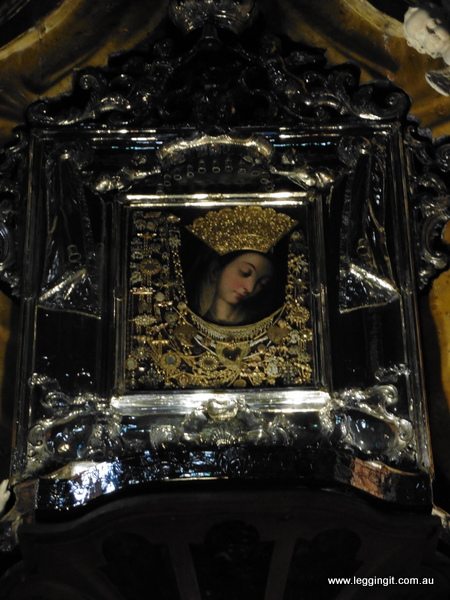 These days the town celebrates the victory on August 15th with the Lady of Sinj (Sinjska Gospa) being paraded through the streets of town. It also includes a performance in the square with a recreation of the events.
The celebrations also include a medieval tournament, known as Sinjska Alka, where horsemen try to thread their lance through a ring, called an Alka. It honours the horsemen who fought and defeated the Turks.
The painting Sinjska Gospa is housed in the Church of the Miraculous Lady of Sinj, a huge church in the middle of the old town. It’s quite an ornate painting which is much like many we’ve seen in orthodox churches. The double doors of the church record the victory over the Ottomans with a fabulous carving. Inside the church is quite beautiful with marble pillars along each side and at this time of year, a nativity scene. 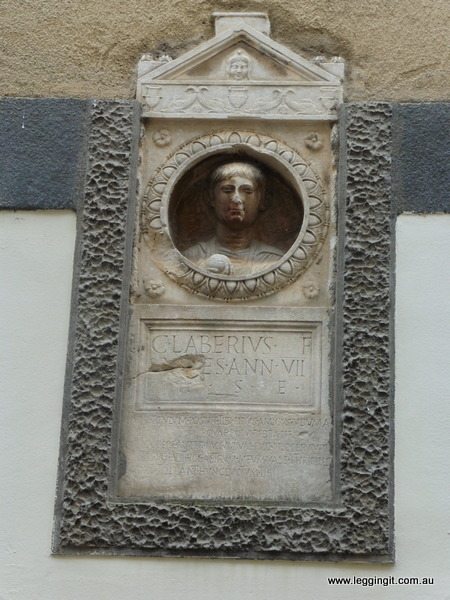 We took a walk through the old town and noticed above a shop window, a tombstone of a seven year old Roman boy, Gaius Laberius. His carved tombstone is considered evidence that football was first played in this region in the second century. Sure enough apart from his bust, in his hand a ball made of hexagonal shapes just like a modern day football. Sinj proudly claim that they are the birthplace of European football. These days all around the countryside, on buildings, on underpasses, on bridges the Torcida paint their slogans worshipping Hajduk, Split and Croatia’s oldest football club. 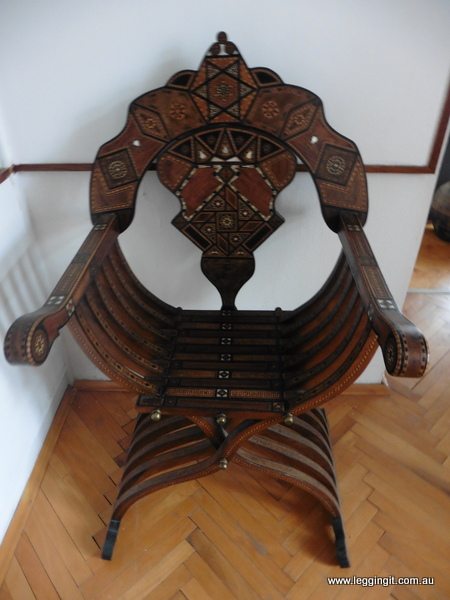 As the rain was starting to fall we headed for the museum. It only cost 10 kuna for entry but with limited English information it was hard to get a feel for the museum. The attached fort of Kamičak, is under renovation so was barricaded off. Lining the steps of the museum are pieces of Roman stonework from churches and buildings.
Inside the museum a few display cabinets trace the history of the region from the Romans to the arrival of Croatians, with artefacts such as pottery, axes, arrows, jewellry and swords. A few story boards tell the story of the Cetina region. There’s also pottery from the 16th century, traditional clothing, cannon balls and furniture from the 17th century. A real mishmash of artefacts. Of the three rooms one whole room is set up for junior explorers to conduct archaeological digs in little sand boxes.
As we were leaving the museum the rain began to fall again so our plans of riding up the hill to the old fort were shelved. We decided to call “no joy” on our trip to Sinj and head back to Split. It’s obvious that during Christmas and August that it’d be a great place to visit but on a rainy day it’s not the best destination. One bonus was I get to test my wet weather gear which I bought in France as this is the first wet day of riding since then…and they passed with flying colours.