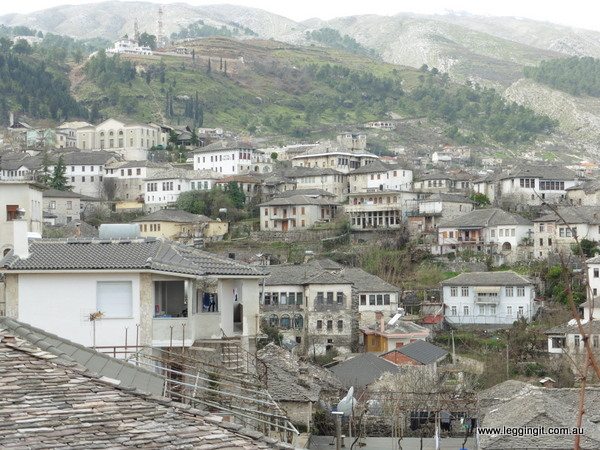 Today we took a look around Gjirokastër. First on our agenda was Gjirokastër Fortress which sits high on the hill overlooking Gjirokastër. After breakfast we were dropped off in the old part of town by the guesthouse owner Mario. The old part of town lies below the fortress and has lovely old Ottoman style buildings fronting cobblestone streets. Throughout the old town there’s all sorts of shops selling beautiful handmade lace, stone work, carved wood, souvenirs as well as restaurants, cafe’s and curio shops. The walk up the hill to the castle is quite steep, however there’s also a bus which runs up this route. 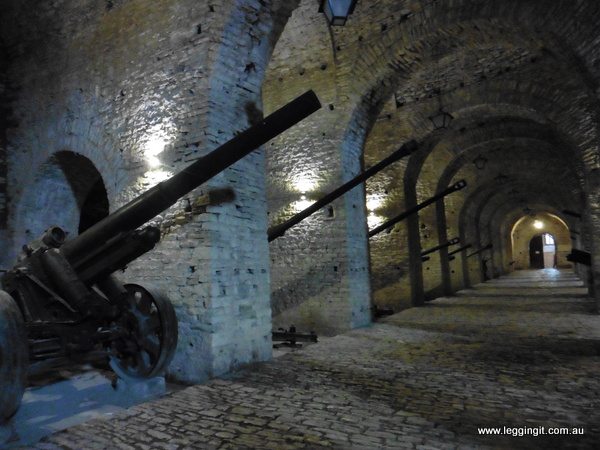 Arriving at Gjirokastër Fortress we paid our 200 Lek entry fee and entered. Along the long gallery which leads to the centre of the fortress is a collection of field guns. In the half light they look fascinating with their barrels sticking out between the pillars into the passage. They’re a mixture of German and Italian artillery pieces which were captured or abandoned during WW2. There’s also a little Italian tank which has seen better days. 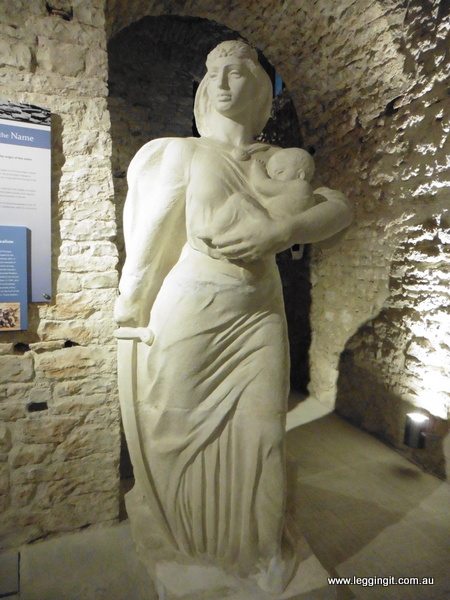 At the end of the passage is the Museum of Gjirokastër, another 200 Lek. Honestly, it is one of the best museums we have visited in a long while. In a logical order it traces the history of Gjirokastër and some of the people involved.

The Gjirokastër Fortress was built in the 12th century and it had some major expansion after the Ottoman occupation in the 1400’s. During the early 1800’s Ali Pasha, the local governor, strengthened the defences as he expanded his influence and went against his Ottoman masters. His story is one of the many stories which are interwoven with the history of Gjirokastër and Albania. He was quite brutal and his story fascinating as he tried to carve out his own empire from the Ottomans. At one stage he was allied with Napoleon before switching sides to Britain. Eventually he was shot and his head presented to the Sultan in Istanbul on a platter.

Throughout the museum are lots of famous and not so famous figures. Stories of people such as the tiler who repaved the streets to the castle, revolutionaries, poets, writers, kings and Gjirokastër’s most famous son, Envar Hoxha, an interesting mix of people. There’s also displays of local traditional costumes, pictures of the local fortified houses and stories of their owners.
Upstairs from the museum a small part of the castle is set aside as the Prison Museum. During the reign of King Zog in the 1930’s the fortress was converted into a prison for use for his political prisoners. It continued to be used during Italian and German occupation, and the communist era up until it closed in 1968. Subsequently a single corridor of cells complete with graffiti and signs (unfortunately in Albanian) composes the museum. 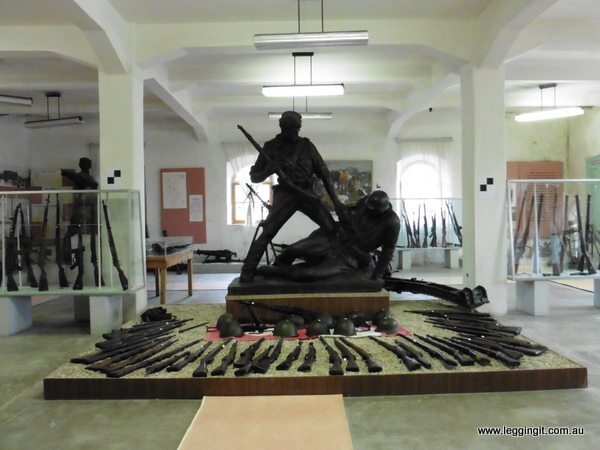 On the same floor the Armoury Museum displays a wide range of weapons mainly from the Second World War. A few communist statues and paintings from the war are also on display which are interesting in their symbolism. There’s also a few old flintlocks and rusty old swords. Unfortunately this museums displays are completely in Albanian and looking a bit shabby.

Wandering around Gjirokastër Fortress there’s great views across Gjirokastër old and new city.
Looking around the hills the Ottoman style houses are visible. Half house half fort the two storey houses are built in the most precarious location with no windows in the lower level and square turrets at the front. They were built to fend off any rivals. 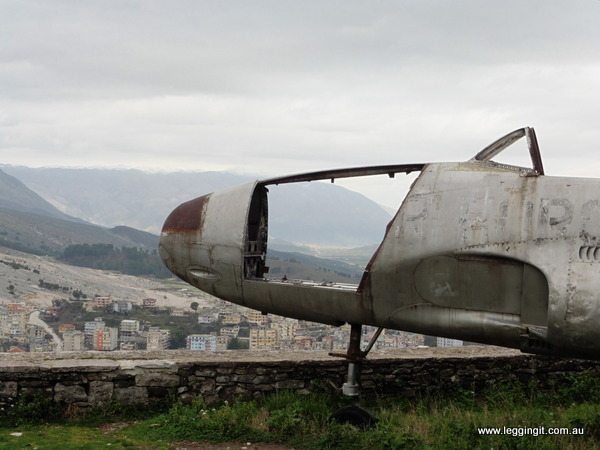 Also in the grounds of the Gjirokastër Fortress is the remains of a United States Air Force T33 Shooting Star jet. Supposedly the “Spy Plane” was shot down over Albania in 1957. In reality the jet developed technical problems so the pilot was forced to land at Rinas Airport, near Tirana. The “Spy Plane” helped Envar Hoxha convince the population that Albania was in danger of invasion by the west, and further instil the paranoia which existed.
Leaving the Gjirokastër Fortress we headed down the hill following the signs to the old bazaar. 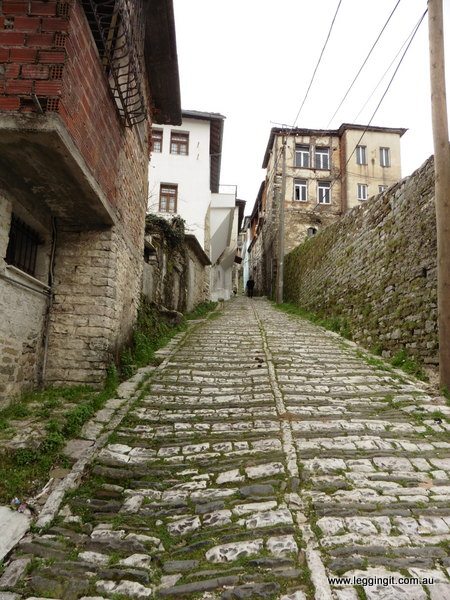 Bizarrely the old bazaar these days is just a suburb of old houses with narrow streets. The bazaar is long gone.

The houses are quite interesting with roofs covered in limestone slab tiles. The slabs just sit on the roofs and are not cemented in place so supposedly when it rains someone has to go on the roof to fix leaks. 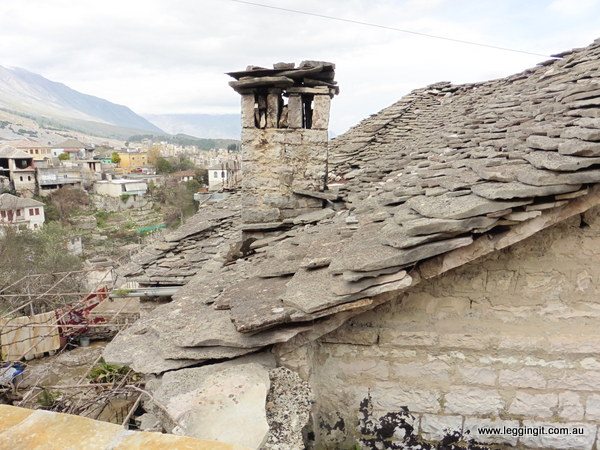 After walking around the old bazaar we headed back to the old town where we found a local restaurant with just two tables on the street. The owner served us local specialities as we watched a poor guy dodge traffic as he tried to retrieve a few coins he’d dropped on the cobbled street and were firmly wedged between cobbles. For the best part of twenty minutes he tried sticks, wire and finally a pair of tweezers to retrieve the coins. Meanwhile cars and buses zoomed up and down the cobbled streets.

The food and service at the restaurant was really good and we were sent on our way with some baklava.

Walking home to the guesthouse was a real trek, with the up and down hills compounded by the city heat. After a long hot walk we arrived at our cafe from yesterday where we took a rest and coffee before heading home. Mario’s mother delivered another batch of her delicious feta and spinach pie so we decided to put our feet up and relax for the night. Tomorrow we head to Sarandë.