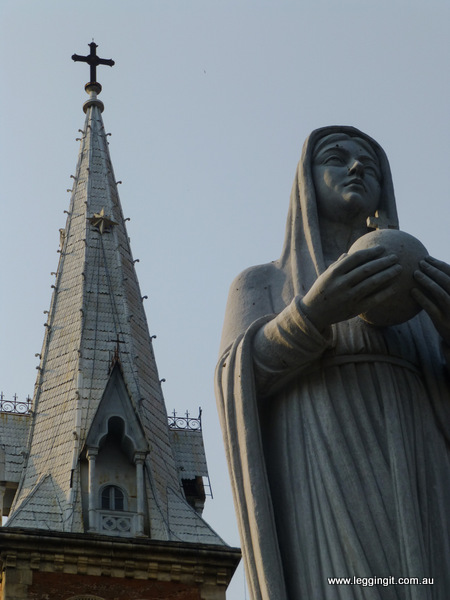 After spending the morning riding around Ho Chi Minh we looked around locally for a cafe on Cong Quynh and saw a sign reading “Bacon Makes You Sexy”. Hmmm We’d better check this out. The Hungry Pig restaurant specialises in Bacon mmmmmm. Michele ordered a BLT, bacon lettuce tomato on a baguette. I a “Notorious Pig” heaps of bacon and salad on a baguette. I washed mine down with a coffee, which was man sized, probably about 1/2a litre. They just half filled the coffee pot and poured it straight into my mug, how good I just had to have another.

We decided to head over to Notre Dame Cathedral, through 23/9 park which runs along Le Lai. The gardeners were setting up sprinklers which covered all the paths as well as the lawns and gardens so there was no choice but time our runs or get wet. We ran through only getting slightly wet, but watched high school kids all screaming and laughing as they ran got it wrong and got wet. One boy tried 3 times before chickening out each time. It reminded us of being kids ourselves.

We cut through Ben Thanh markets running the gauntlet with all the stall sellers offering to sell us T-shirts, handbags and other tourist stuff before heading towards the Presidential Palace. A friendly drink vendor, balancing a tray of coconuts on one end and an eski of cool drinks on the other end of his bamboo pole, stopped us and talked me into relieving me of his burden for a while. He chatted to us for a while as we walked along, quite happy to be relieved of his burden I think, when a French couple stopped us and asked about a photo. I quickly handed over the burden and quick as a flash we were off up the road waving over our shoulders and wishing the drink seller adieu. The two frenchies were still standing with looks of bewilderment on their faces as we turned the corner.

We arrived at Notre Dame and were equally disappointed as during our last visit as the foyer of the cathedral, which is fenced off, was packed with tourists. Everyone was vying for position for the perfect picture, making the cathedral feel more of a “must do” than a spiritual place. There were signs barring people from the inner area except for prayer. We went back outside took a few photos and then crossed the road to the post office. The Saigon Post Office was designed by Gustav Eiffell. Its a large pink building with white trims resembling an old style railway station inside, with the high arched windows and vaulted roof. We posted a prezzie to Aus and we had it wrapped by a postal worker. No postal bags or boxes here.

Not far from the Post Office is the Opera House, a large white French colonial structure. Michele had seen a AO   Saigon advertised so we purchased a couple of  tickets for the 6pm show of AO. It was amazing a mixture of dance, percussion, acrobats and comedy. All using bamboo only as a prop. Some of the acts we breathtaking as the actors flew through the air landing on small bamboo baskets. Well worth the money.

After the show we headed back along the same route as last night through the park opposite Bien Thienh markets. Tonight the park was once again hosting ballroom dancers in the rotunda’s but there were also a group doing Tai Chi. At one end of the park was a large acrobatic class, doing cartwheels, one handed cartwheels, and flips, on a large concrete area some more successfully than others. I felt sorry for a few that didn’t get it right when they hit the concrete. I think the concrete must spur them to get it right.
At the end of our alleyway the market had packed up for the night and the restaurant had set up. It’s a great way of optimising space. We ordered a seafood and fried noodle dish much like Char Keay Teow. It was delicious. The restaurant has a number of she-males who are waitresses and it must be one of the few places where they can work as themselves and not be either sex workers or part of some freak-show.

Tomorrow we board the train to Hanoi.