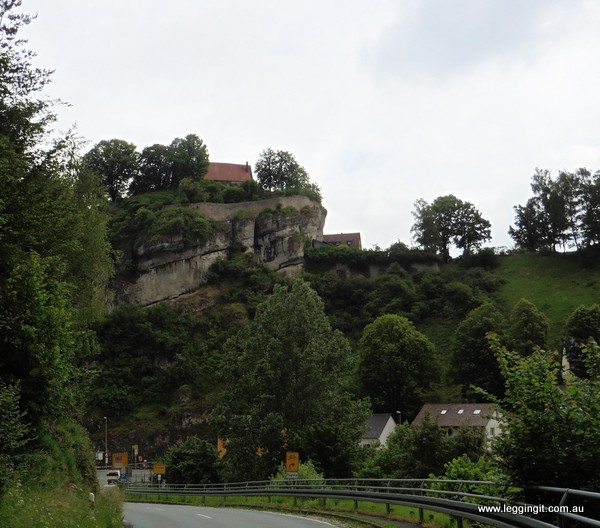 We are heading to Munich today stopping along the way to visit the Nuremberg Documentation Centre. However this morning, we sent the owners of the guesthouse into a panic. After a massive German breakfast (Früstuk) I jumped on the bike and headed into Gössweinstein to visit the bank. They must’ve thought we were doing a runner for the old lady was straight up to the room which startled Michele. She tried to explain that I’d gone to get some money but with no success so the son was called (who spoke marginally a little more English). By the time I arrived back with a full wallet and a full tank of fuel the situation was back under control so I didn’t realise the panic I’d caused.
Michele paid the much relieved owner as I packed the bike ensuring everything was encased in plastic. The weather app said no rain but the grey clouds threatened a totally different outcome.

We retraced the route we used yesterday afternoon into Nuremberg and traveled through some amazing countryside. This area of Bavaria is a series of hills and small valleys. Forests dominate the area with small fields of wheat, corn, hops and rape seed growing wherever there is space. The countryside has rocky knolls throughout and local farmers allow these areas to grow trees. The road winds through forests and fields, through tiny villages, up and down hills. It’s quite easy to see why on sunny days bikers flock to the area. 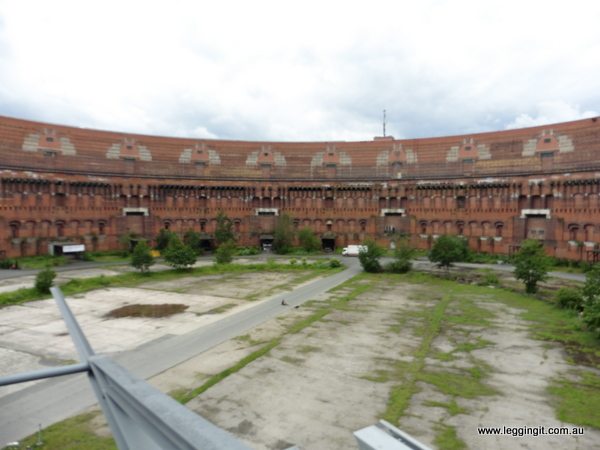 As we entered Nuremberg we headed to the Documentation Centre and Nazi Party Rally Grounds. The museum is set in a Colosseum like building built by Nazis in the 1930’s. For the sum of €5 entry and an audioguide we headed around the museum filled with photographs and Visual movie displays. The museum was actually a bit of an overload on audio visual displays. 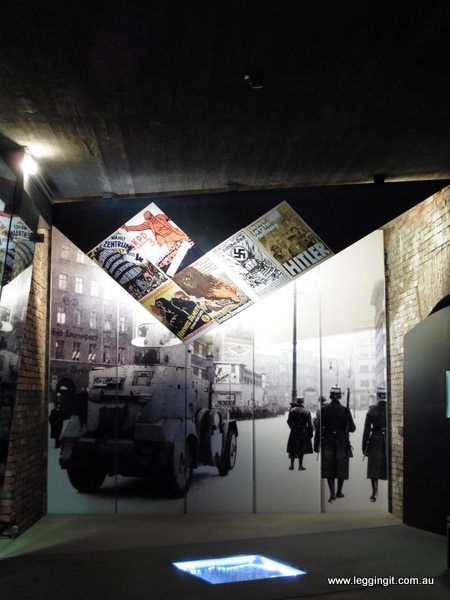 It was actually a bit disappointing, while it explained the causal factors of the rise of the Nazis we found it a bit limited. It explained the processes of the rise of the Nazis but didn’t set the scene as to what was happening both in Germany and the world at the time. After visiting the Peace Museum in Caen, France where the scene was set so those who visited understood how Hitler managed to take power so well. It really felt like those who visited here would leave and not understand much about it at all.

There were some really interesting parts like seeing video of Nazi party rallies in the parklands of the Zeppelinfeld and Documentation Centre which attracted crowds of 100,000 people. though on the whole it was really a bit of audiovisual overload and information underload. Overall the visit to the Nuremberg Documentation Centre was a bit of a disappointment.

The freeway towards Munich was pretty packed as we zipped along it passing fields of wheat, hops, and corn. The weather app was proven wrong for not far out of Nuremberg we felt the first spots of rain. We pulled into a roadside park and the heavens just opened up. It was like being in a tropical rainstorm with Huey just sending it down. It was pretty hard to ride in with visibility pretty low and lots of trucks sending up clouds of mist in their wake.
After about fifty kilometres battling wind, rain and flying debris we took a break at a servo. By this stage we were dripping wet and were receiving curious stares as we made our way to a booth. By the time we’d finished our coffees the sky had cleared to a beautiful bright sunny day. It was quite astonishing the transformation.
The last 80 km’s to Munich were a breeze and we zipped along at a fair clip arriving at our mate’s place at the time we’d expected. We caught up with Matt in Switzerland last year but he’s off following the European Cup at the moment but he kindly offered us his unit to stay at whilst he’s away. We are so blessed to have met so many amaying people through couchsurfing.
We are staying in Munich for three nights so hopefully we’ll get to explore the city, weather permitting.