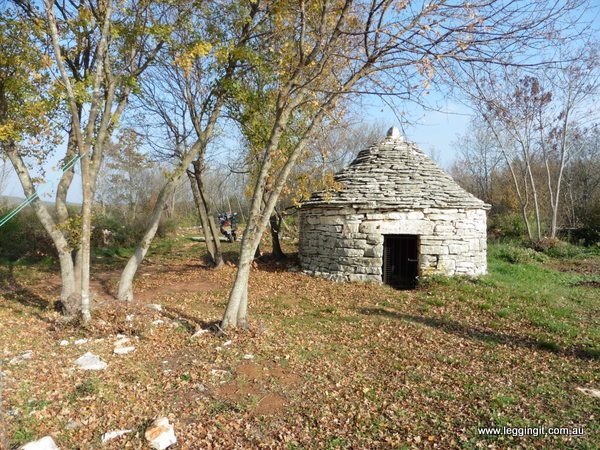 Since we’ve been in Croatia we’ve seen lots of quaint Kažun’s scattered across the countryside, amongst olive groves, vineyards and farms. Kažun is a traditional Istrian dry stone shelter built entirely from stone, usually with a corbelled conical stone roof. They were traditionally built for shelter by peasants and shepherds. Whenever the rocky land was cleared, the rocks were reused to build Kažuns. Using freely available material they are described as the original “architecture without an architect”. They are supposedly all along the Croatian coast, but along the road from the border to Pula they’re everywhere. Kažuns became popular in the 18th-19th century when there was a population increase in the area. With the increased demand for vineyards, olive groves, and sheep grazing these simple huts were installed across the region. These days they’re being preserved as a symbol of identity of the Vodnjan region and its inhabitants.

On the edge of the town of Vodnjan is the Kažun Theme park where they are keeping the tradition alive. On display are the different stages of traditional round Kažun construction. Also on display are four different styles of Kažun construction. We visited one night on the way back from a night out. The theme park is still under construction but it’s fascinating how much work they’ve done to recreate the very symbol of Istria.