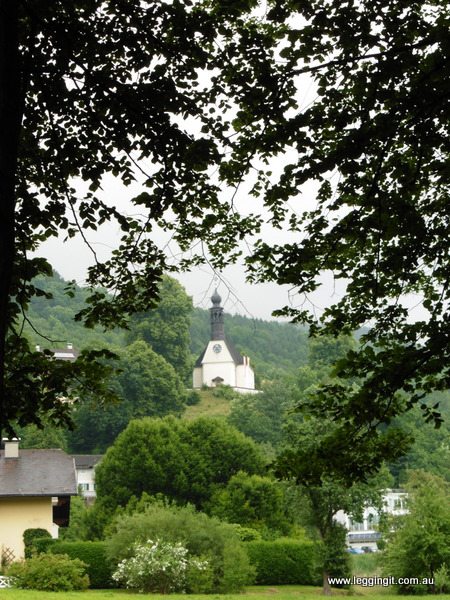 Our first job for today after walking the dogs, is to visit Mondsee and check out the computer shop. The weather is just perfect, well a little too perfect with the temperature in the high 20’s making us swelter in our bike jackets. 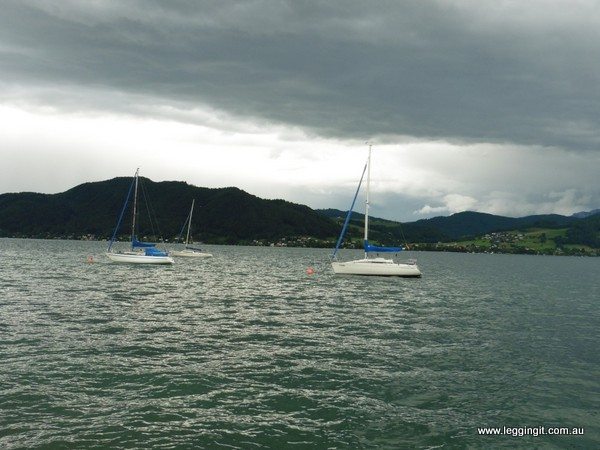 Instead of taking the freeway we took the road along Lake Attersee, stopping off along the way to take in the scenery.

So what do you do in the Area around Salzburg? The Sound of Music Tour of course. We had done a bit of research tp the filming locations so wer eon a mission to visit some of Michele’s favourites In the film you’re led to believe that everything is close together. However, this could not be further from the truth. Some of the locations are far away in Mondse
Luckily for us we were staying halfway between Mondsee and Salzburg. So with a bit of planning were able to visit all the sites at a leisurely pace.
Our trip out to Mondsee was not just for pleasure. Michele’s laptop has been playing up for a long time and Mondsee was the closest repairer. The power cord was chomped by a little dog in Brittany. It was patched up, but by the time we hit Zadar the power cord was cactus. In Zadar we’d bought a replacement power pack but by the time we’d reached Albania the laptop wouldn’t power up. After almost replacing the power pack in Albania the laptop had suddenly started working again. It really was so frustrating. Then once again in Turkey the laptop had suddenly gone on the fritz. As we were in the road the chance of getting it fixed was impossible. As we were in Attersee for a week we thought we’d have time to get it fixed. 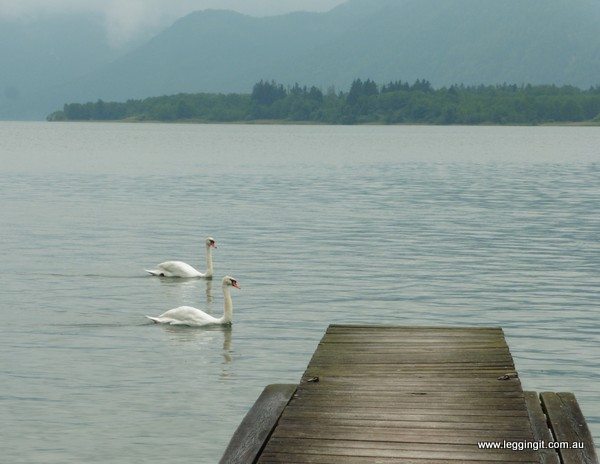 Arriving in Mondsee we firstly took a ride around town to get our bearings. Around the centre are streets lined with beautiful buildings from the 18th century. Being on a bike parking was not an issue. We parked outside one of the most famous Sound of Music locations, the Cathedral. 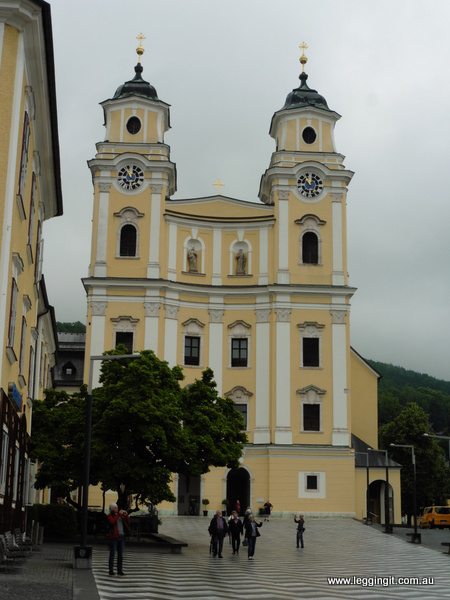 The interior of the Basilica of St Michael was the setting for the big wedding of Maria and the Captain.  Looking inside you can see why. 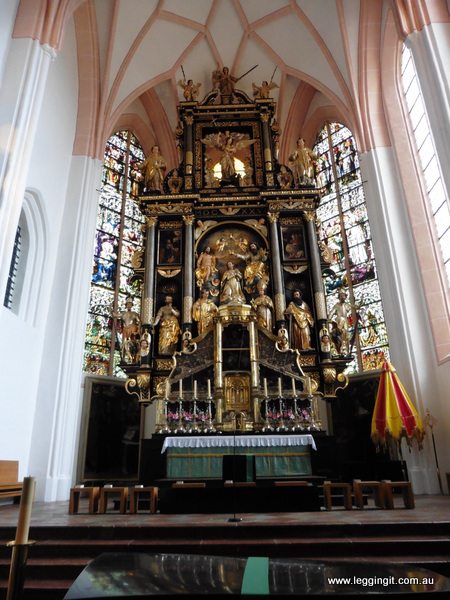 The ornate altarpiece is stunning and looked beautiful in the wedding scene.

Whilst we were there lots of tourists filed through snapping pictures. However, we’re not too sure if any of them actually looked very closely. 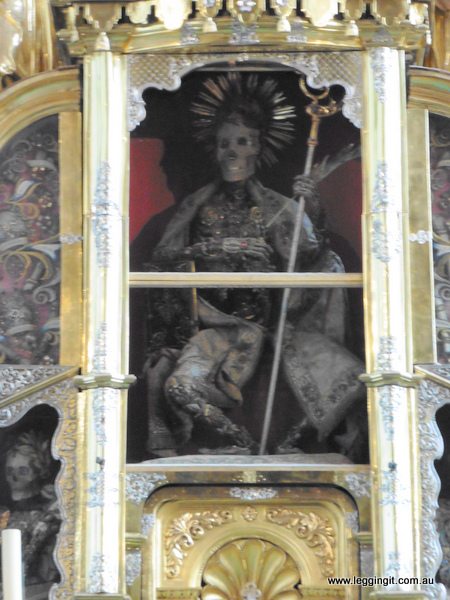 Thanks to Atlas Obscura we discovered that among the gilded altarpiece there lay a hidden treasure. Sitting in the centre, behind the glass is the  jewel encrusted skeleton of  Abbot Konrad II along with four others.

If only the people knew what they were photographing. Maybe they’d take a little longer. Could you imagine if they zoomed in on their selfies to see the ghoulish smile of a skeleton in the background.

The whole selfie thing really struck us at the Cathedral. One lady primped and posed for every shot. It had us thinking why would you want 30 odd photo’s of the inside of a church with your own head blocking every photo. Is it narcissism where every photo is shared on facebook or maybe proof of life. I think we’ll save the selfies for posing with friends. 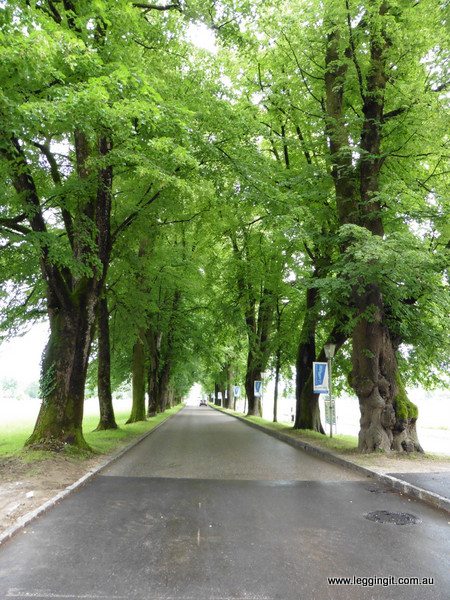 Not far from the the Basilica is an avenue of trees which were another film location. In the film the trees are not far from the house. It’s where the Von Trapp children are playing in. Michele wanted me to climb a tree for a photo but I was having none of that. 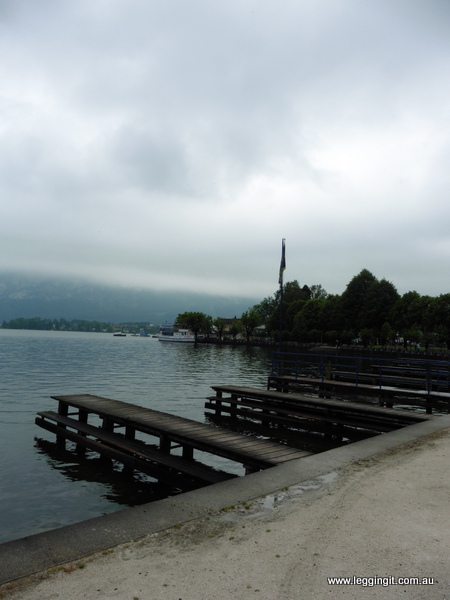 Actually Mondsee is a beautiful spot set on the lake’s edge. It has the most stunning views across the lake to the snow capped mountains in the distance. Mondsee has been inhabited for a very long time. Down near the lake’s edge is a small display of some of the archaeological research conducted in the area. Originally there were wooden huts close to the lake built on pylons. Some were also in the lake and would’ve used the lake as a food source and defence. It was fascinating reading about their discoveries in the lake. Who’d have thought to look for post holes in the lake.
As it was such a beautiful day we decided to circumnavigate Lake Mondsee and Lake Attersee. A road runs around both lakes offering great views. There’s even a few nice spots near the water to stop off for a meal. The weather in Austria is glorious at the moment and it seems everyone is out enjoying the hot weather. Around the lake at bathing spots everyone is swimming and sun-baking. Well actually not everyone. The local farmers are making the most of the current spell of hot weather to cut their hay. They are literally making hay while the sun shines. After a lovely day cruising around the lakes we headed for our current home.

Tonight we had the most amazing views across the Lake as a full moon lit up the sky. 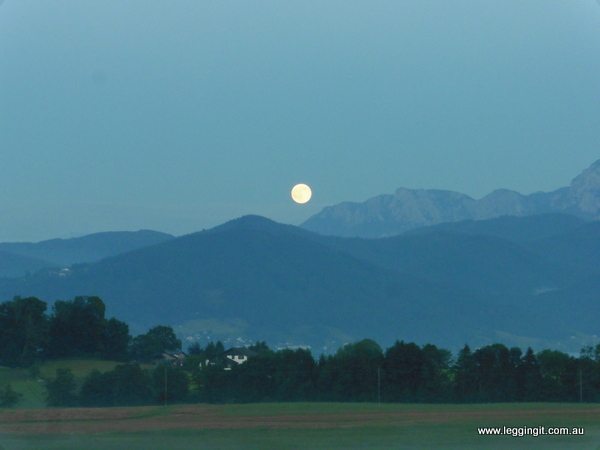 Tomorrow we’re heading into Salzburg to try and finish our Self Guided Sound of Music Tour. It should be fun.