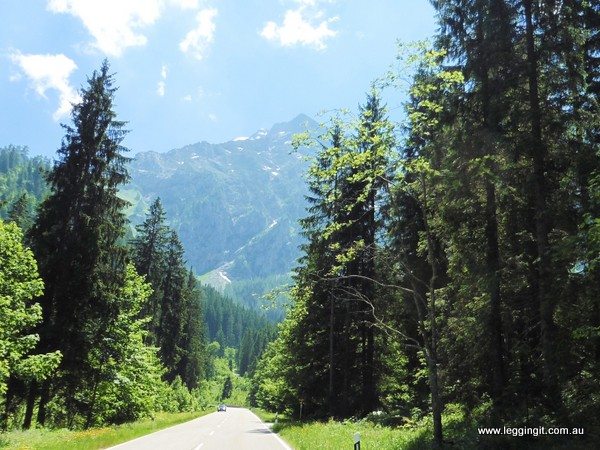 After walking the three dogs this morning we headed out to Berchtesgaden. Heading out of Attersee we picked up the autobahn and headed towards Salzburg. Before we reached Salzburg we turned off onto a smaller road which took us through Unterberg along the Almbach river past Lake Wiestalstausee. It was nice riding along the river through the small towns. The ride took us through long valleys of lush meadows surrounded by tree lined hills overlooked by high craggy mountains. Healthy Brown Alpine cattle with bells around their necks grazed in the lush meadows. It was real “Heidi” country. 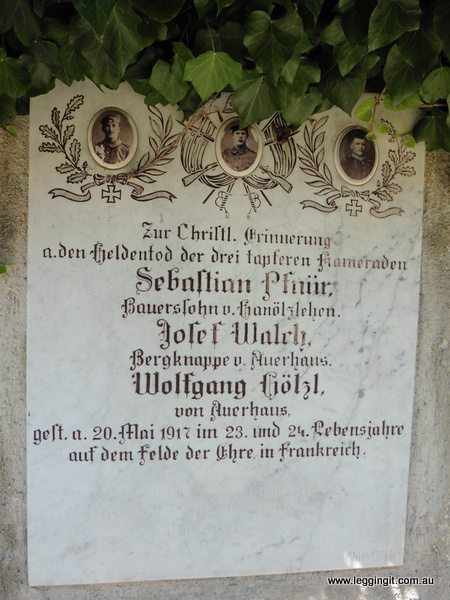 Stopping off at Berchtesgaden we visited the Franziskaner Church Cemetery where the soldiers of both world wars are remembered on the wall. Small stone plaques, some with photos adorn the walls surrounding the cemetery.Left by mourning families in remembrance of the sacrifice made by their loved one. Many have no more information than the soldier’s name and that they died in the East….

One of the things that has puzzled us in our travels, is the lack of recognition for soldiers who have ended up on the losing sides of war. Throughout the France and Belgium the cemeteries and ossuaries are almost an unfortunate reminder of a different time. It’s not just Germany but other countries too. Young men who were sent to fight for their country, because their politicians chose a military rather than a political solution. Maybe because they were on the losing side of a war their country doesn’t respect the sacrifice they made.

We’ve heard talk that there have been moves to remove the cemeteries in foreign countries and it almost sounds like a sanitisation of history. Not only were these soldiers seen as a shame on the country now they want to remove their memory completely. It must be hard for the parents and families of soldiers who were on the losing side to have nowhere to mourn for their loss.

At Berchtesgaden it’s just a row of different sized plaques. It’s a simple but a fitting place to remember those who gave their all. 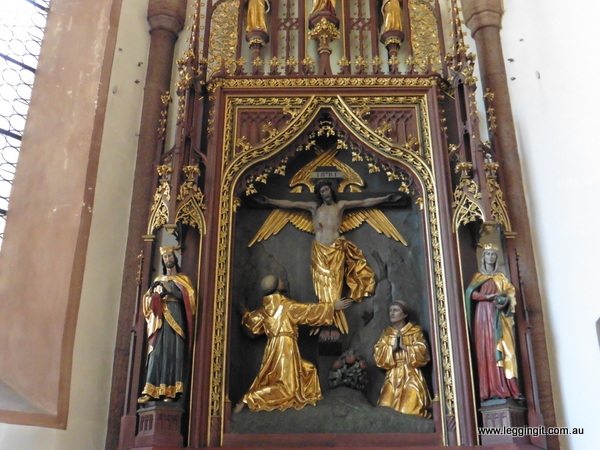 As we were there we popped into the Franziskaner Church,  dating  back to 1488 it was built originally for the Augustine Nuns then transferred across to the Franciscan Church and monastery in 1695.  It is a simple church but has some beautifully ornate alters. 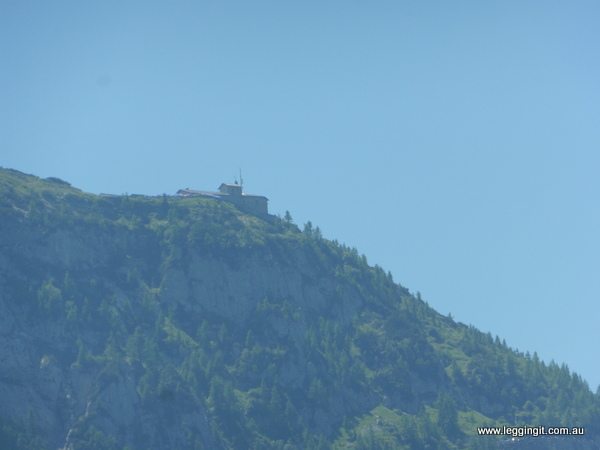 Berchtesgaden is a hub for visitors to visit The Eagles Nest, Adolf Hitlers former mountain getaway at nearby Obersalzburg. Adolf Hitler bought his mountain retreat not long after the first world war. During the rise of the Nazi party Berchtesgaden became popular with the upper echelon of the party who aquired properties around the Eagles Nest. Suddenly the sleepy little town had a boom with a railway line installed to cater for the new residents.

These days it’s a fairly popular place to visit because of its history but it also is set amongst some spectacular mountains with great views. Mountaineers visit the area to climb the local mountains. Watzmann the third highest in Germany as well as Kehlstein and Lake Königsee are all popular spots within Berchtesgaden National Park. 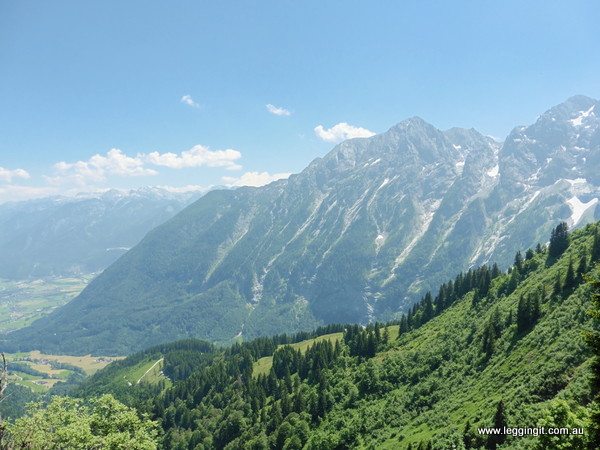 When we arrived at the parking area for the Eagles Nest to take the bus it was chocca block with cars and visitors so we decided to skip it and instead headed up into the Berchtesgaden National Park through the Rossfeld Mountains which overlook the valleys surrounding it. There’s an alpine road (Rossfeldstrasse) which takes in the most beautiful views of the craggy mountains. 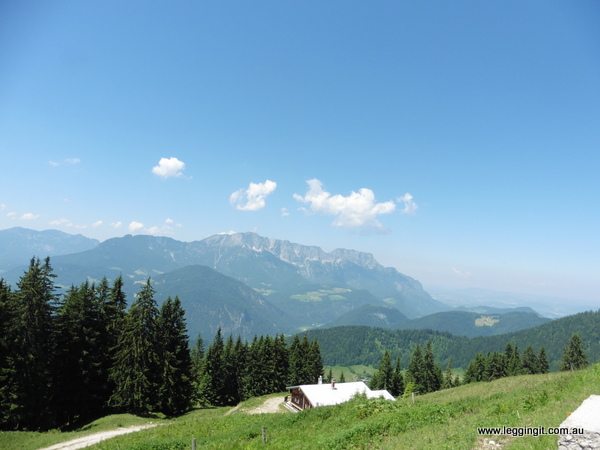 The road took us up extremely steep grades through pine forests as it wound its way to the top. In the film “The Sound of Music” it was here they filmed the escape over the mountains, with the Eagles Nest in the background. After taking in the views in all directions from the top of the ridge we slowly started our way back down the mountain. It was slow going due to the steep grades and low gear. Unbelievably there were cyclists slowly climbing up the hill. Their brakes must have a real workout on the way down as they reach breakneck speeds. 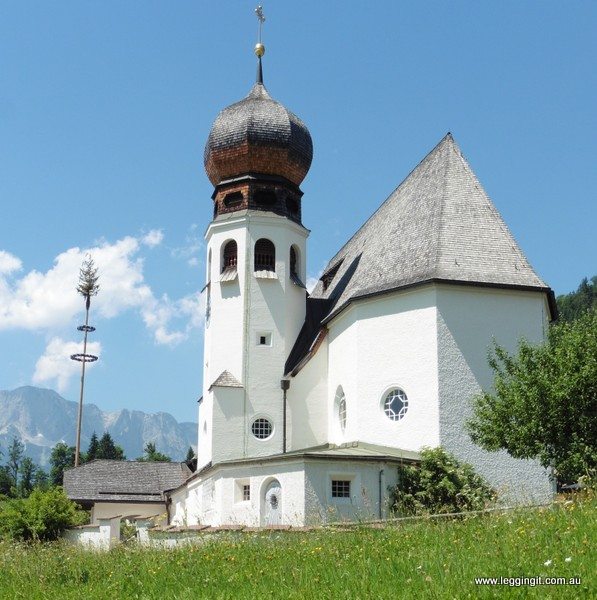 The weather was just perfect for a ride through the forests and mountains surrounding Berchtesgaden. On the way back to Attersee we followed the watercourse once again down past Lake Wiestalstausee towards Monsee. Along the road we stopped off at a small mill village on the river for lunch. The old stone houses of the tiny village were really quaint. Then it was past the two lakes of Mondsee and Attersee before arriving back in Stöttham.

Late in the afternoon we got a visitor. Our Facebook friend Winston was passing and dropped in to say hi. He’s been on a three month tour of Europe on a Honda Pan European. We’ve been following his journey online and he’s certainly having a great time. Winston is a tap-dancer who’s even been on Aussie tv and along with touring he is also taking time out to teach tap-dancing lessons. It was a real breath of fresh air to hear about his travels and his experiences teaching tap. We decided to have a barbecue and had a nice night catching up.