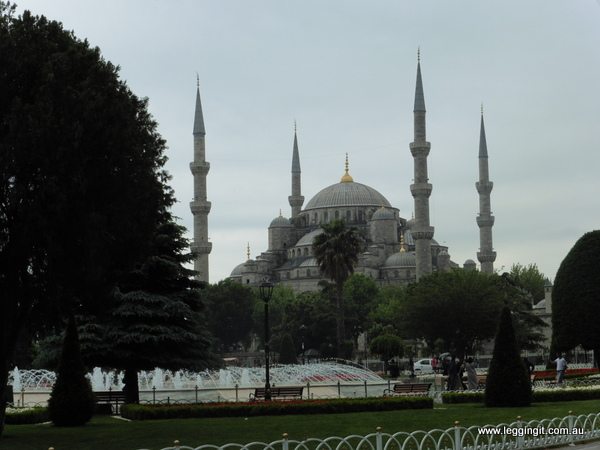 It was an early start this morning as our couch surfing hosts were leaving at 6 am to visit family in the middle of Turkey. We also were heading to Plovdiv in Bulgaria but as it turned out there was no chance of sleeping in for me as right on 4.30 am the call to prayer started. It was the most awful racket. Around the area there’s 40 or so mosques with big speakers on top of their minarets and the volume cranked to maximum. With 40 calls to prayer all going off at different times, combined with the feedback and distortion coming through the speakers it was like being in a Chinese Parliament. No melody, no soothing prayer just white noise. After breakfast we packed the bike and said goodbye. I’d been asking Afghan about the Turkish males touching temples together as a form of greeting. Supposedly it’s a recent phenomenon, sort of like rams butting heads. As we were saying goodbye Afghan extended his hand, put his head forward and we butted heads.lol. 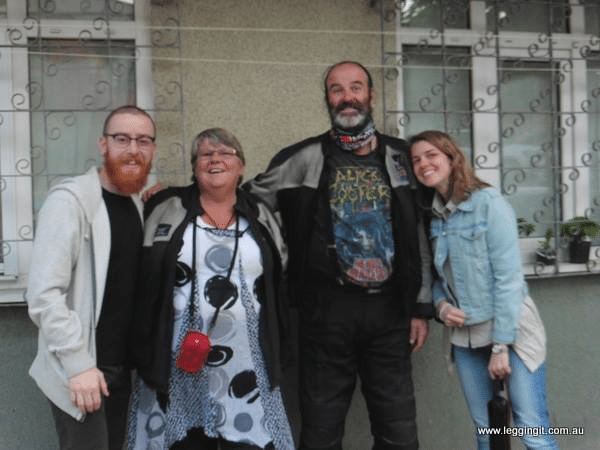 It’s been interesting watching young blokes in Turkey. Some of their traditions like the butting heads are quite unusual. I love the way they hot up the little Tofaş (Turkish Fiats). They tweak the engine, put some blue led lights underneath them, lower them and put on a nice set of rims. Then they do bog laps of the town centre checking out girls. It reminds me of growing up in the country.

There are heaps of things I’ll miss when we leave Turkey. I’ll certainly miss seeing farmers driving their bright orange Turkfiat Tractors with their wife riding beside them, or cruising along with their walking tractors hooked up to a trailer doing about 10 km’s an hour.

I’ll certainly miss seeing Renault 12’s loaded up with all sorts of stuff. These cars certainly are the workhorse of Turkey. I’ll miss young blokes on Mondials, Kuba’s and Kunani’s trying to race us at the lights. All shiny with lots of chrome on those little bikes with a 125 or 150 cc engine they were “lots of bling with a little zing”.

I’ll really miss those great old IZH Cossacks and Jawa bikes that are still plodding along on country roads. True love is that crackly sound of a Jawa.

Michele will say that she’ll miss the food. Turkey has a great variety around its many regions and has great fresh foods. Turkish breakfasts are just awesome. Most of all we’ll miss the Turkish hospitality we’ve been shown throughout the country, from people leaning out of cars to wish us welcome to people paying for our tea. It really has been wonderful.
After saying our goodbyes we climbed aboard the Princess. I hit the ignition but as the bike had been sitting for three days it took a while to prime and suddenly the battery was flat. Ghan came to our rescue and pushed us enough to reach the downward slope. After gaining a little momentum I dropped the clutch but it didn’t fire. Luckily the hill was quite steep so I let the bike roll some more and repeated the process. Suddenly it fired into life and we were on our way up through the hills towards the freeway. Leaving early worked out quite well for us as we missed the traffic as we headed back across the bridge through Istanbul. For a change we got on the pay road and after clearing the city sat on about 130 kph towards the border. As we had just over 400 km’s to travel it worked out pretty well as the bike soon ate up the kilometres and we could stop more frequently. The landscape outside the city was rich rolling hills covered in wheat fields as far as the eye could see with only the occasional patch of urban development. after three days in the city it was wonderful to see open spaces again. After a brief stop at 100 km’s at a roadside park we headed on.

When we reached Edirne we took a detour to ride around the city. Riding down into Edirne the first thing that we noticed was the two massive mosques. The other thing we noticed was lots of old wooden houses around the centre of the city. Close to the central mosque we spotted a park with a restaurant overlooking the main square where preparations were being made for the National Day. We’d heard that all celebrations had been cancelled due to the terrorist threat but it seems that someone forgot to tell the locals. Flags were flying, children were dressed in red Turkish T-shirts, bands were playing and people were singing. In the spirit of togetherness we celebrated with a Turkish Breakfast and çay. It was a great final meal in Turkey.

After a brief fuel stop to use up the last remaining Turkish lira we crossed the border near Kapikule. Trucks were lined up for about five kilometres before the border. Cars were lined up thirty deep extending from the gates on the Turkish side and it was a slow progression. After about thirty minutes we passed through only to be subjected to a disinfectant bath, riding through a pit with sprays. The attendant laughed as I pretended to be spitting it back out.
Reaching the Bulgarian border once again we faced four long lines of traffic which was just stationary. After about five minutes of waiting a Turkish bloke came up and started talking. He told me just to head to the front of the queue and wait, which I did. After two cars went through as there was no sign of special treatment, I just pushed in and a few stamps on the passport later we were into Bulgaria.

The road from the border cuts straight through the country with lots of towns off it. All along the centre strip between the two roads was just filled with rubbish. We haven’t seen anything like it in all our travels, it’s quite a disgrace. Close to the border at roadside truck parks prostitutes with downcast eyes waited for a chance to be free of the filth in the back of a truck or the backseat of a car. We wondered if the whole of Bulgaria was going to be like this.
The filth close to the border was a real contrast to the countryside surrounding the highways further along. Low rolling hills covered in wheat fields as far as the eye could see, tree lined rivers and wildflowers growing in abundance. Around Svilengrad we had another brief stop and as we had a drink we watched in wonder at Bulgarians eating on the ground surrounded by rubbish. We just don’t get how people don’t bin their rubbish.

Eventually we made into Plovdiv where following the road towards the accommodation past ruins of a Roman Aquaduct. After arriving we were shown to our room and welcomed with homemade Rakiya, with a special aphrodisiac herb. (Which doesn’t seemed to have worked).

We talked to the owner about life in Bulgaria and learnt how the basic wage is $20 a day. He talked of life under communism, the price of food, and the lack of privacy. 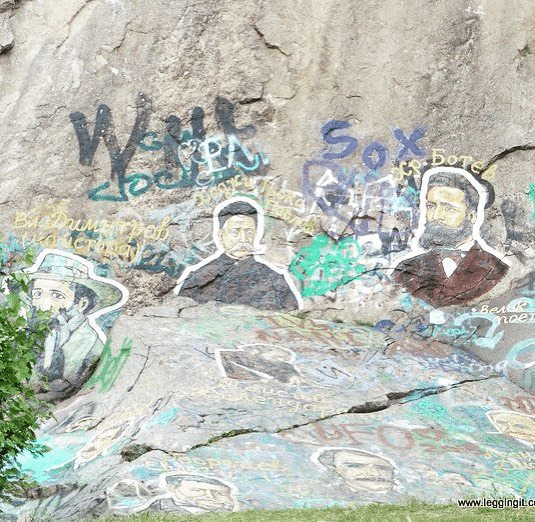 Late in the afternoon we took a ride into the city to get our bearings before eventually finding the old town. Plovdiv is an old roman settlement and the main shopping mall lies on top of the old roman theatre which runs beneath the city street. As we headed towards Simeon Park we spotted some graffiti art on the side of Danov Hill. All sorts of characters faces with their names were painted on the rocks. 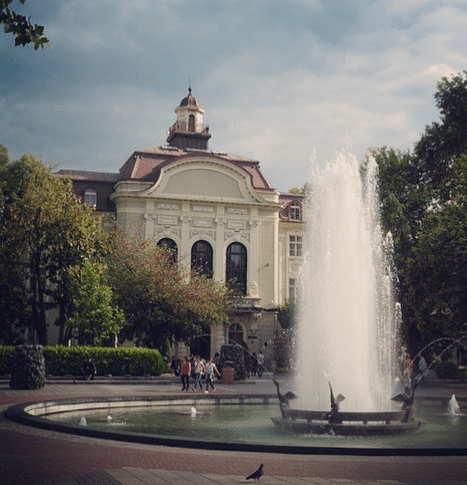 As the day was nice and sunny walking through Tsar Simeons park was perfect. There are lots of trees in the inner city park, along with kids playgrounds, water fountain (which at night is a light and sound show) and a kids water feature to play in. The park is a haven for different buskers and we caught a performance by a puppeteer who was entertaining not just kids but also adults. After dinner in the old town we headed back to the accommodation. Tomorrow we’ll explore Plovdiv a little better.