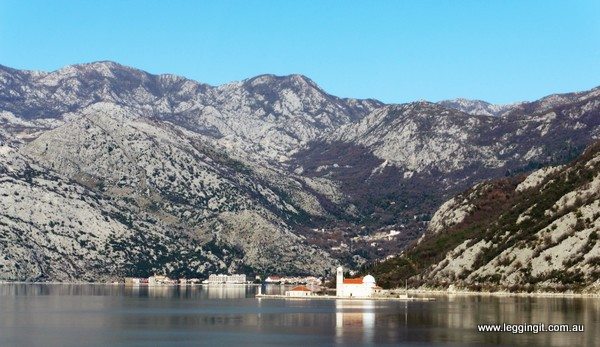 The forecasted bad weather didn’t appear today and instead we were greeted by nice clear sunny day with a temperature of 2 degrees. Perfect weather for the run from Dubrovnik to Bar in Montenegro. After packing the bike we decided to head south and stop for breakfast along the road. Due to the crisp clear air, the views down over Dubrovnik and the islands were just sensational.
The countryside south of Dubrovnik is quite interesting as it’s quite a large wine growing area, so in the valleys there were lots of vineyards. 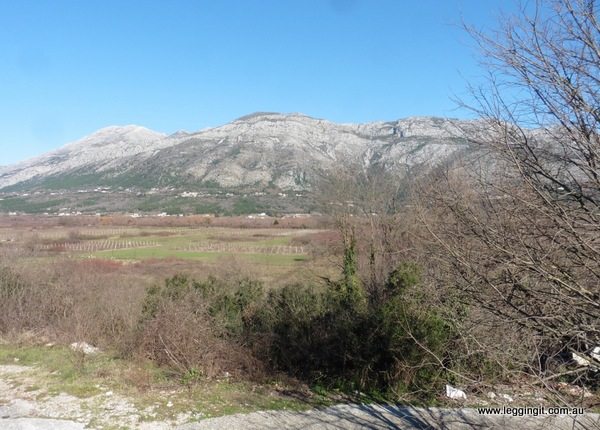 Taking a chance we took a detour through Gruda and were lucky to find a pizzeria open. Kavana bistro Belmondo was a great find, we enjoyed one of the best omelettes with freshly cooked pizza bread and coffee. We haven’t had omelettes for so long and this one was so tasty. 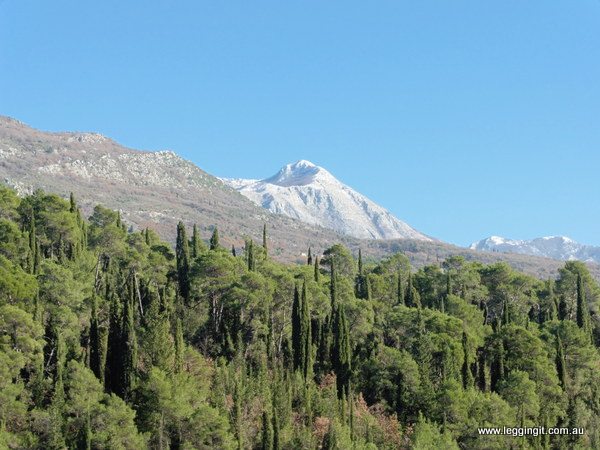 Back on the road we were soon at the border where after a quick stamp we passed into no mans land. It’s interesting that along the sides of the hills are hundreds of pencil pines, we’ve never seen them growing in a natural environment.

Arriving at the Montenegrin border we were stopped and asked for bike rego and insurance green card. Of course we’d forgotten all about it, but the border guard pointed us towards the insurance office with an ATM right next to it. It’s a great little business for them. We purchased the 15 day insurance which cost €10 and after showing the border guard the paperwork, retrieved our passports. 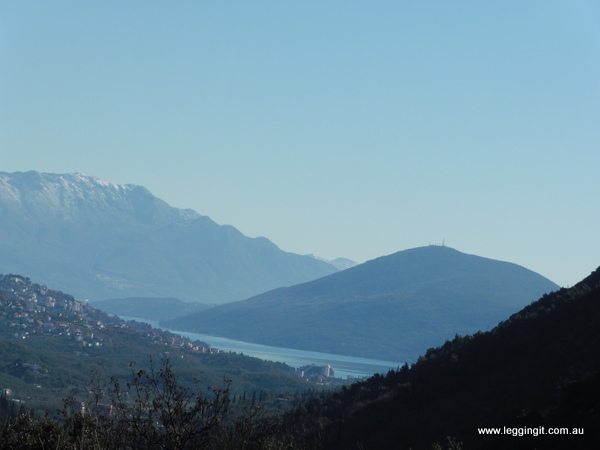 The view from the border is quite stunning. Steep hills and snow capped mountains surround the beautiful blue waters of the bay of Kotor. We headed down to Herceg-Novi where we took a detour down to the edge of the bay for a coffee. What a great view. Crystal clear waters, snow capped mountains bathed in glorious winter sun. An old lady at a table nearby had even gone to sleep in the sun so her husband left her there.
The waiter understandably wasn’t happy when I went to pay the bill of €2.10 with a €100 note. Luckily we came to an agreement, as I had some Croatian kuna left, so gave him 20 kuna instead. 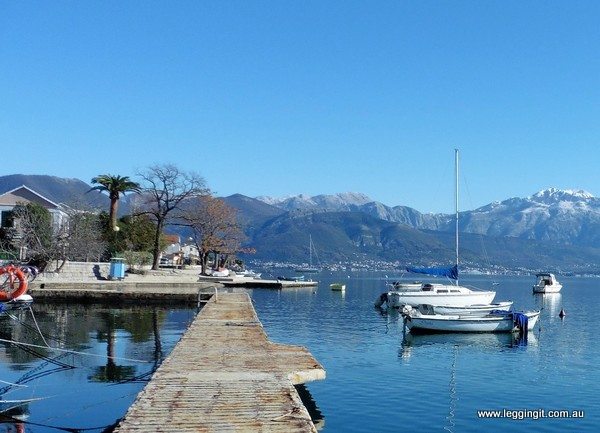 We rode around the edge of the bay for a while before heading on towards Bijela. One thing we noticed since crossing the border was the amount of Police, there were radar traps and vehicle stops every few kilometres. It’s a place where you have to keep your wits about you with crazy drivers, rough roads, rocks and blocks of ice of the road. Montenegro looks a little poorer than Croatia, with a little more rubbish in the streets and along the road we noticed a few hitchhikers. 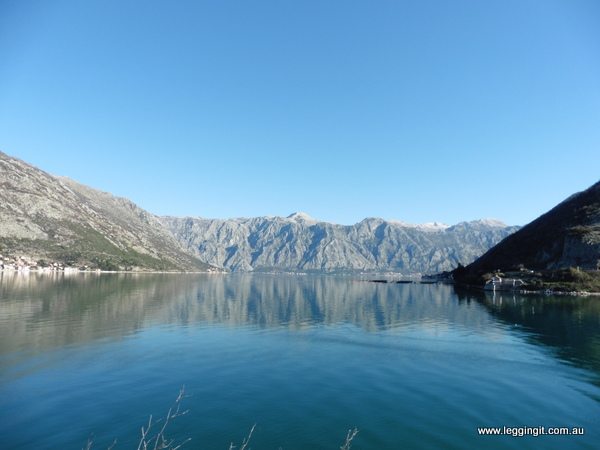 As it was such a nice day we decided not to take the ferry to Tivat but ride around the bay. It’s quite an odd shaped bay with a channel connecting another T shaped series of bays. Two small islands in the bay have an Orthodox Church and a Catholic Church on the other. The ride took us through Risan and it’s quite odd seeing brand new apartments amongst the older style housing. It reflects how many of the towns are now chasing the tourist dollar. Around Perast the views of the monastery and across to the island churches were quite stunning, so we stopped off for Michele to explore an abandoned building and take a few photos.
As we travelled south the satnav was taking us on little detours down through little villages as it had decided the shortest route.

Soon we were arriving in Kotor, a fairly modern city with a big old fort and an old series of fortifications stretching up into the hills. It really looks like a place we’ll have to explore further with an amazing contrast of old and new.
We took the road to Budvar and after passing through a tunnel were soon heading back along the coast. The trip down to Budvar was quite nice with lots of coastal views but quite different colours from Croatia. 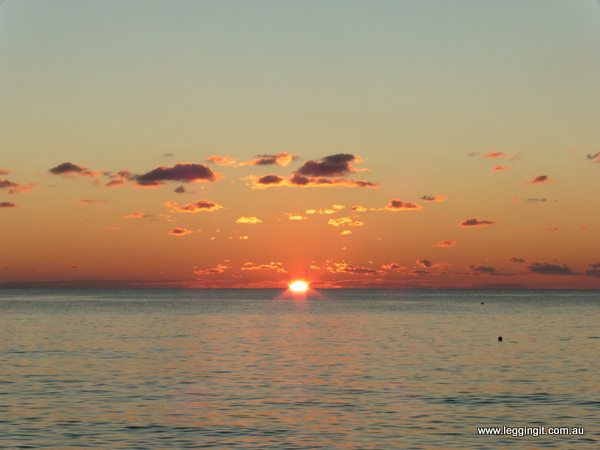 Eventually we made it to Bar and were booking into a great one bedroom self-contained apartment with sea views. After visiting the local supermarket to stock the fridge, we headed down to the beach for the sunset. The beach area was really quiet with all the seaside restaurants closed. A dog befriended us and try as we might it just kept on walking beside us even across a few roads. Eventually we gave it the slip by going into a restaurant. Pod Lozom was a nice restaurant indeed and as it was full of locals obviously popular as well. Michele ordered grilled Chicken with Gorgonzola sauce and I a local specialty of cheese wrapped in veal, covered in a bread crumb case and deep fried. It looked like a giant chicko roll and when I cut into it all the oil from the cheese ran out of it. Cholesterol city, oh well 🙂
After devouring my meal I helped Michele with hers and afterwards they could’ve rolled me home, as I was so stuffed. Tomorrow we’ll have a look around Bar and maybe check out the old fortified city of Stari Bar.

2 thoughts on “Dubrovnik to Bar, Montenegro.”