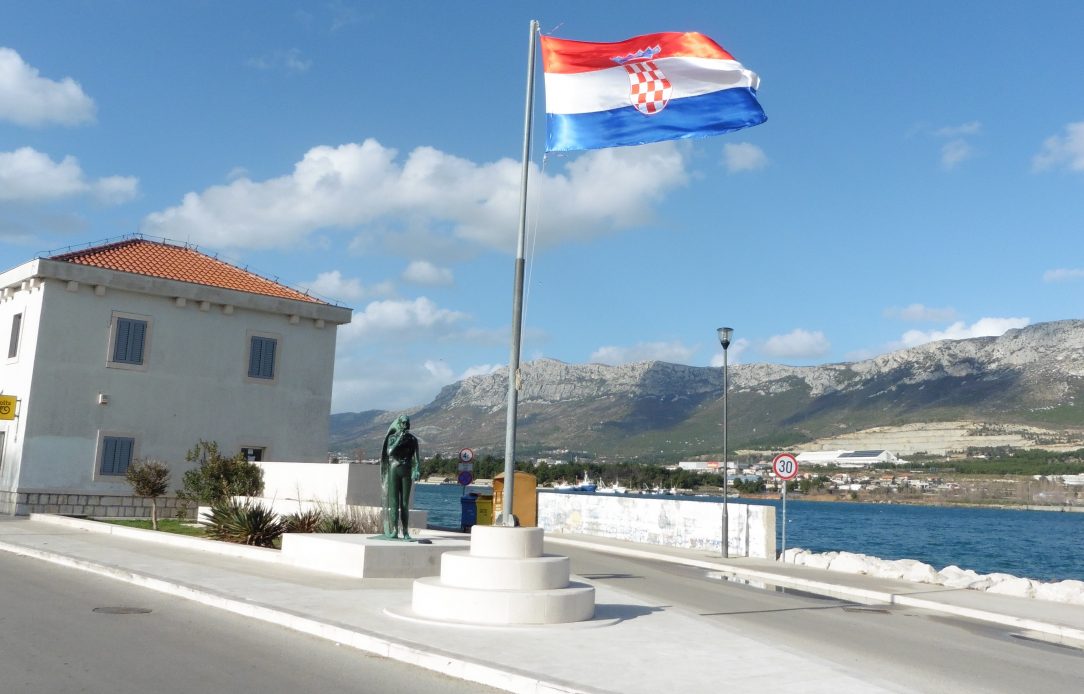 Today we took a look around Vranjic which has been described as the Venice of Split. Vranjic is situated on the edge of Split almost in Solin, in a small industrial bay surrounded by ports on the city side and the huge cement works on the Solin side. 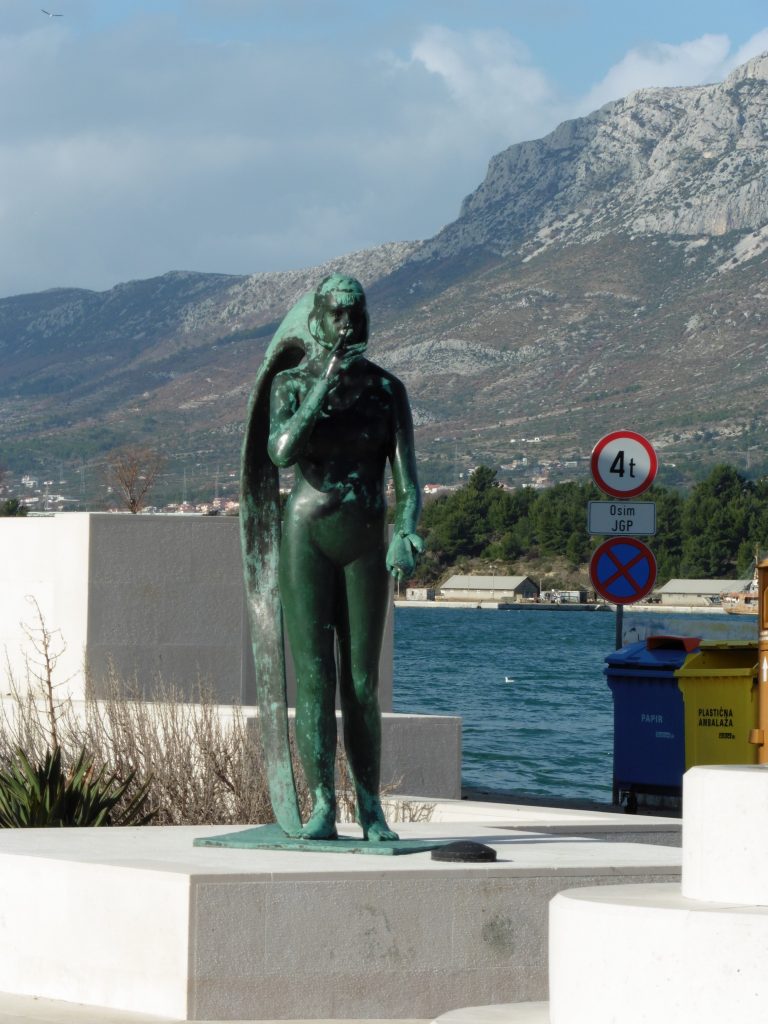 A small causeway connects the small island and riding into town the first thing we noticed was the statue of the Angel Raphael which guards the entrance to the town. We parked up and after a coffee at a local coffee shop took a walk around the town. Our first stop was the Church of St Martin. On a story board at the rear of the church a map shows the footprint of St Martin of Tours. St Martin was an unwilling conscript into the Roman Army, some say a contentious objector. One of his famous tales was tearing his cape in two pieces and giving half to a homeless man. the different pilgrimage routes of St Martin from countries all over Europe. 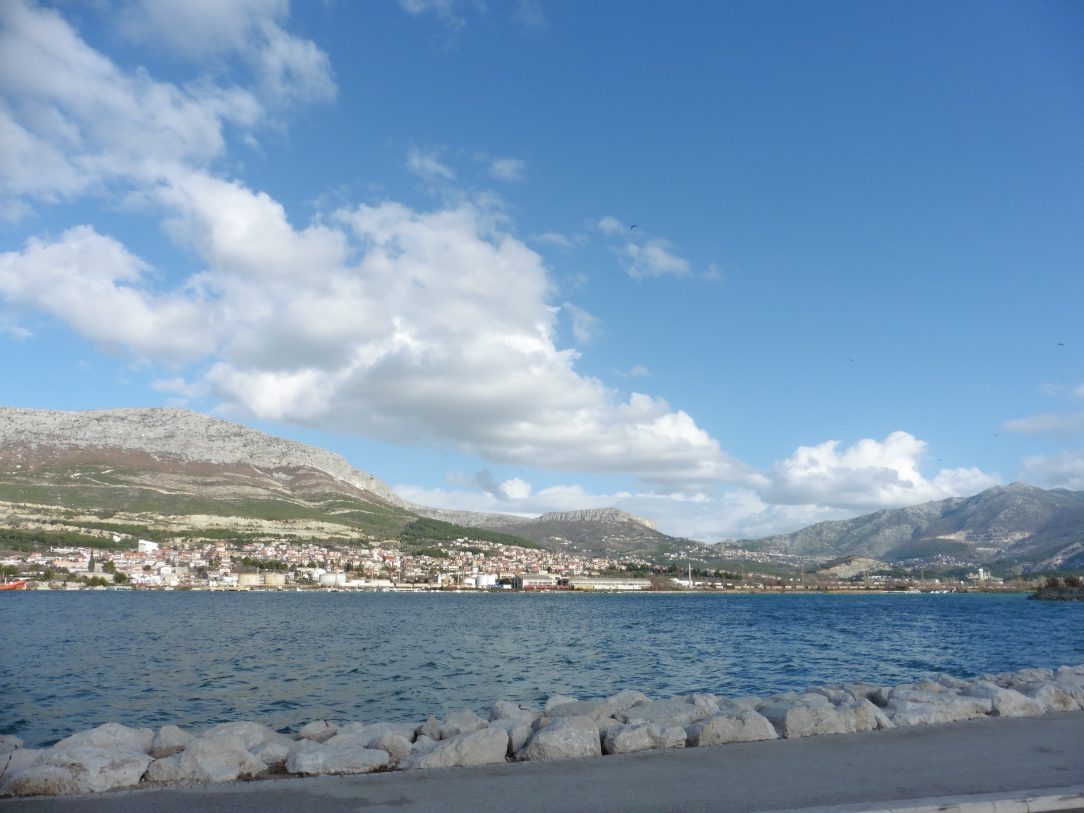 The town is pretty small and as there’s a high tide combined with quite strong winds all the boats were furiously bobbing up and down and waves were crashing against the pier before spraying across the wharves. In Roman times supposedly it was a holiday spot for rich Romans living in Solona who’d from escape the city to their villa on the island. They’d just about cry if they saw the area now, surrounded by industry.

Despite this it’s still a nice spot to get away from the city on a sunny day,  it has a few little coffee shops and there’s no chance of being overrun by tourists.

As Vranjic is so small it didn’t take too long to look around so we decided to head back along the bay towards Trogir through all the fort towns, like Kaštel Sucurac, Kaštel Kambelovac etc. Even though we’ve been out this way before, 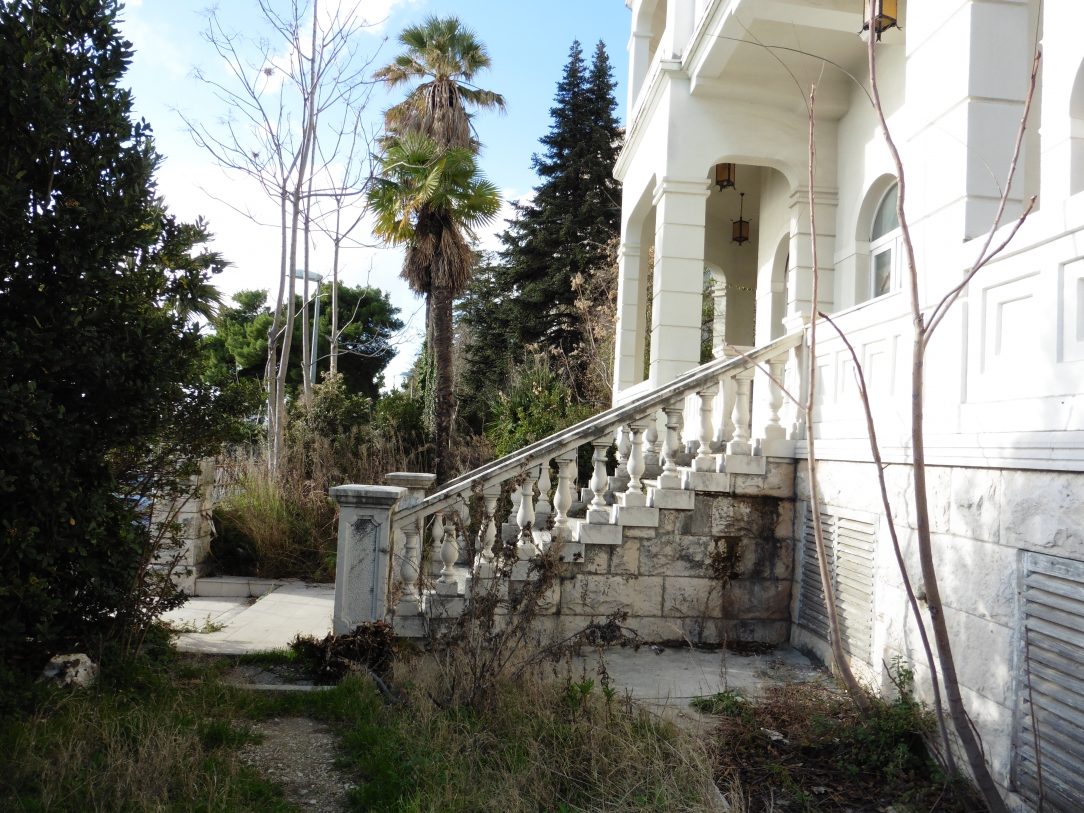 Michele was interested in visiting an abandoned hotel we’d passed a few days ago. The Hotel Palace is a grand three storey building overlooking the bay and dwarfs most of the buildings in the area. It’s amazing that a hotel of this size would be shutdown and then left abandoned. Judging by the interior it seems to have been abandoned for a few years and the local kids have desperately been trying to burn it down however there’s not much burnable items left.
It sort of reminds us of visiting the Ghost Hotel (Bokor Palace Hotel) near Kep in Cambodia.

The road system along the bay is just so frustrating with a system of one way streets, and dead ends. It’s a system that’s designed for local traffic only, and to keep all other through traffic up on the main road. However, the bonus is there are some great spots overlooking the bay surrounded by fabulous medieval buildings.

Eventually we made it to Trogir where we found a nice restaurant and enjoyed a few pizzas. It’s hard to put a finger on what food Croatians cook the best, seafood, pasta, meat or even desserts. It’s all so good. 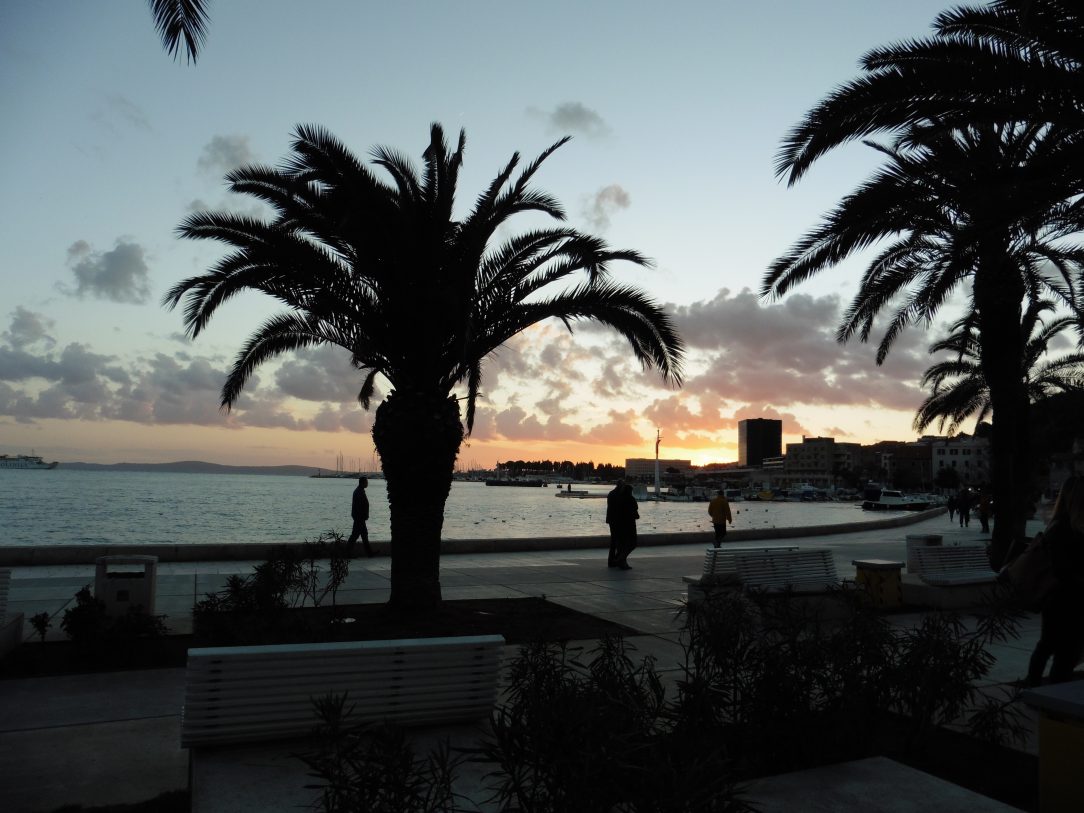 After lunch it was a straight run back to the city and down to the Riva where we found a nice cafe overlooking the harbour to watch the sunset. It’s quite amazing how the Riva has changed since the advent stalls have all been removed. The crowds are gone and a bit of the buzz has died as well. However, it’s still the perfect place to chill out. Split is the perfect place just to be.