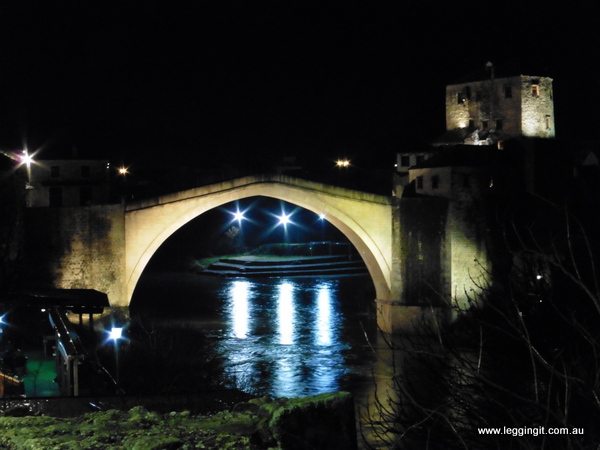 Today we’re saying goodbye to Croatia as we head from Split to Mostar, in Bosnia and Herzegovina.
It was raining when we woke up this morning was an understatement. It was a real effort  to get out of a nice warm bed but eventually after Michele threatening to make coffee herself I made it out into the kitchen. I’ve got the whole Croatian stovetop coffee technique happening so I don’t want her messing with it. Bring the water to the boil. Take it off the stove and add coffee. Put it back on the stove and bring it back to the boil trying not to rapid boil and overflow it. You can find blow by blow instructions on our friend Sarah-Jane’s blog post at Chasing the Donkey.
Packing the bike in the rain was no fun at all but according to the weather forecast there would be no let up all day. After I’d packed the bike we received a call from the apartment owner asking whether we’d like to stay another night free of charge. It was a really nice offer and we were tempted to wait until the weather got better but we know we have to start heading towards Turkey or we won’t make our housesit.
Last night we had looked at the forecast before plotting our course for today but had hoped like many times before that it was wrong but sadly not. Head straight out of Split on the pay road towards Mostar. The decision to turn right at the end of the street instead of left was a bad one for every street we passed was no left turn. Instead of heading inland towards Sinj we headed south towards Markarska skirting around the old city.
Along the coastal road was probably the better route as the storm clouds were low over the coastal mountains meaning that inland would be getting dumped on. It was a little gusty but the views of the beaches was just magnificent. The rain had changed the colour of the beaches to a golden hue and the storm had whipped the seas up to a frenzy of crashing emerald green and white.
We headed along the coast past Omiš to Dubci Pass, where I gave Michele the choice Makarska or Imotski. It was only twenty more kilometres to Makarska but fifty seven to Imotski. We were wet and a little cold so Makarska would’ve been nice and I was still not sure what border crossing we could use. As we’d been stopped at the local border crossing not far from Metković and refused entry. We were still unsure what the set up at each border crossing was. After checking the net we’d discovered Metković and one on the tollroad south of Imotski near Bijača both had frontier insurance offices. Also Michele had been talking about the red and green lakes at Imotski, which I assumed she wanted to see. Little did I know that the weather had dampened her enthusiasm for traipsing around in the rain looking at even more water. So with a plan in my head to go to Imotski, have lunch, check the lakes out, before swinging south back to the tollroad and crossing the border, I turned left.
The ride over Dubci Pass wasn’t as much fun as our last visit on a lovely sunny day and as soon as we reached the head of the pass we we engulfed in low cloud. Heading inland around the mountain roads of Biokovo National Park, we caught glimpses of houses and small villages perched on ridges across the gorges which separated us. The whole area is just littered in rocks, and covered in scrubby trees. The villagers in the area are hardy people who pick up the rocks and clear the rocky land to scratch out an existence. A real highlight of the area is the village of Gornja Brela. It won’t be in any tourist destinations but riding through the village with all the white blossoms of almonds trees and the pink blossoms of the other fruit trees was truly magical. There was no chance of stopping for photos for by this stage we were wet through as even wet weather gear eventually gets wet. So we just enjoyed the moment and I knocked the bike back a gear and slowly made our way through the village.

When we reached Cista Prova we turned right and I was briefly elated until I saw the sign telling us we still had a long way to go. Eventually we made it to Imotski where we followed the sign pointing to the centre. Outside the first cafe we parked up and sat drinking coffee whilst eating burek. Meanwhile we just dripped water all over the floor from our sodden gear. The burek stuffed with meat was perfect and reminded us of an Aussie meat pie, the perfect food on a wet day. 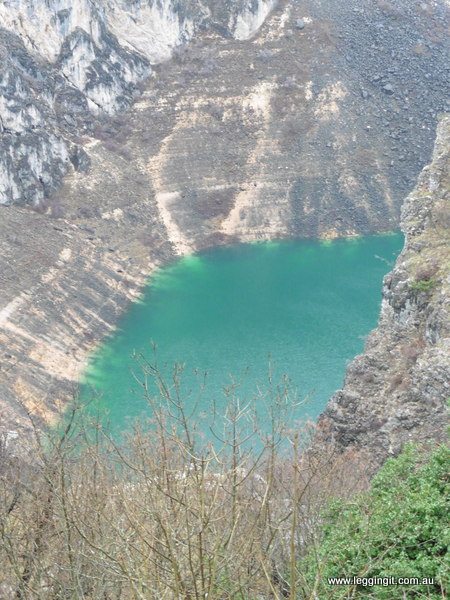 After warming up a bit and lunch we took a trip down to the lakes which are quite close to town. Well Modro Jezero (Blue Lake) and Crveno Jezero (Red Lake) really are quite beautiful. A pair of sinkholes in the natural karst landscape. I’d seen a photo and mistakenly thought that the water in red lake was actually red. Little did I realise that the red was a reflection of the red iron ore rich hills which surround the lake. Oops my bad. One lake was a most beautiful emerald and the other a deep sapphire colour. If it wasn’t so wet it would’ve been nice to spend some time in the park exploring. However, sometimes nature puts a real dampener on enjoying nature and as the steady rain fell we headed out of the town towards Mostar.

At the border a little single width booth greeted us and I started to expect the worst. After passing through the Croatian border we held our breath as the Bosnian border guard put his cigarette down to inspect our passports. He was saying something to his offsider whilst holding our passports up. Nervously we kept smiling and wondering what he was saying. Was he asking his mate about denying our entry or was he just remarking to his mate “check out the amount of stamps and visas these two Aussie passports have got! ” Either way we were not know as he put the passport on the bench, dragged on his cigarette, found a spare spot in the passport and gave stamped it. Then repeated the process on the other passport before passing it back. A mumbled “Hvala” and we were on our way.

The town of Posušje was surprising quite different from the towns we’d passed through in rural Croatia. They were painted in all different pastel shades. The roof line of the houses were a little lower, tiled with flat red clay tiles and the windows fitted with dark wooden shutters. Throughout the town large new shops and businesses lined the road which indicated that the area was quite rich.

There had obviously been lots of rain and maybe some snow melt for as we headed through the countryside and over the mountains towards Mostar there were lots of flooded fields.

One thing I’ve become accustomed to in each country is to get a feel for how people drive and the roads. The first thing I noticed was that the local drivers were super aggressive. Although it was raining, everyone was travelling at least thirty kilometres over the speed limit and overtaking at every opportunity whether safe do so or not. Lucking their were a few trucks travelling slowly as they ground their way down the steep hills which I quickly overtook. They provided a nice buffer with the traffic which was getting a little nutso for the conditions. As we’d already seen one car upside down on its roof in someones front garden in Imotski we weren’t taking any chances.

Eventually we wound down the hill into the outskirts of Mostar where after cutting through some backstreets and across a bridge we were arriving at tonight’s homestay. We had been told that it was not ont he satnav but to text when we arrived, well due to the weather the phone was saturated and despite drying it off the touchscreen wouldn’t recognise my fingers touching it. So trying to call was out. Eventually after knocking a few times the font gate opened and we were ushered inside, bike included.

Our host seeing how wet we were broke out the grappa (a fire breathing mixture at that) woohoo. Soon the room and the balcony was covered in bike gear hanging up to dry as we changed into dry clothes. 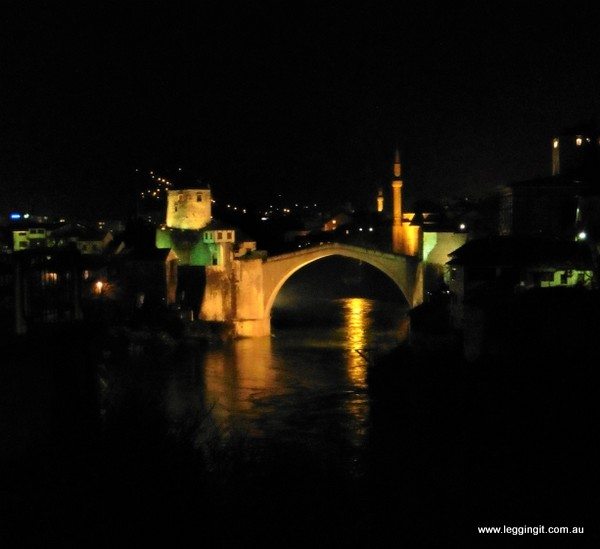 After dark we ventured out into Mostar to get a glimpse of Stari Most, the world famous bridge and find something to eat. Of course we went the wrong way and soon found that graveyards flanked either side of the road. Judging by the relative newness of the gravestones it looks like they are some of victims of the sieges of 1992 and 1993. A tragic time for the citizens of Mostar and the whole country of Bosnia and Herzegovina which we are still trying to fully understand. The first casualty of war is the truth. 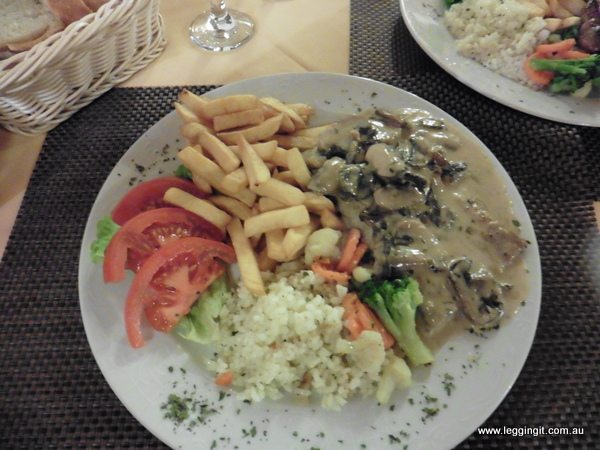 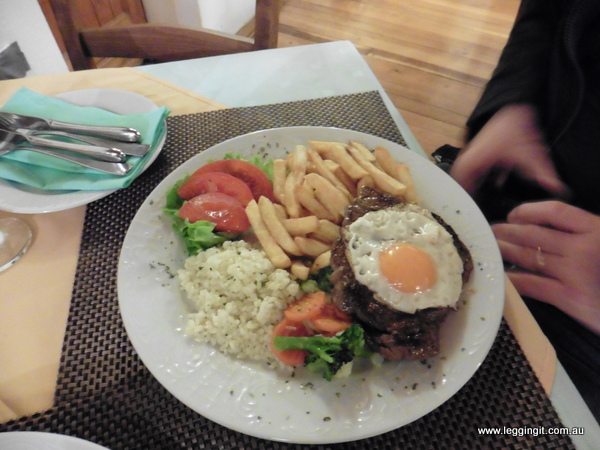 Eventually we headed back in the right direction to the old city, where we found an open restaurant. Veal with mushrooms for Michele and steak, eggs and chips for yours truly was just perfect.
With steady rain still falling we headed back to the apartment where we settled down for the night to hope and dream of a dry day tomorrow.