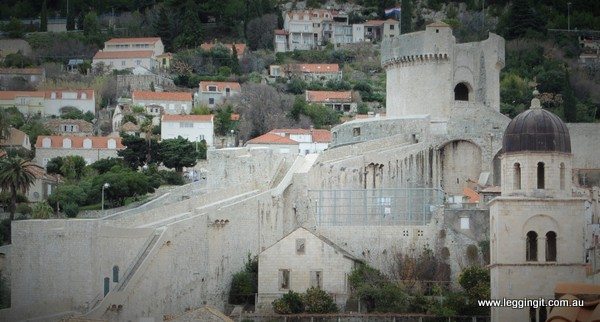 We caught the bus into the old city of Dubrovnik today for our first taste of the city which Michele has wanted to see since she was in her twenties. Although there’s a little bike parking on either entry to the old city we decided the bus which only costs 15 kuna might be a good break. 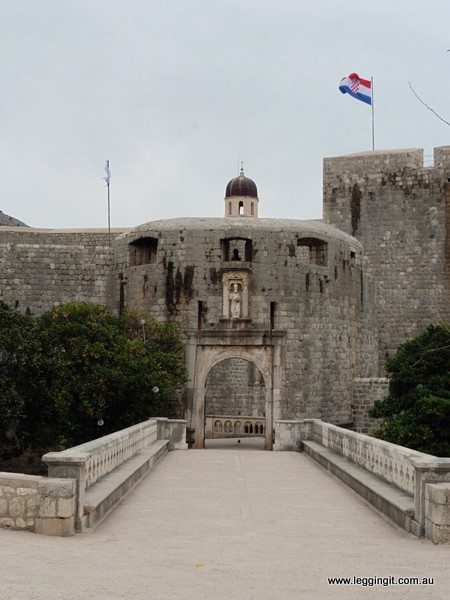 Our first glimpse of the old walled city was amazing. After passing through the drawbridge and through the main gate the view down the Main Street is just amazing. Colourful clay tiles top beautiful yellowish stone buildings.

Our stop was a coffee shop, where we learnt the first lesson of Dubrovnik. Location, location, location. Yep, in the main street everything is more expensive. So for two coffees we paid 56 kuna (about $10). As Michele hadn’t had breakfast we skipped buying anything else and headed for the Mljene bakery instead and found a feta and spinach burek for about 8 kuna.

One coffee wasn’t enough so we found an Irish pub where the coffee was good and half the price of the Main Street. The service was great and the barman was really friendly so it became our official watering hole. 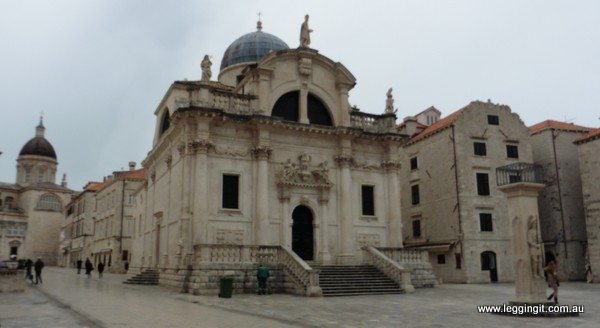 We went for a wander around the city, checking out the beautiful old buildings and churches. At this time of year as there are no tourists, it’s time for building maintenance, and the churches are no exception. A number of them had scaffolding erected and were busy conducting repairs. 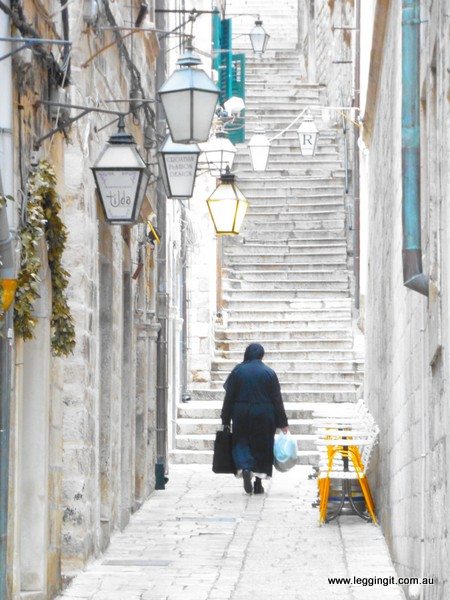 After wandering around the cobbled streets we eventually found ourselves at the Ethnographic Museum. As it had just started raining we decided that a museum might be a great way to stay dry. The lady at the desk sold us a Dubrovnik Museum card which covered the nine museums of Dubrovnik. It sounded like a good deal but after handing over 100 kuna each she then told us that the Bishops Palace, (the place we actually wanted to visit) was closed for renovation. I was tempted to give the card back and retrieve our money.

The bottom floor of the museum traces Dubrovnik and Croatia’s modern history, leading up the world wars. There’s lots of storyboards and cases with artefacts. Below it, in the floor are 16th century grain silos, with lids that protrude above the floor. We had to be extra careful not to fall over the hatches. They’re covered with glass so we could see all the way to the bottom and they looked like they could still be ok to use today. One interesting artefact in the bottom floor is the Steel Soldier. During World War One a carved wooden soldier was put on display. Donations were raised amongst local residents by selling steel tacks and brass tally plates, which were then hammered into the wooden statue. The soldier looks quite amazing with all the tacks all over it.
After taking photos of the statue our two “minders” suddenly stopped talking, to tell us “No Photos”. It was like some scene out of a Cold War movie as the two girls followed our every move just a few paces away. It was extremely uncomfortable as it felt like they were watching in case we stole something.

On the next floor was an array of farm implements, which were all numbered, however the display boards with the names of each item were in the centre of the room so we had to walk back and forth. The top floor had a display of Folk costumes in glass cabinets in the centre, while stitching and handicrafts were around the outside of the room. We couldn’t wait to leave the museum and regretted that we’d bought the stupid card as we headed towards the Natural History Museum. 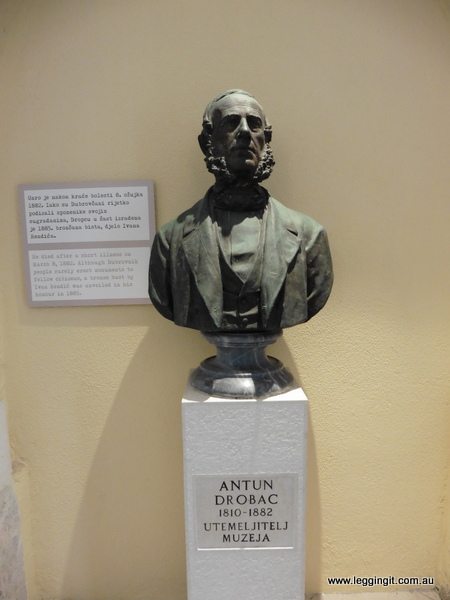 The reception at the Natural History Museum was warm and inviting. We were given information booklets and directed towards the collection.
Dubrovnik Natural History Museum developed from the private collection of Antun Drobuc, a local pharmacist who was also first commercial producer and supplier of pyrethrum.
His collection of all sorts of objects combined with those from the Chamber of Commerce was the basis for the original museum which opened in the late 1800’s. The museum also tells the story of Baldo Kosić, a local high school teacher became director of the museum, when Antun died. He was a keen natural historian who collected, prepared, conserved the items he collected and published his scientific results. 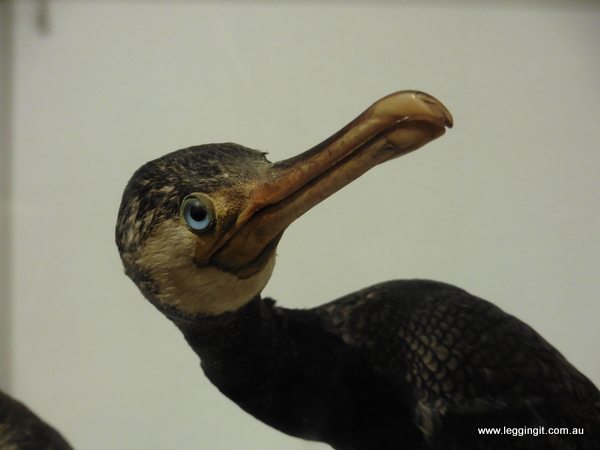 In the foyer there story is told on story boards and displays. It’s a quaint little museum with all sorts of items on the first floor, such as stuffed animals, birds, and fossils. It included this fellow who was the first bird I had seen with blue eyes.  On the second floor it’s a little funky with a shell collection, in one room, encased in plastic bubbles hanging from the ceiling. In the other two rooms the story of the fish which live deep within the Adriatic. There’s also some great info on undersea exploration. It’d be the perfect place to bring kids with a little interactive displays.
As it was getting on towards lunch we headed back to the Irish pub where we tried a local specialty for lunch.
After lunch we headed for the Dulčić Masle Pulitika Gallery. A gallery which displays the art of the three famous city sons. The gallery is quite small with paintings and interactive displays of the three artists on the first and second floors. 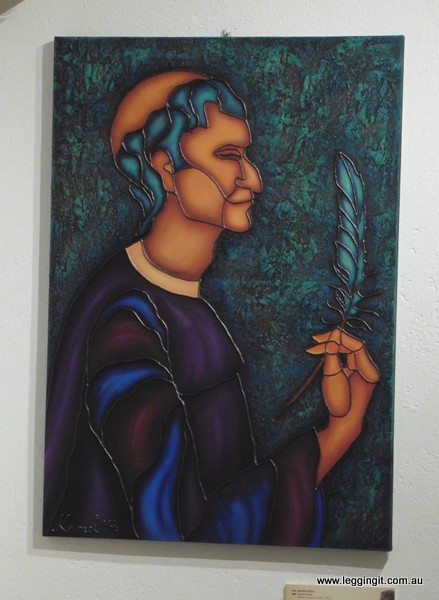 Our last stop for the day was the House of Marin Držć, a local playwright. There’s also a statue of him next to the Bishops Palace. It’s got a shiny nose and hands from people rubbing it for good luck.
Marin was famous for his plays and writings which were rediscovered in the 18th century. One of his comedies Uncle Maroje was to bring him back to fame and make him the most successful Croatian playwright when it was put on in 1938, in Zagreb. The two story museum tells his life and how he studied for a life as a priest before realising that it didn’t quite sit right with him. He was to die early after a pretty wild and exciting life. He never received the accolades for his work whilst he was alive, because it was a bit racey, and not until long after his death did the public really enjoy his work.
As it was getting late we headed for the bus. Hopefully, if the weather’s clear tomorrow we will visit a few more of these museums.