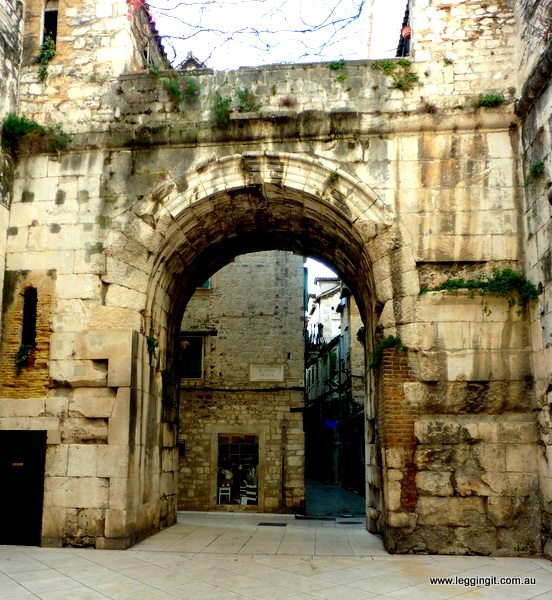 Today we met up with Lea, a local guide for Jewish Tour of Split to learn more about the Jewish history of the area.

Although the Jewish community of Split only number 100 today, they’ve been a part of Dalmatia since Roman times.
Emperor Diocletian was known to wear the finest purple cloaks. In fact he was the man responsible for making that colour associated with royalty. As Jews at the time extracted the dye from a snail to produce the colour purple, Diocletian’s favourite colour, it’s suggested that he may have employed them. Jews throughout history have been renowned to be fine tailors and skilled dyers. 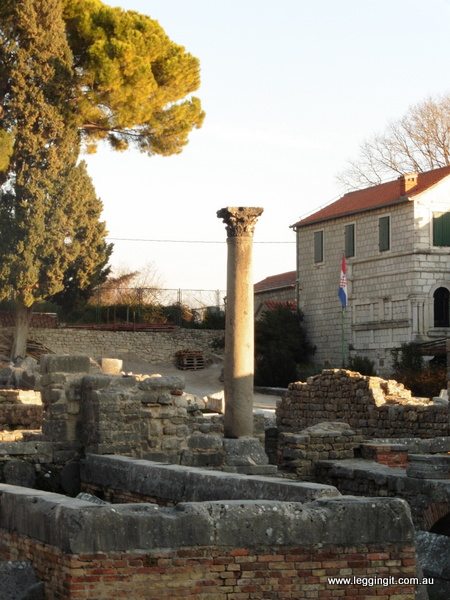 In the ruins of the nearby old city of Salona, the former capital of Dalmatia, parts of a sarcophagus, jewish jewellery, and oil lamp, bear witness that the Jewish community were in the area in the 3rd century. The items are now held in the local museum. After the sack of Salona in the 7th century by Avars and Croats, refugees fled to nearby Diocletian’s palace for protection. Among the refugees were Salona’s Jewish community. 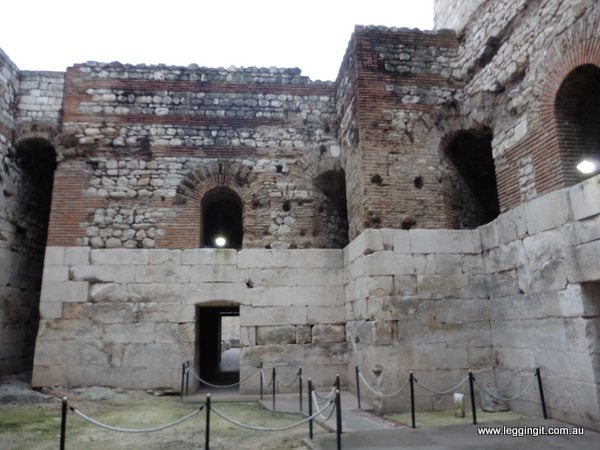 Diocletian’s Palace of course had changed since the fall of the Roman Empire and the recall of the Imperial Army. The citizens had moved inside the palace walls for protection and a city had developed.
In the basement of Diocletian’s palace menorah’s (Jewish candelabra) are scratched into the walls in a few places suggesting that the displaced Jews may have used the basement as a synagogue.
Not much is known about the community, as there are few written documents, it is thought the fire of 1507 which destroyed the Bishops Palace, may also have destroyed the records and also the synagogue.
The Spanish Inquisition of the 15th century brought the next wave of Separdic Jewish refugees to Split. During our visit to Spain last year we learnt, after the reconquest of Spain the joint rulers Isabella 1 and Ferdinand II, issued the Alhambra Decree in 1492. (As a side note this edict was only revoked in 1968).

In the edict Non-Catholics such as Muslims and Sephardic Jews were given the choice, convert or leave. However, those leaving weren’t allowed to take money, silver, gold or anything prohibited by the kingdom. In Spain we heard how many perished fleeing the country. Rumours were circulated that some people swallowed gold and diamonds so some refugees had their stomachs slit open. Others became the victims of captains who after taking all of their money threw them overboard. Many of those who stayed became victims of the Spanish Inquisition in Spain and Portugal. 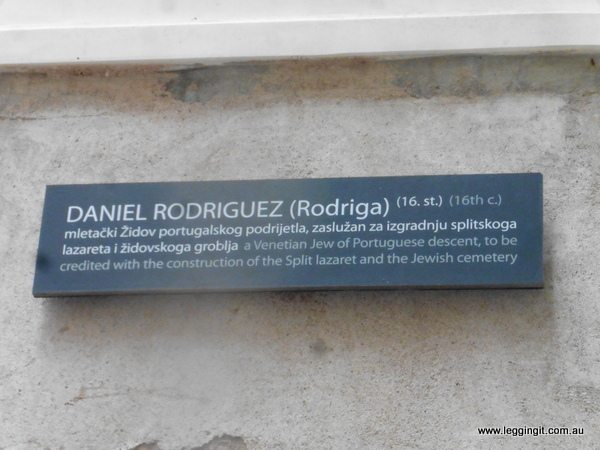 One man who made it all the way to Split was Daniel Rodriga a Portuguese refugee who secured a deal which turned Split into a major trading port for the Venetian republic. It benefited both  the local Jewish community and the inhabitants of Split. One of the benefits were a purchase of a parcel of land to be used as a proper cemetery, until then Jews had been buried outside the Christian cemeteries. 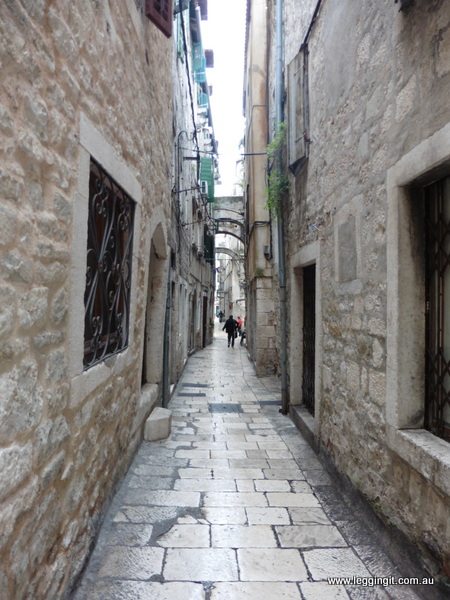 Across the Venetian republic the laws required Jews to live in ghettos and have a curfew requiring the ghetto to be locked every night. Another benefit was the granting of special freedoms, which meant the Split ghetto wasn’t locked every night.A street in the centre still bears his name.

The Sephardic Jew refugees swelled the numbers of the local synagogue so much that it had to be expanded. It was interesting hearing how until this time women hadn’t been allowed at the synagogue, however with the expansion women were able to have their own area. The only problem for the men was that they couldn’t tell their wives they were at the synagogue and then sneak off as their wives could now keep tabs on them.

Unfortunately the freedoms were not to last, as the city of Split was under Venetian rule. In the early 18th century lock downs started and the Jews faced new rules and restrictions. 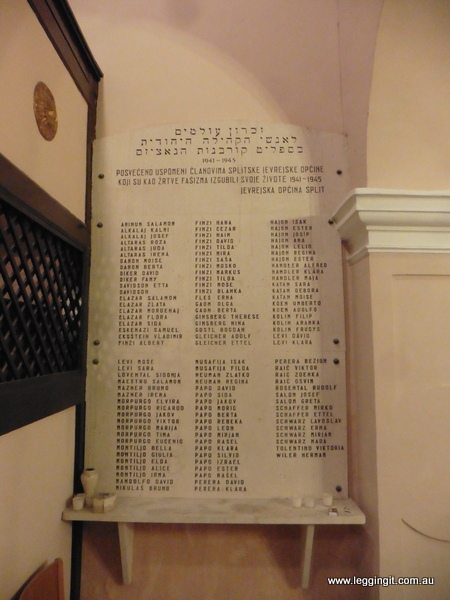 We also learnt that initially during WW2, under Italian occupation Jews weren’t persecuted. Some were sent to labour camps however, as a whole there were no death camps. The Italians also kept them safe from the Ustaše, (Croatian Fascists).
When Italy surrendered hundreds of Jews either escaped to Italy or joined the partisans. When the Germans took control of the city some local Jews stayed thinking that life would be like before under the Italians. Sadly, all the remaining men, women and children were sent to camps for extermination. At the synagogue the names of the dead are recorded on the wall. After the war survivors of camps returned to Split to rebuild the community.
It would be easy to walk around Split not realising the Jewish history. There’s no outwardly Jewish symbols and like any sane person most Jewish people have moved out of the old city. It’s the same for lots of former residents of heritage listed sites. The tourists, the noise, higher costs and the restrictions on the buildings, would be all good enough reasons to move out to the suburbs. Lea pointed out on some of the houses the carved niche where the mezuzah (a small piece of parchment with a verse from the Torah) had been. 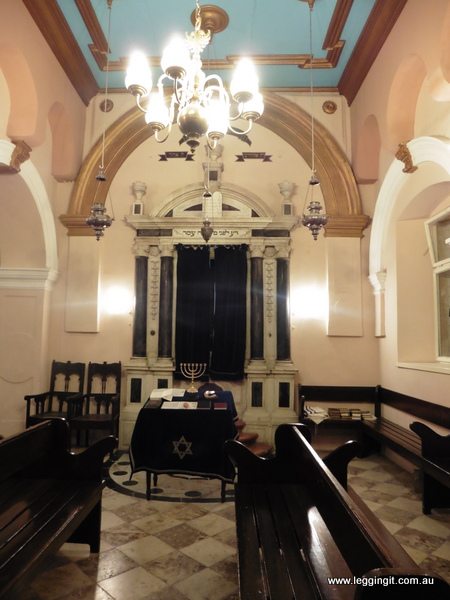 Although the synagogue is the third oldest in Europe and it would be quite easy to miss as it’s housed in the first floor off a narrow lane in the old Jewish ghetto. As there were restrictions on signs there was no Jewish symbols allowed on the outside of the building. Inside its a small synagogue and it’s hard to imagine how it would’ve looked when there was a community of 300 people all using this one room. At the rear the doors which led to the street now are part of a cabinet where important items of faith that’d been buried to protect them during the war are now displayed. Also at the synagogue we met another member of the local Jewish community, who could’ve talked for Croatia. He told us stories of the local community, some of the history and what it meant to be Jew in Split. With Lea they explained how the community struggled to keep its young people. Better job opportunities elsewhere was a pull factor not just for their community, but for everyone in Split and the whole of Croatia. 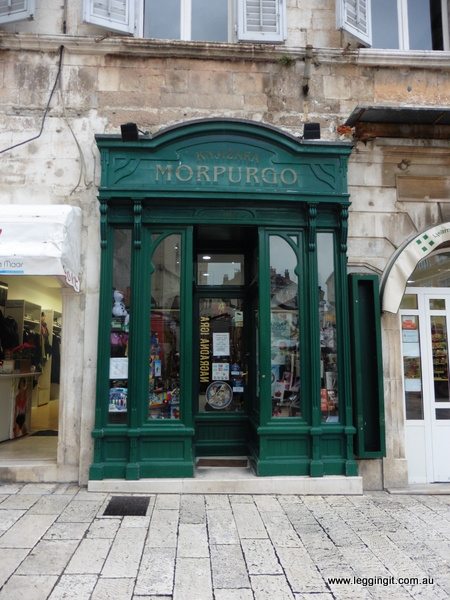 It was fascinating talking to them both about what it meant to be a Jew and how they saw themselves in the world.
As it was raining the last stop on our tour was Morpurgo bookshop. Started by a Jewish family it’s the oldest bookstore in Croatia and third oldest in Europe. Although the store is now owned by another family the store still retains the name and is painted as it was in 1860. The current owners still operate as a bookstore and even if they sell it, the site can only be used as a bookstore. 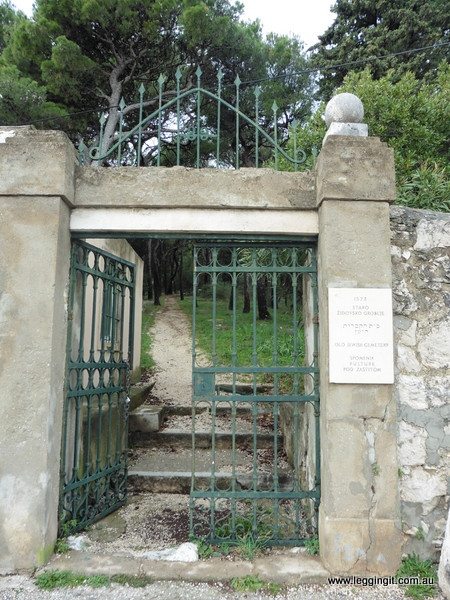 Due to the rain we decided to visit the old cemetery on another day as we’ve got lots of time left in Split. It’s located within walking distance of the centre of Split, so it’s easy to get to. The cemetery which opened in 1573 was open until the start of World War Two. When the city decided to relocate all the cemeteries, to the suburbs, as the cemetery was on private land, and after much debate it was left untouched. We look forward to wandering around it, as we’ve visited a few Jewish cemeteries in Europe and Morocco.
A cup of coffee was the perfect way to finish the tour. Lea was a great guide, who was open and friendly. We chatted about all sorts of things and the tour felt like a friend showing us around. It was not only a great way to gain a sense of the Jewish heritage of Split but also lots of interesting information about Split itself.