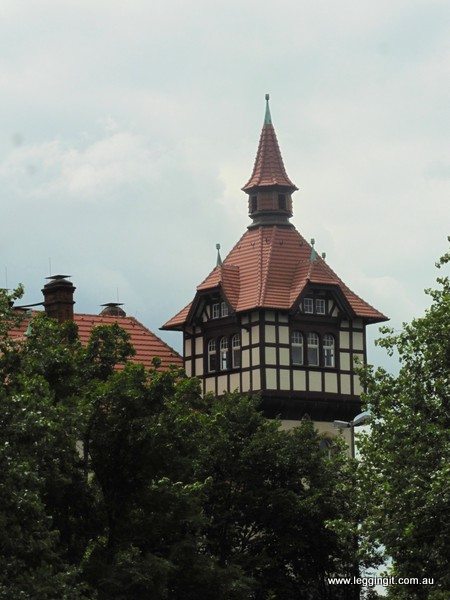 It was raining this morning when we woke up and as predicted by Michele’s weather app the rain continued right up until 8 o’clock. It was a fairly early start this morning as we are travelling from Freiburg to the Australian Embassy in Frankfurt to vote. As voting is compulsory in Australia their are four choices we could make. They are postal vote, submit an absentee note or vote at the closest Australian Embassy or send in an unable to vote form. As we really wanted to vote in this election, Frankfurt was our destination and we had to arrive by 4pm.
It’s been really nice catching up with Mary and Felix over the last three days. Every time we play Skip Bo we always think of them as they were the ones who introduced us to the card game. Last night we played Wizard Extreme, (a German version of the card game Seven Seals), into the wee hours so everyone looked a little tired this morning as we ate breakfast together.
After wiping the bike down I packed it squeezing our under jackets into the panniers. The forecasted hot weather puts a lot of pressure on packing with all our extra layers of clothing being squeezed into every available space. Hot weather is nice when you’re at the beach but it can be uncomfortable on a bike especially on autobahns and when stuck in traffic. Everyone raves about German autobahns but in the last few weeks heading through southern Germany with all the roadworks the autobahns have been crazy. As people are heading off or returning from summer holidays long traffic queues clog the autobahns. Thank goodness we are on a bike with the ability to filter through the long lines of slow moving dutch RV’s, semi trailers, cars and fair weather bikers towing their bikes on trailers behind their audi’s.
The trip from Freiburg to Frankfurt wasn’t much fun at all with views of large flat fields of wheat and barley, with hills in the distance. Being on an autobahn really disconnects you from the natural environment with your focus on the road and the traffic around you. We hate it with a passion. It only  took 4 hours with a few stops along the way.

Monitoring the tread depth at one of the stops, it seems the rear tyre has suddenly gone from 3 mm’s to zip in the last 1,000 km’s. However, it has lasted a lot longer than the mechanic in Maribor predicted. But not much more. Time to start looking for a tyre shop around Frankfurt.

Arriving at Frankfurt we headed straight to the Ibis Budget near Ostbahnhof Station and were quite surprised at how new, clean and modern it was. It even smelt of fresh paint. After a quick check-in we headed to the room, dumped our gear and headed into the city. 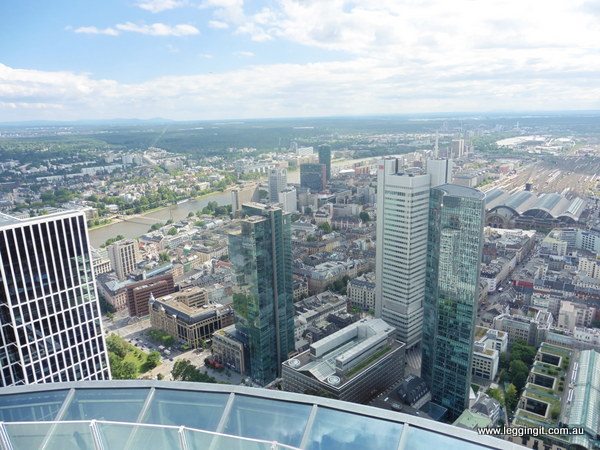 The Australian Embassy in Frankfurt is situated on the 28th floor of a skyscraper in the heart of the business district. Getting there wasn’t quite so easy as roadworks and road closures for the weekend Frankfurt Ironman event caused traffic chaos. Eventually we found the building and parked across the road.

A mob of Australians were loitering in the lobby and after introducing ourselves to reception we were given a ticket and told to join the crowd. The First Lady we met told us she’d been waiting 40 minutes already but was assured her number was next so we found a couch and settled in for the long wait. Well sure enough the lady was pretty close with her timings as we were called just over an hour later.

Two lifts later we were looking out the window of the embassy over city of Frankfurt far below. We met up with two friendly Aussie muso’s, called the Hussy Hicks and had a brief chat. They’re touring Europe at the moment so hopefully we’ll get a chance to see them playing live somewhere. 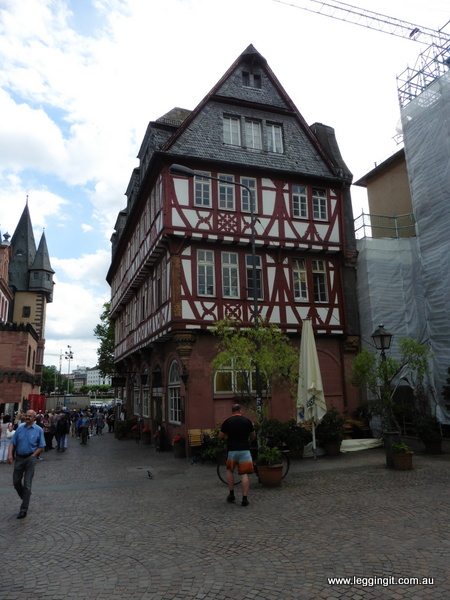 After doing our civic duty we headed to the centre of Frankfurt for lunch. Around the main square a few of the restaurants were charging ridiculous prices for meals but we were able to find a traditional German one just off the square selling good quality meals for half the price.
As we were unable to purchase a replacement laptop in Freiburg we went looking for a computer store and soon found the same chain as we visited yesterday. Unlike the store in Freiburg, the Frankfurt store had lots of different models including the Lenovo 100S we’d enquired about yesterday so pretty soon my wallet was a little lighter and Michele was walking out the door with a new notebook.
Well if you think it was all sunshine and roses afterwards……well think again. When Michele went to set the laptop up she quickly discovered that it and the keyboard was in German. Despite her best efforts she just couldn’t change the language to English and tears started flowing. Eventually after talking through it she was able to download English onto it and set it up.

However, the keyboard letters were still a challenge, as the letters were laid out differently and contained a few with umlauts. But still it was progress. Our next problem was the battery. Despite being on charge all night the battery was almost flat. After checking the power pack and connection I discovered the root of the problem. The power cord was in the wrong hole. It was a bit of a stress reliever as we both had a good laugh about it. 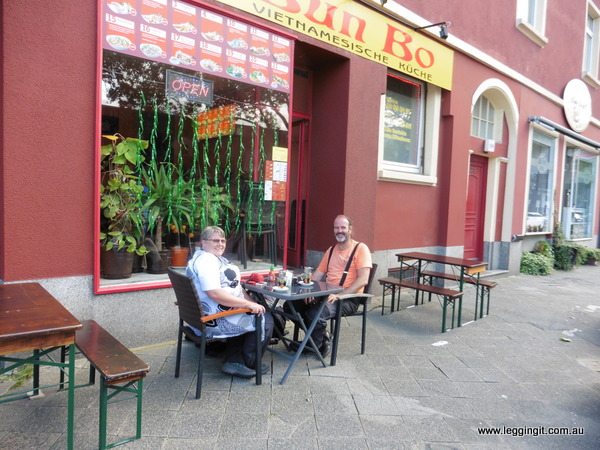 Late in the day we headed to a tiny Vietnamese restaurant just around the corner from the Ibis budget Hotel. Eating authentic tasting Asian food in Europe can be a bit hit and miss but on this occasion we were in luck. Freshly made spring rolls, still warm from the warm water used to soften the rice paper, were just delicious. I just had to try their Pho Bo which had those lovely Vietnamese fragrances and Michele a salad with fried spring rolls.
It was a great way to end a pretty blah type day. Tomorrow we’ll spent the day in Frankfurt exploring the city before catching up with one of our old couchsurfing friends Barbara.