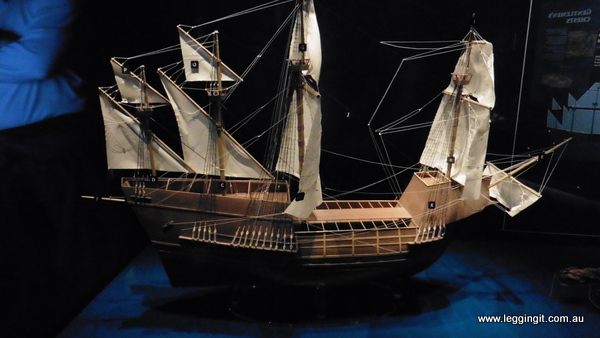 Todays weather forecast was fine with late showers so we headed into Portsmouth to the Naval Museum, which is home to the Mary Rose, HMS Warrior, and HMS Victory.

When we arrived at the visitor centre and checked out the prices our plans for the day had a quick readjustment. The ticket prices were the highest of any museum we’ve been to so far. To visit any of the exhibits the price was £18 each or £28 for multiple exhibits a quick calculation sets that at about $36 Australian dollars or $54 each. Whoa that’s a lot of money in anyone’s language. The tickets are valid for a year so if you were a local you’d be able to visit all the attractions as not all of them are actually at the dockyard.

Begrudgingly we paid £18 each to visit The Mary Rose and then they wanted extra
money for a guidebook, Ron was not happy.

Mary Rose was a warship built for Henry VIII, in 1510. The King inherited a fleet of 15 warships but was flush with money so spent lots of it building up his Navy to fight in wars against France, Scotland and Brittany. During Mary Rose’s 34 years of service she had been refitted many times as armaments changed. During the Battle of The Solent in 1545, The Mary Rose along with the Henry Grace headed the kings fleet now numbering 80 ships against the French fleet. It’s believed that Mary Rose fired a broadside to starboard and then changed course to fire her guns on the port side. The Mary Rose healed over on the rudder which caused the gun ports which were still open to take in seawater. As the ship keeled over she started to sink causing all sorts of equipment to come crashing across the decks from the opposite side. As ammunition, supplies, storage containers, equipment, the massive port side guns came crashing across the port side brick oven collapsed along with the 360 litre copper basin. Anything in their way, men included, was crushed and destroyed. The crew tried to escape the inevitable however, the upper-deck was covered in netting to repel boarders so of the 400 strong crew only 35 survived.

The Mary Rose settled on her starboard side some of her guns and rigging were recovered but after attempts to raise her failed she was left. Over the years her exposed timbers were attacked by molluscs, fungi, woodworm and erosion until everything was gone and silt began to build up over the wreck.

After many years of research the wreck was finally raised in 1982 after spending 437 years underwater. Since then The Mary Rose has been housed in a purposes built building where it’s spent the past 35 years in conservation. This conservation started with firstly washing all of the salt water out of the timber with fresh water which lasted from 1982-1994. S o that the timber doesn’t dry out and warp it has been sprayed with Poly Ethyl Glycol from 1994 until 2010. Since then it has been undergoing a slow drying process which is due for completion in 2017.

As we entered the museum there were bits and pieces which told the tale of Mary Rose’s demise including a Tudor period picture which showed the French and English fleets lined up during the Battle of the Solent with Mary Rose’s masts sticking up in the water where she’d sank. The museum was set on three levels with walkways between each end with windows allowing a view into the interior of Mary Roses hull. The huge trunking pipes running through the hull to dry it out make the hull look pretty industrial (it’s like being back on a building site in Ron’s opinion) On the opposite side are bits of equipment which would’ve been on that level of Mary Roses decks. Cannons, rope, storage trunks, cooking ovens. At each end of the museum trunks recovered from the wreck tell the stories of their owners. The shipwright with his tools, rulers, the gunner with his gunpowder measure and whistle. Amazingly enough there where a large number of these trunks discovered.

Along with these trunks 135 skeletons were discovered, some of them almost intact and able to give an insight into the crew members. From the skeletons they were able to discover that most were from the West Country. A few even were made up to what they would’ve looked like. There were a few interactive displays which was quite interesting including how the different guns onboard worked, kids games on how to load ships and lots of touch screens which helped to learn more.

Overall it was an excellent display, however at £18 each we were disappointed and maybe should have saved our money to visit Vasa next time in Sweden. Vasa is a complete ship dating from 1626 which was recovered in 1961. Mary Rose however is part of one side of a ship, so you have to use your imagination a lot. This may improve in 2016 once all the tubing is gone though.

After lunch at a local lunch bar we waited for the un forecasted rain to end before we headed back to our couch surfing hosts house where we knocked up some good Australian food for dinner. Yep spaghetti Bol and garlic bread.

After tea we relaxed in front of the open fire chatting and drinking endless cups of tea until bedtime.

Tomorrow we say goodbye to our hosts and catch the afternoon ferry to France.