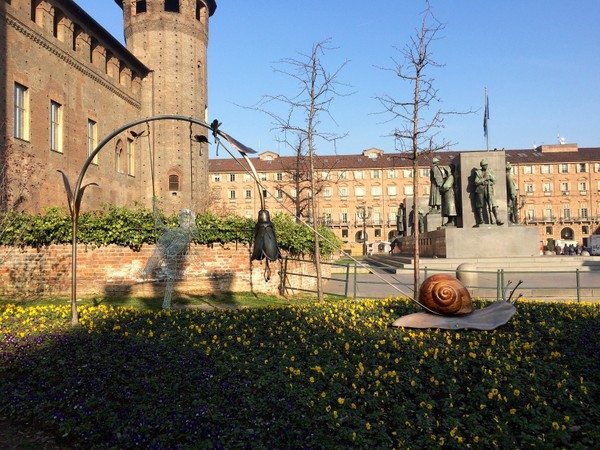 We spent two days in Torino (Turin) exploring the city. Torino (Turin) is home to some of the most beautiful Baroque style buildings which date back to its time as capital of the Kingdom of Savoy. It was also part of France during the reign of Napoleon. In the mid to late twentieth century it became home to the car industry and is known as Italy’s Detroit. It’s home to Lancia, Alpha Romeo and of course Fiat which is short for Fabbrica Italiana Automobili Torino. So Torino also puts the T in Fiat.
The first day we decided to walk into the city from the hotel. It was good twenty minute walk through mostly housing and light industrial before we hit the heart of the city near the central market place at Piazza Della Repubblica. After a day spent walking we decided to use public transport, whenever possible. The Tickets were easy to purchase from tabac’s or small vendors and really saved our feet. The tram and bus system was actually quite easy and affordable to get around in Torino.
The markets at Piazza Della Repubblica are supposedly some of the largest in the world and have separate sections for clothes, souvenirs, leather goods, shoes, flowers, fruit and vegetables. Fashion seemed to be the number one seller at the markets and there were more than enough stalls selling the latest knockoffs. 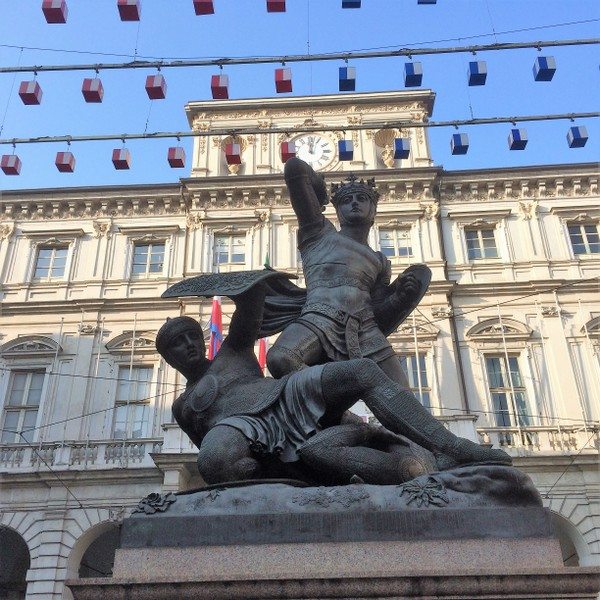 From Porta Palatina near the markets, to Piazza Palazzo Da Città is a short walk. The piazza was decorated with hundreds of hanging red and blue lights. The Piazza Palazzo Da Città was so beautiful with all the lights and surrounded by beautiful palatial buildings. The piazza features a statue of Amadeus VI (better known as Conte Verdi or the green count) fighting a Saracen.

Amadeus VI was Count of Savoy from 1345 until 1383 and was a skilful leader. He led a crusade against the Saracens and used his military to secure greater lands for Savoy. He was a skilled negotiator and negotiated peace between northern Italian kingdoms of Venice and Genova. He also accompanied Louis I, the Duke of Anjou (where we’ve just visited recently) in an expedition to Naples. Conte Verdi was nicknamed as such because he dressed for tournament in green and had his knights and ladies do the same.

From Piazza Palazzo towards Piazza Castello the buildings all have cover walkways with glass display panels within the archway. There are lots of old artefacts on display, some of which are quite old and some are quite amusing. 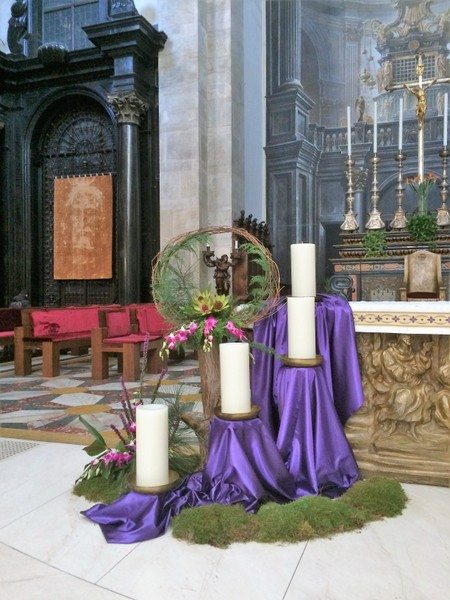 Through luck more than good planning we arrived on Via XX Septembre not far from the Cathedrale Di Torino, or as it’s also known as Duomo Di San Giovanni Battista (the Cathedral of Turin, Dome of John the Baptist).
Quite surprisingly it’s not ostentatious like some of the cathedrals we’ve seen, however it does house what some consider one of the most important religious artefact.

Behind the apse at Turin Cathedral is The Chapel of The Holy Shroud. The Shroud of Turin is only on display on special religious occasions. For the rest of the time it is housed in a silver box in a controlled environment within the chapel. The chapel is open for prayer and for public viewing at different times during the day. The shroud has been cloaked in mystery since it was announced to be in his possession by knight Geoffroi de Charnay in 1354. He put it on public display in 1389 and the Bishop of Troyes called it a fake. Since then it’s been surrounded by controversy. It came to Turin after it was passed to the House of Savoy by Geoffroi’s granddaughter.
The earliest photograph of the shroud was taken in 1898 by Secondo Pia. It was actually the negative of the photo which was to reveal the image of a man. Whether you believe in the authenticity of the shroud or not its still quite fascinating.

The shroud has been studied and scientifically tested over the last century. The tests have revealed the cause of some of the marks on the shroud. These include; damage from water and fire sustained during the Sainte-Chappelle Cambéry fire of 1532, bloodstains and other liquid stains which were tested to be human and pollen from the Palestine and the Middle East region.

The true artefact or an elaborate fake? The Shroud of Turin is housed in the Cathedrale Di Torino, Duomo Di San Giovanni Battista and entry is free.

The cathedral was built over Roman ruins and many can still be seen in the garden next door. Across the road there are also ruins at the Piazza Cesare Augusto. 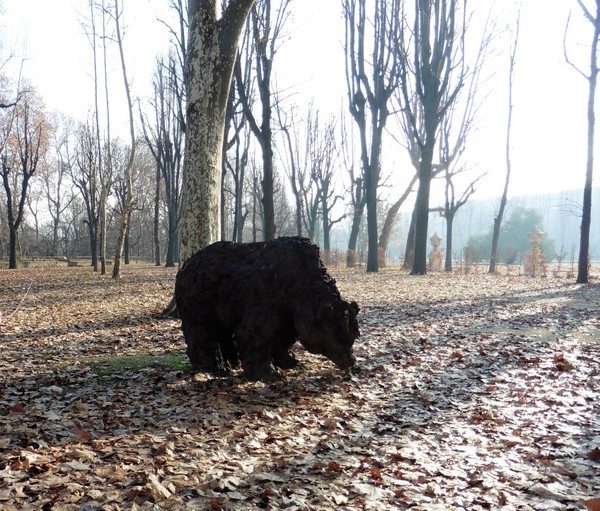 Around the area are lots of sights associated with the Italian royalty including the Pallazzo Reali and Giardini Reali. Due to the weather the gardens at both were both pretty dead although there were bears to discover. 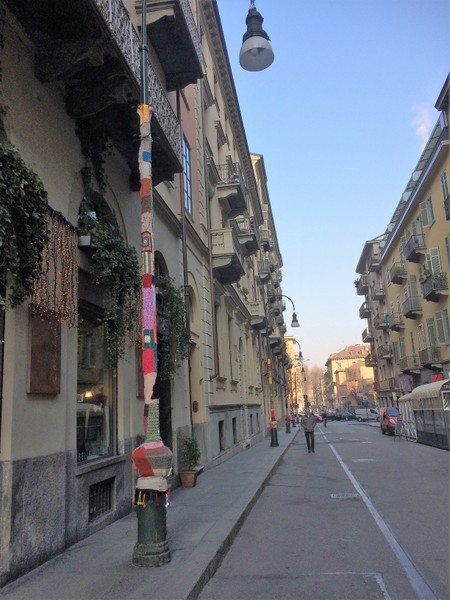 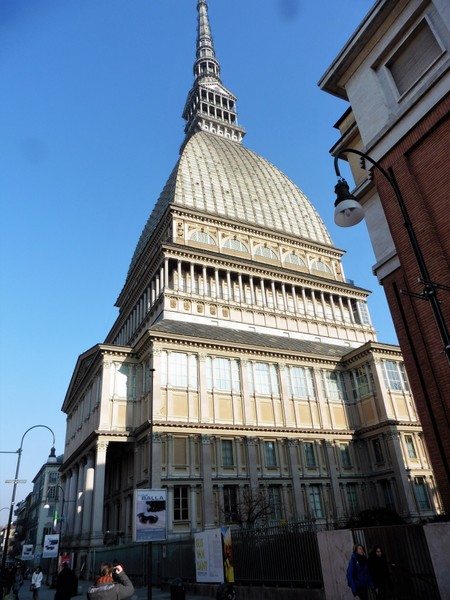 Nearby is the imposing square tower or Mole Antonelliana, the Museo Nazionale del Cinema. The tower is quite popular for views over the city however, as it is so foggy it was no use going up to the viewing platform.
We headed back towards Piazza Po and wandered along the covered streets. The covered walkways feature glass cabinets in their pillars filled with all sorts of curios related to the shops which front them. 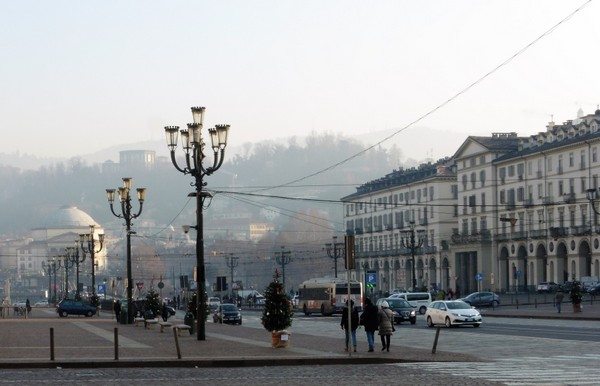 At Piazza Vittorio Venuto the buildings open out into a large open space with views across the bridge over the Fiume Po to the domed Church of Gran Madre Di Dio. 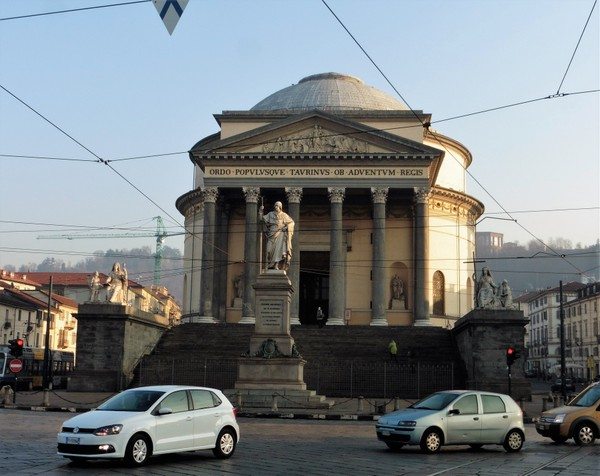 The church was built in neo-classical style in the early 1800’s to celebrate the reinstatement of King Emmanual I to the throne, after the defeat of Napoleon. The church is circular with a domed roof and a portico supported by Corinthian columns. 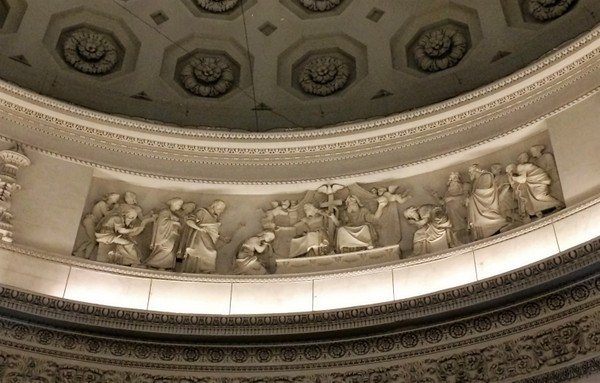 Inside the church is quite exquisite with chapels framed by columns, and the dome is surrounded by plasterwork bible scenes. There is a real beauty in the churches simplicity. 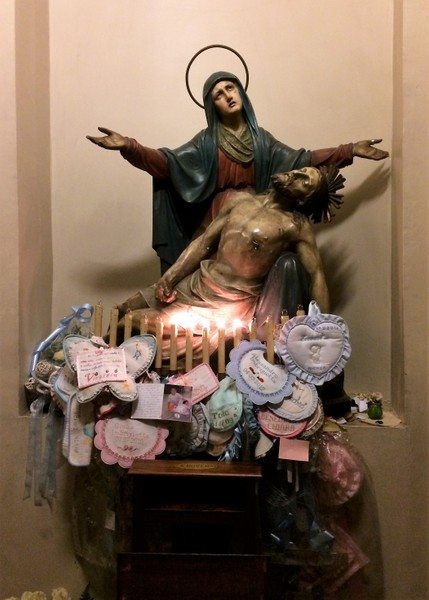 There was also a statue where families had attached homemade thank yous for the birth of their child in the form of baby bibs.

The church is elevated above the street with a long line of steps leading to the church, making it quite imposing. The stairs were featured in the film “The Italian Job” and we remember watching the Mini’s bumping down the stairs. 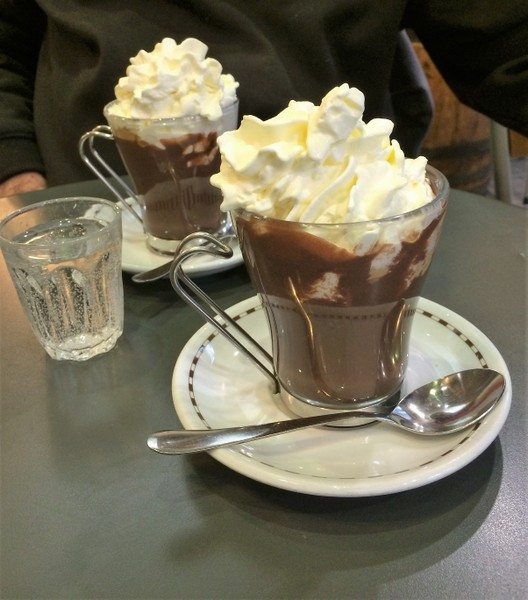 The walk up Via Po took us past all of the high end shops and some lovely Art Deco style cafe’s. One of the most famous cafes along Via Po is Caffè Fiorio? It’s said that it was here that in 1704 Torino’s famous coffee, chocolate drink Bicerin was born. Consisting of three separate layers of chocolate, espresso and whipped cream served in a glass, Bicerin is a drink like no other. As you drink it you are assailed by three distinct flavours. After sampling a Bicerin our advice is to do so on an empty stomach for Bicerin is quite rich. 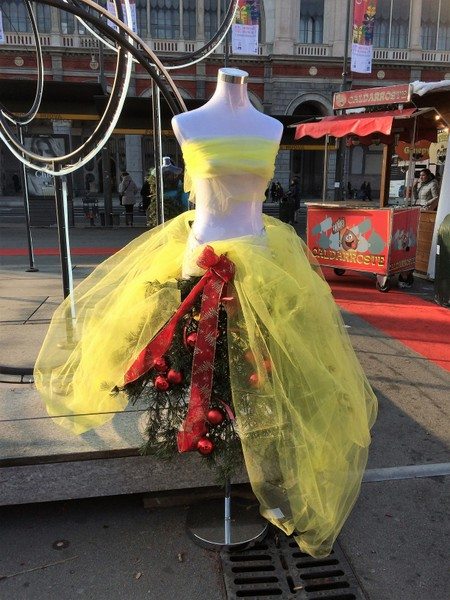 One of the things a little easier to eat was Sicilian Licorice. During the Christmas period the piazza surrounding Castelo Degli Acaja is transformed with Advent Markets. The markets sell all sorts of Christmas goodies from nativity pieces, decorations, food, gifts, and Italian licorice. As soon as we tasted some we were hooked. Unlike the standard commercial licorice we’re used to, this licorice is made from the licorice root. It was really tasty and a little different. 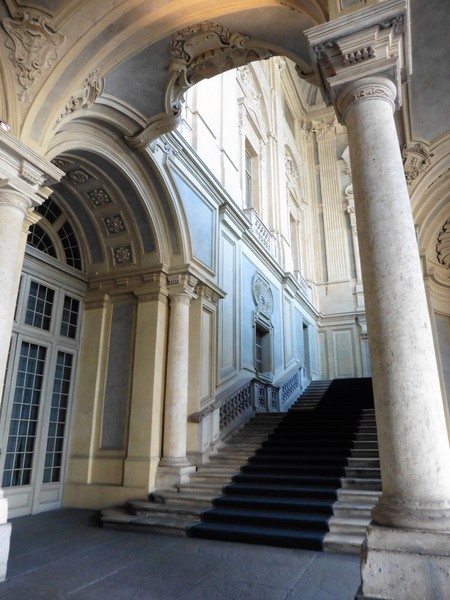 The Castelo Degli Acaja is adjoined to Palazzo Madama, which is Torino’s Museum of Ancient Art. Palazzo Madama overlooks Piazza Castelo which is surrounded by lovely 18th century buildings. The lovely long Piazza Castelo was built to accentuate the Royal Palace (Palazzo Reale) and Piazza Reale. The Palazzo Reale was built in the 16th and 17th century by the rulers of Savoy. On the facade it’s plastered and finished in creme colour. On the inside the red bricks are left bare and the inner courtyard features an open balcony around the interior. Strangely enough whilst wide streets of Via Po extends off at an angle to the castle. 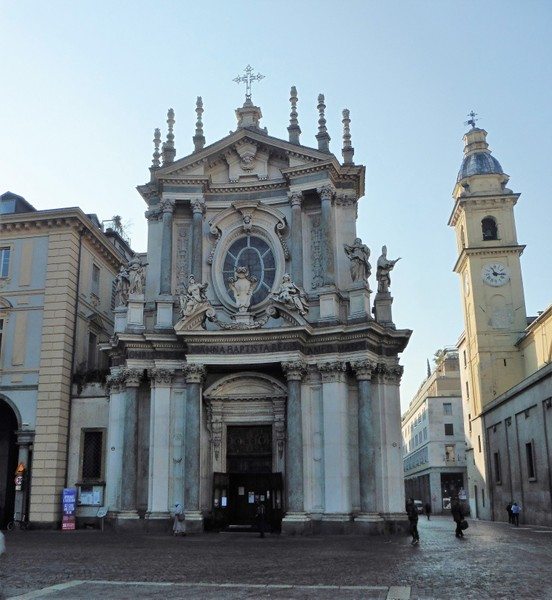 Via Roma starts at the end of Piazza Castelo squeezing between buildings before opening out into Piazza San Carlo. It’s an odd set up for as it leaves Piazza San Carlo, Via Roma has to squeeze between two churches as it slowly makes its way towards Stazione Di Porta Nuova. Chiesa Di San Carlo Borromeo and Chiesa San Christina are almost an identical pair of baroque style churches. 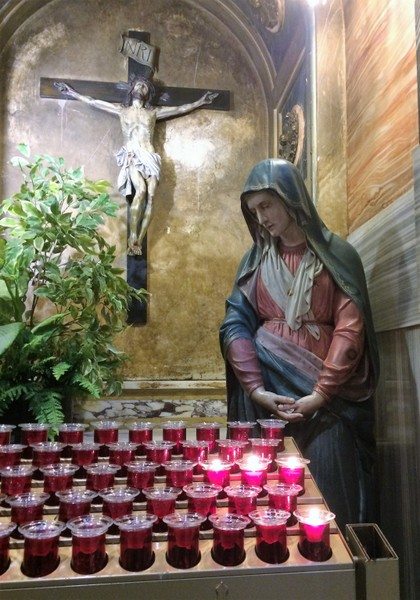 It seems odd that the two churches would be build so close together. San Carlo Borromeo and San Christina were built in the 1600’s but weren’t finished until 200 years later. They feature two levels of columns on the facade. Inside Carlo Borromeo feature frescoes on the walls and ceilings. They are quite beautiful inside and feature lovely marbled chapels. There’s also a bit of fake marbling which was a cost cutting measure in the 19th century. There’s even a full size picture of the shroud of Turin. 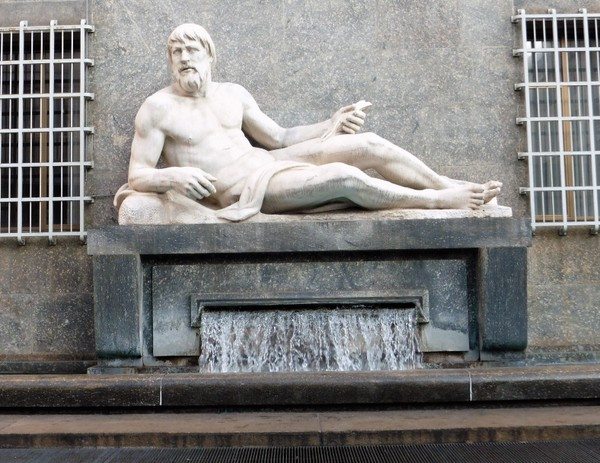 Not far from the church are the two fountains which represent the two rivers of the city. Built in the 20th century the marble Female and Male statues represent the Dora and Po. It was part of the building scheme which saw many buildings built along Via Roma in the Mussolini era. The covered walkways feature lots of grey granite of 20th century style however lack the soft style of the earlier buildings along Via Po. 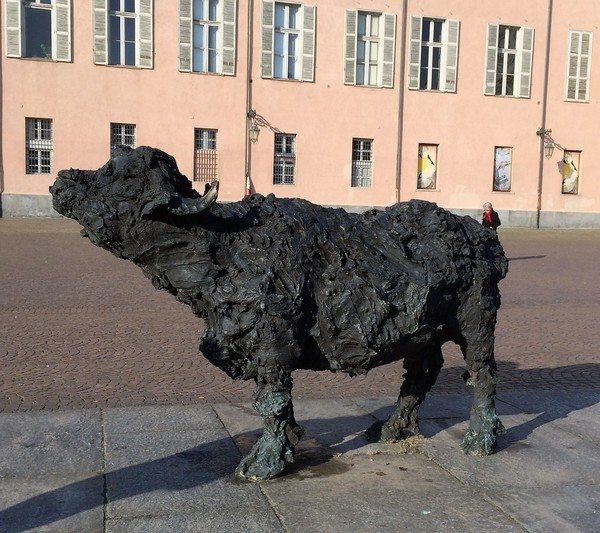 Just walking around Torino you soon discover an interesting mix of architectural styles with each period trying to outdo the last with grand buildings. In Torino there’s always something new to discover, whether it’s the bears and the buffaloes at the Royal Palace, roman gates on Via Po, Bicerin at a local bar, or shopping on Via Garibaldi. There’s a little something for everyone.