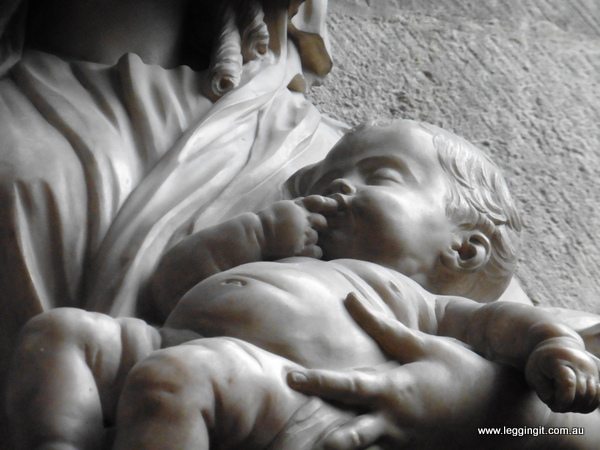 After spending two days in Lille catching up with friends we’re back on the tourist trail in Rouen. The ride through the city was nice with a mixture of new buildings and old buildings some dating back to the Middle Ages. Rouen sits astride the River Seine so was an important trading centre with Paris. We parked the bike alongside the Cathedral and took a look inside. 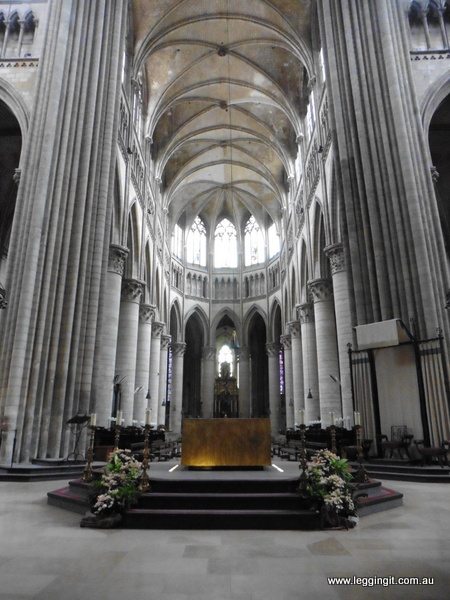 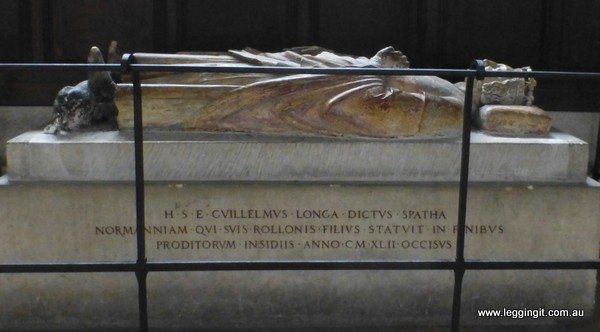 We soon discovered Rouen Cathedral houses the tomb of Rollo (Rollon in French). Rollo was a Viking lord who raided France who was bought off by King Charles of France. He was granted lands along the coast of France later known as Normandie and in return offered protection. Rollo’s descendants were the dukes of Normandy. The most famous Norman of course was the 7th Duke, William the Conquerer who defeated Harald and the Anglo-Saxons at the Battle of Hastings. It’s interesting that we’ve visited William the Conquerers castle at Caen in Normandie, the Bayeaux Tapestry (which documents the Battle of Hastings) and the battlefield near Hastings. It always amazes us how many parts there are to the story and how one piece is related to another. We ourselves know the story of Rollo from the TV series Vikings. 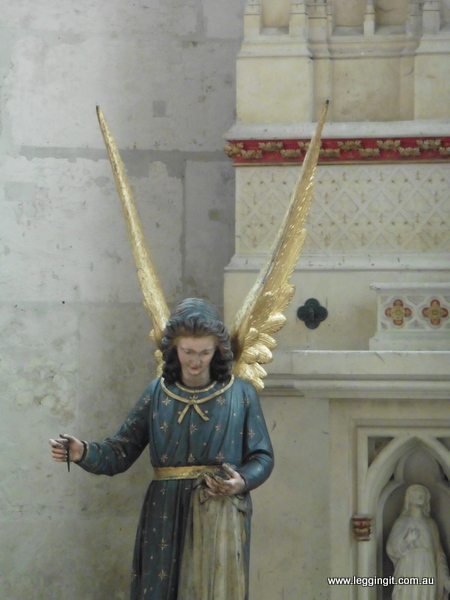 The Abbey of Saint-Ouen which is only a few blocks away also has a Rollo connection with a statue in the churchyard. Inside its quite a simple affair which gives it a reall sense of light and space with high gothic arches allowing light to fill the church. There was photo exhibition on exhibiting photos from China. It was a trip down memory lane looking at the people in different costumes from the different regions. 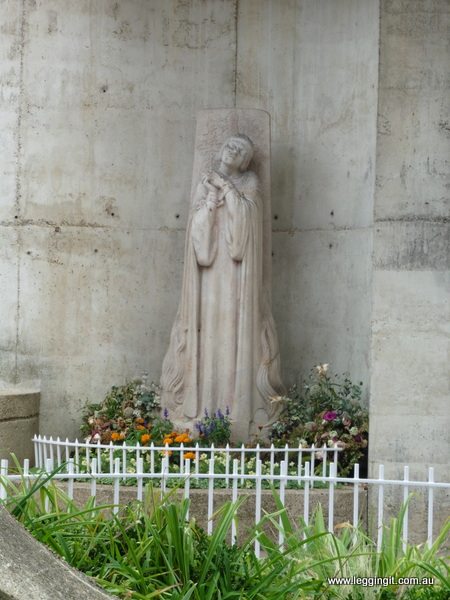 Another famous person connected with Rouen is Joan of Arc (Jean D’Arc). Nearby to the Cathedral Joan was imprisoned and tortured in the Donjon  (Joan of Arc Tower). The dungeon is all that remains of the original castle. Betrayed by the king of France, who stated that she was a witch who’d bewitched him.

In the market place a few blocks away Joan was burned at the stake. A statue, a high cross and an oddly shaped Saint Saviours church (whose roof is in the shape of a flame) mark the place where Joan met her fate. Strangely the area is still filled with medieval buildings and its easy imagine her being marched through the streets on the 30th of May 1431.

Nearby, above the archway the golden face of the Great clock overlooks the old marketplace. It dates from the 14th century and was supposedly in operation from installation until 1928 without stopping. The gothic belfry houses the city bells and the renaissance style archway really set it off as an object of beauty. 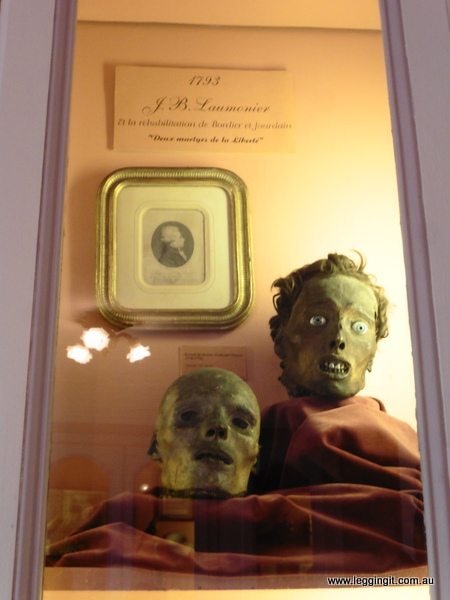 Another odd place we paid a visit to was the Flaubert Museum and Medical History Museum. All the museum displays are in French so we had to use an audioguide which was an extra 4 Euros on top of our 3 Euros each. It had some interesting exhibits including the six person bed, (which wasn’t unusual in the 1800’s), a few mummies, mummified heads, and anatomical birthing dummies made from cloth. Some of the exhibits seemed a bit ghoulish but they were used to gain a better understanding of how the body worked. There were also a room set up like an apothecary and a dentists surgery complete with treadle powered drill. Another room was set up with foundling material which was one of the hospitals other roles.
Outside the garden housed many of the plants and herbs which were used and continue to be used for medicine. 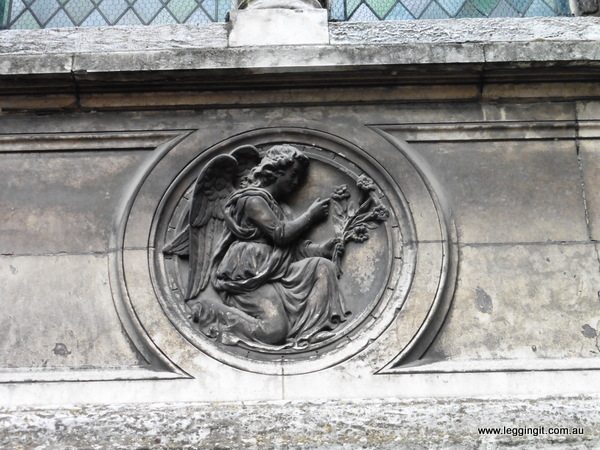 Heading back past the cathedral we found the Church of Saint-Maclou open and spent a few minutes listening to some beautiful organ music before the organist realised she’d left the door open and quickly rushed about saying “Ferme! Ferme!” and hurried everyone out. 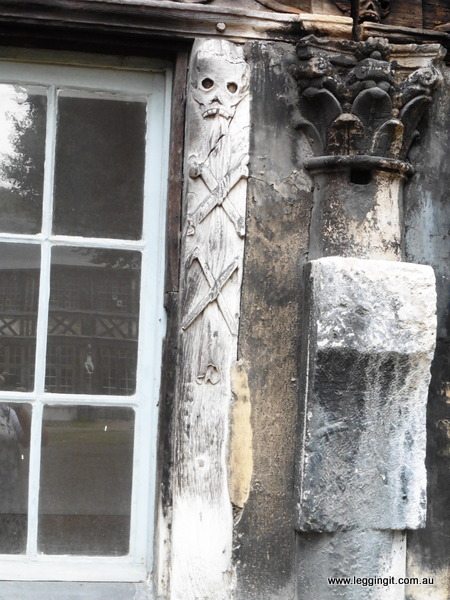 Just behind the Church of Saint-Maclou down a passageway lies the Aītre Saint-Maclou. It’s one of the last medieval necropolis’ and consists of a courtyard surrounded on all four sides by a medieval building. It was designed as a cemetery in the middle ages and during the plague of 1348 three quarters of the surrounding populous died and probably ended up there. As the cemetery became full the graves were dug up, (don’t worry the bodies had been buried with quicklime to speed up decomposition) the bones removed and stored in the attics which became ossuaries. In recent times the buildings have been used for more sedate purposes. The buildings have interesting motifs of skulls and death carved into the wooden beams.
As the weather was starting to close in we headed back to the hotel. Tomorrow we head to Paris to drop the bike off before heading to Prague.