The weather was pretty foggy as we headed into Zurich by tram  with our couchsurfing friend Karin and her daughter. Zurich has a 24 hour public transport pass which costs 8.50 Swiss Francs ($11.85) so we left the bike at home for something different.

Zurich has a great system of trolley buses and trams so with the 24 hour pass we decided to see as much of the city as possible using public transport.

Karin offered to show us around the city so we thought it’d be a great way to look around.

Along Bahnhofstrasse all of the designer shops you’ve ever heard of have taken up residence. It was along here that we found the best chocolate shops in the City,Spungli. As soon as we entered the shop we were instantly hungry despite eating breakfast not long before. It was just heaven but of course the prices were sky high too ,9.30 Francs ($.13 Aus) for 100gm block.

At parkplatz the weekly markets were on and it’s quite surprising to see markets in the centre of the city. In preparation for Christmas there were lots of wreaths and Christmas decorations. There were also lots of fruit and vegetables, cheeses, meats and farm goods. It was a nice little market. Michele noticed they had miniature kiwi fruit for sale and tried one…interesting you eat them peel and all and they taste like a cross between a kiwi fruit and feijoa.
We wandered past the Stork Hotel with its storks on the roof, visited the Fraumünster and Grössmunster, and took a look around some of the older parts of the city. The Fraumünster is quite beautiful in its simplicity which is reflective of the changes brought about by the Protestant movement in Zurich. The Grössmunster has some amazing stained glass windows and carved entry doors. It also has a fabulous carved stonework facade. The masons handiwork is also evident in the cloister area with fabulous designs, strange beasts and fabulous caricatures. 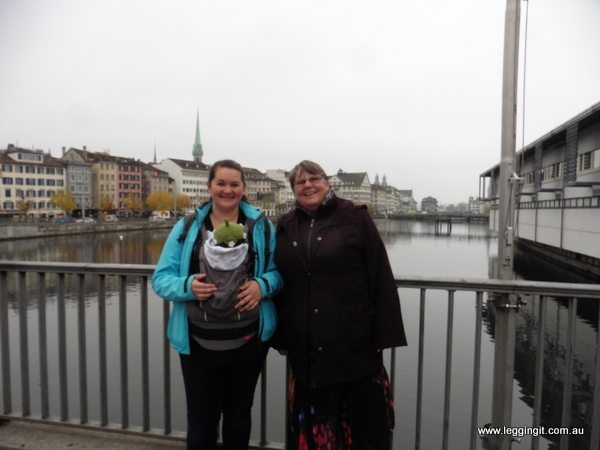 At midday we said goodbye to Karin and her baby. As she headed home we headed for the tram stop. One of the best ways we’ve found to explore a city is simply jump on public transport and go to the end of the line. We’ve done it in heaps of cities. 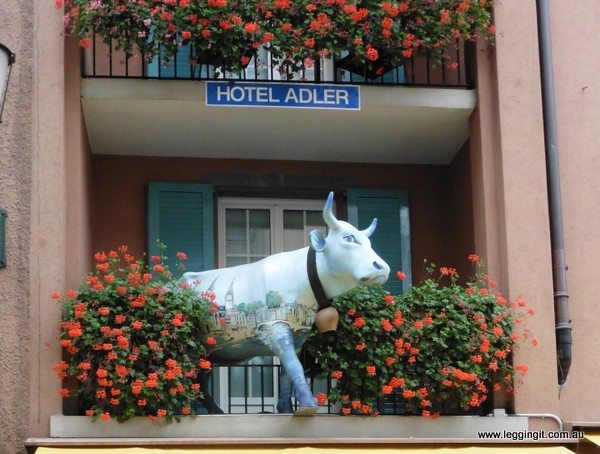 As the sun was going down we headed back to our friends apartment in the suburbs and quickly got lost, ending up in a forest. Another amazing thing about Zurich is how close to the countryside is the suburbs.

Michele was a little concerned but after a quick scout around we were soon heading in the right direction.
Tomorrow weather permitting we will join a walking tour of Zurich and explore more of the city .

2 thoughts on “Riding trams in Zurich”