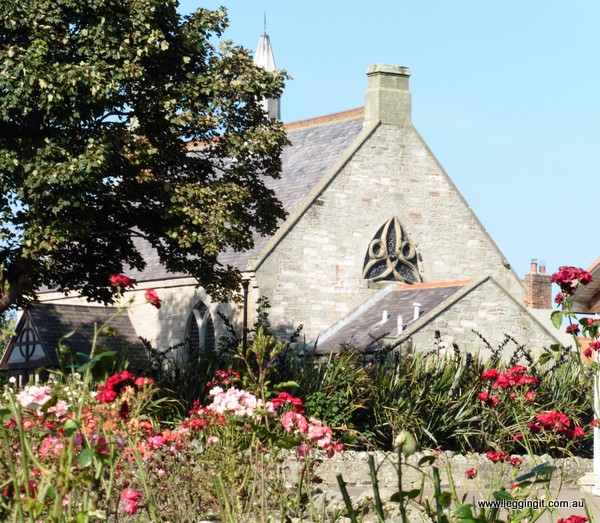 Not far south of Berwick Upon Tweed lies Lindisfarne, or the Holy Island as it’s also known. The first thing we checked before planning our visit was the tide tables. The reason we needed to check the tides was that Lindisfarne can be reached either by boat or by crossing the causeway. The causeway however is covered by the sea twice a day so if didn’t plan properly we could be stuck on the island for 7 hours waiting for the water to abate or even worse be underwater on the causeway and need snorkels in our helmets.

The Linisfarne website is pretty extensive with accommodation, travel info, tours, tide tables, activities, and everything that’s needed to plan a trip to the island.
The ride up the coast was really scenic but we had a timely reminder of the dangers of riding in the country. The high hedges which line the roads in Britain concealed a side road which was not signposted. As I was overtaking a truck another truck came from the side road. Luckily the road was clear ahead enough to complete the manoeuvre.

As we arrived at the turn off to the island we noticed a service station selling fuel and a big sign saying cash machine. Good to know as the island has limited facilities.

A steady stream of traffic in cars, on bikes and on foot greeted us as we rode onto the causeway. Water still lay about in patches and in a few spots we had to lift our feet to keep our boots dry or slow down so that oncoming traffic didn’t cover us in water. 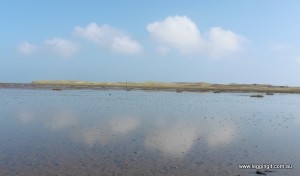 Tourist traffic is forbidden on the island so everyone has to park in the large main carpark and catch the shuttle. However the shuttle wasn’t running so we just parked the princess and joined the crowd wandering into town. The grey ghost was out checking parking tickets with his portable printer busily printing and attaching fines to vehicles.

The Priory unfortunately is run by English Heritage, another organisation so our National Trust membership was no good dammit. Our wallets a little lighter we checked out the museum which told the history of the island, the priory, the castle and important figures.

A quick history of the place goes something like this. From Iona came St Aidan who established a monastery and priory in 634. A modest church of wood with a thatched roof was built however St Bede didn’t think too much of it and soon a stone structure replaced it. Lindisfarne was quite significant at the time because it became the centre for evangelism. Another famous name from the period was St Cuthbert who was buried in the priory. The Vikings raided the priory and St Cuthbert was exhumed and whisked away by the monks to safety. Eventually Henry VIII did what the Vikings couldn’t do and shut the place down. The Priory fell into disrepair, the lead roof was removed and reused before the walls started collapsing. Some of the bricks and stones were reused building the castle while others were recycled by the locals.

These days there’s not much left. Some of the west wall of the priory was rebuilt in the late 1800’s when the significance of the place was recognised. The crumbling remains however give an indication of how massive the structure was back in its heyday. Out in the grounds a sculpture of St Cuthbert looks over the bus loads of tourists filing through the ruins.

Next to the priory St Mary’s Parish Church contains a statue of St Cuthbert being carried by monks. There’s also some copies of the Lindisfarne Gospels (similar to the Book of Kells) the original is in the British Museum in London. The gospels were made and illustrated on the island in honour of St Cuthbert. It also had some beautiful WWI Displays.

On leaving the church there was a little display of birds of prey, the owls were beautiful.

As the time was getting on we decided to “up stumps” and return to the carpark, picking up some local farm produce along the way.
There were signs along the road with pictures of 4WD half submerged on the causeway reminding everyone not to proceed if the water was up to the causeway. Every month the occupants of 1 vehicle has to be rescued which is quite amazing and quite expensive.

We left before the rush as the grey ghost circled the carpark printing fines and pushing them under windscreen wipers.

Our next destination was Chillingham Castle, Britain’s most haunted castle. The ride in was beautiful passing through small villages, farmland and fields surrounded by forested hills in the distance. Partridges, and pheasants flew up from the roadside as we rode along through the hedge lined fields. To add to the country feel John Deere tractors dragged farm carts and hay rakes up the narrow country roads making the most of the good weather. “Making hay while the sun shines”.
Later as we were cornering we struck a patch of oil most probably dropped by a farm tractor. The bike stepped out a bit but we stayed upright and continued on our way. Soon we were riding into Chillingham village, and as we passed the sign it reminded me of home.

One thought on “Lindisfarne (Holy Island)”