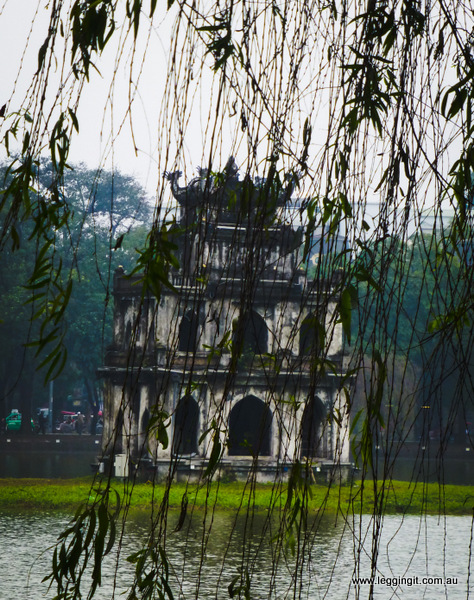 After a shower we slipped down for breakfast, bread, baguettes, jams, cheese, tomatoes, ham, meats, fresh fruit, coffee and omelettes, all we could eat for just $3. Tomorrow breakfast is priced into the $28 a night room price.

We face timed our family after breakfast showing them our beautiful room, and out the window at the surrounding area. It’s true Asian style with buildings of different size and built at different times, so a real jumble. We then used the lonely planet self guided walking tour and from the hotel walked down to Hang Dau street full of shoe stores which racks of shoes spilling out onto the street. Further on the at the corner near the lake we had a quick look at the Martyrs monument were we dodged the scrum of cyclo drivers chasing a rich westerner. We took our chances crossing the road at the pedestrian crossing, don’t worry if there’s vehicles coming just step off he gutter and they’ll dodge around you. Back in the day we used to call it parachuting. Its just like stepping out of a nice safe aircraft and then hoping that your chute opens.

As you can probably tell we survived the experience, as the traffic isn’t as bad as Ho Chi Minh City. Dodging he ladies selling pop up scene cards and the bloke selling annoying noise makers we paid our entry fee of 15,000 VND each crossed the red Huc bridge and entered the Ngoc Son Temple, which is the most visited temple in Hanoi. The temple pays homage to Tran Hung Dao, the supreme commander during the Tran dynasty of the 13th century, who repelled three Mongol invasions by Kublai Khan. He and his army was obviously the wrong bunch to mess with, as he was a brilliant strategist, who was inventive and his troops although mere peasants were fiercely dedicated to him. There’s also a huge turtle stuffed inside a glass case,  weighing a whopping 250kgs

We walked around Hoan Kiem lake spotting a huge statue across the road to Ly Thai To dressed in scholarly robes. Ly Thai To was the first king of the Ly dynasty who had their capital very close to Hanoi at Thang Long. They also introduced Buddhism as the state religion and built over 150 monasteries around Hanoi.

We tried to get a decent photo of the three storey Turtle tower which is situated on a tiny island in the middle of the lake but with the overcast skies the light was all wrong. There are tales of turtles up to 250 kgs still living in the lake, one monster being removed recently because it was sick, but we think its a bit like the Loch Ness monster something to keep the tourists thinking.

A temple just across the road from the lake  pays homage to Le Thai To or as he was known in life, Le Loi.(also the name of one of the main streets in HCMC) He was a freedom fighter from the early 15th century raising an army defeating the occupying army of the Chinese Ming Dynasty and reclaiming Vietnam.  Lê Lợi’ possessed a magic sword which gave him the strength of many men. He received the sword inscribed with the words “the will of Heaven” from the demigod the Golden Turtle. There’s also a story which relates to the lake. One day, not long after the Chinese had accepted Vietnam as independent, Lê Lợi was out boating on a lake in Hanoi. Suddenly a large turtle surfaced, took the sword from Lê Lợi’s belt, and dived back into the depths. Efforts were made to find both the sword and the turtle but without success. Lê Lợi then acknowledged the sword had gone back to the Golden Turtle and caused the lake to be renamed ‘The Lake of the Returned Sword’ (Hoan Kiem Lake) located in present-day Hanoi.

We stopped for a coffee overlooking the lake and met a nice couple from England who were enjoying Hanoi after meeting up with family, living in Australia for a joint holiday. They are off to Siem Reap soon, hopefully the crowds will be smaller so areas will be more accessible.

We wandered around unsuccessfully trying to find the Water Puppet Show which was incorrectly marked on both our maps before continuing on to the next stop on the walking guide. We headed back up shoe street before turning into a street that specialises in headstones with pictures on them. Including one of the old lady selling the headstones, which is a little bit creepy. We stopped at an old original house but as we’d been to so many before decided to carry on. Many years ago houses were taxed on their road frontage, much like the window taxes in England many moons ago, to minimise taxes tube houses were built. Tube houses are really long but skinny frontages and only two storeys high as houses weren’t allowed to be higher than the royal palace. We wandered through skinny alleys, with all sorts of shops from old Russian watches, T-shirts, backpacks, ripoff North face gear and a few restaurants.

As it was close to lunch time so we stopped at the Old Hanoi Restaurant. It was a nice little family restaurant, with an old traditional feel about it. We ordered caramelised Chicken and ginger with rice paper. So some roll your owns. They served a wicked chicken with lettuce leaves, basil, cucumber, tomato, pineapple, and a heap of thin rectangular rice paper sheets. We didn’t have to wet these ones like other rice paper sheets to make them pliable, just roll,  dip and eat. It was a really good meal. The chicken was sooooo flavoursome and its was fun rolling spring rolls.
We looked over all of our information and decided to have another look for the water puppets which we finally found on P Dinh Tien Hoang just north of So Lau where the Lonely Planet said it was. There were heaps of 1 hour shows for sale so we booked in for the 5.20pm show and scored two seats 4rows from the front, for 100,000 VND each. They also wanted 20,000 VND Or 30,000 VND to video the show, but we weren’t stupid enough to pay that.

Vietnamese water puppetry originated a thousand years ago during the Ly dynasty. Villagers in the Red River delta and other rice-growing regions in Northern Vietnam staged water puppet performances to celebrate the end of the rice harvest, religious festivals, and other important occasions.
The original water puppet festivals were held inside a rice paddy, with a pagoda built on top to hide the puppeteers who stand in the waist-deep water.  The shows represent daily life on the farm, historic events and legends.

Each water puppet is hand-carved and given five layers of lacquer paint to protect the puppets from the water and to add vital colors to the performance. The show is accompanied by singers and traditional musicians playing drums, percussion instruments, all sorts of string instruments from vietnamese banjos and violins, to a Dan Bau and a sixteen string Dan Tranh, which give that uniquely Asian sound to the music. It was a great show with beautiful music, wonderful water puppets, and great stories, some even so funny that the kids were laughing so hard we all started laughing at them.

After the show we wandered around the Old Quarter, which is the area we are staying, just checking the place out, discovering more guest houses, backpacker hostels, and restaurants.

Dinner was at a nice looking traditional style restaurant, with the wait staff in traditional peasant costume. We ordered Prawn and Mango Spring Rolls and Pho Cuon Thit Bo (Beef Spring Rolls wrapped in Noodles).The spring rolls were really nice but not very filling so I ordered Beef with stirfry rice noodles, which hit the spot. We were amazed at one of the dishes at another table. A hollowed out pineapple with holes in the side of it, a tea light candle burning inside and spring rolls hanging off toothpicks around the outside of it. It was really cool.
The only downside was the restaurant stuffing up and trying to add another meal onto our bill.