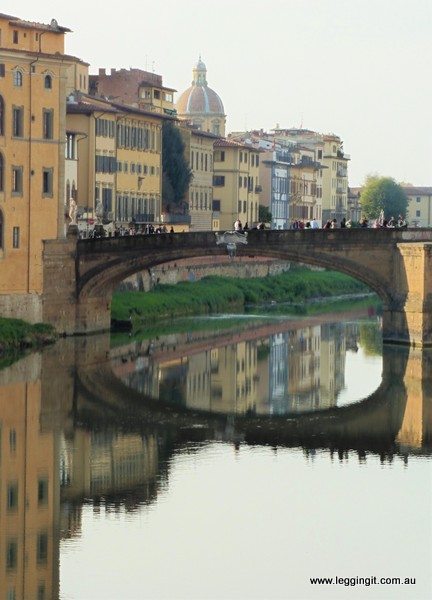 Today we were heading to Florence, luckily it was close as it was a slow start this morning. We said goodbye to our hosts who were off to continue the olive harvest quite early, meanwhile we dawdled a bit having a few cups of coffee whilst slowly packing. Michele and I are different characters I like to get up, pack and get going but she’s a little slower as she has to check her messages, have a coffee then have breakfast then pack. Maybe it’s a reflection of different work patterns I was always up at six whilst she started at nine. Even though we only had less than 100 km’s to go its hard to sit around and wait, but that’s my problem.
Just after 9 we hit the road, well it was a gravel track actually and of course as we were going down the hill someone was coming up so we pulled off to let them pass. Once past them we were soon onto the concrete one lane track and transiting down through the lanes of the village. Of course there was traffic so we once again had to pull over (the great thing about one vehicle lanes).
Soon we were out of the village and heading towards Florence. Unfortunately with all the olives being picked, it’s a time when the trees are pruned and the cuttings burnt so the air was thick with smoke.
Unlike our transit through the mountains on the coast the run down was just straight highway riding so just park the brain and wake up when you get there.

Arriving in Florence we missed the hotel and drove a few km’s up the road before realising our mistake and retracing our route. After check in we dropped our bags off and headed into Florence. 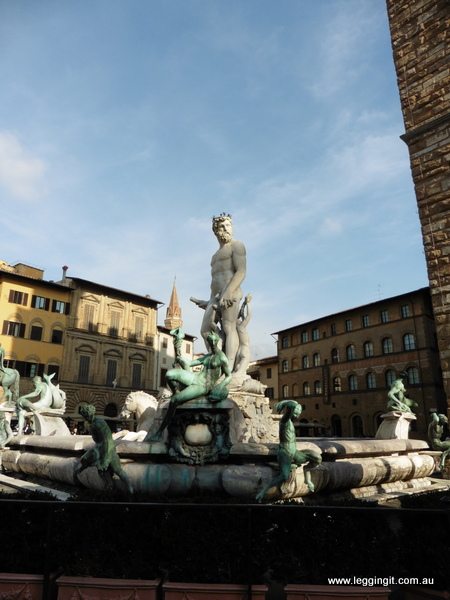 I dunno what you’ve heard about Florence but to describe it, back in the the renaissance period a whole heap of merchants in Florence became extremely rich and built huge houses, well actually palaces. It was like the whole Christmas lights contest we see today where neighbours outdo each other. In Florence it wasn’t keeping up with the Jones’ but keeping up with the Vecchio’s.
The result is today an amazing city full of wonderful buildings with lots of pedestrian areas. 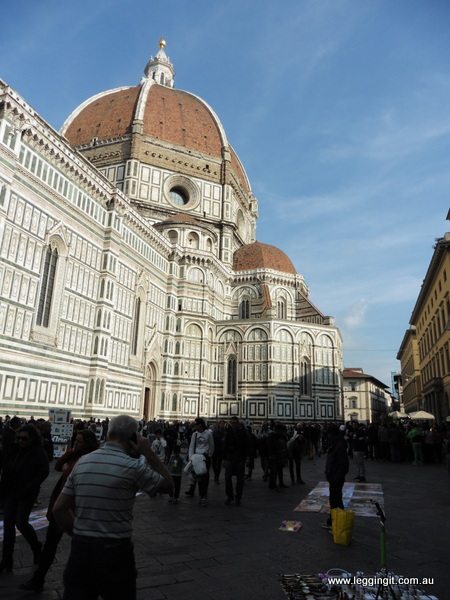 As a change we decided to use Rick Steins app for Florence (Firenza). Our friends Gerry and Deb had put us onto him so we thought we’d try something different so with Rick Stein calling the shots we navigated our way around the city. Our first stop was the Cattedrale di Santa Maria del Fiore or as it’s also known “the Duomo”. When we arrived there was a mixture of legitimate artists and hawkers along with a heap of Africans and others who may not have been entirely legit. All their paintings and sale goods were spread out on the pavement as they tried to entice people to buy. Suddenly word spread that the police were walking towards them and quick as a flash the hawkers had gathered up all their goods and were walking off down a side alley. Pretty soon the police had conducted their sweep and the “all clear” passed around and all the hawkers returned. It was hilarious watching the whole show. 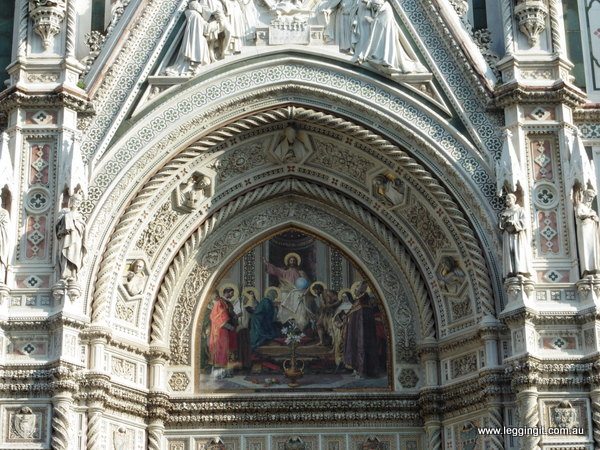 The Duomo is a fantastic cathedral built from red and white marble. Unlike the cathedrals made from limestone this cathedral really shines. Inside the cathedral the floor is a mixture of red white and black marble cut into designs. Some of the wooden seats were absolutely high quality with different types of wood inlaid to create pictures. The stained glass of course was magnificent. The whole interior was tremendous. 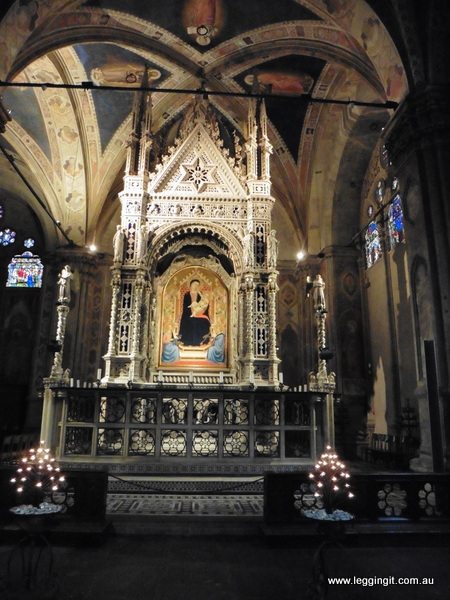 Wandering down Via del Calzalouli our next stop was Orsam-Michele. It started out as a chapel with a granary attached but as the population increased the granary was converted. Inside it’s a fabulous contrast to all the cathedrals we’ve seen. All the walls, pillars and ceiling are painted with saints, popes, and priests. It’s all a bit aged which really adds to the charm of the chapel. An elaborately carved altarpiece on one side and a carved marble statue of the Madonna and child just finish it off. 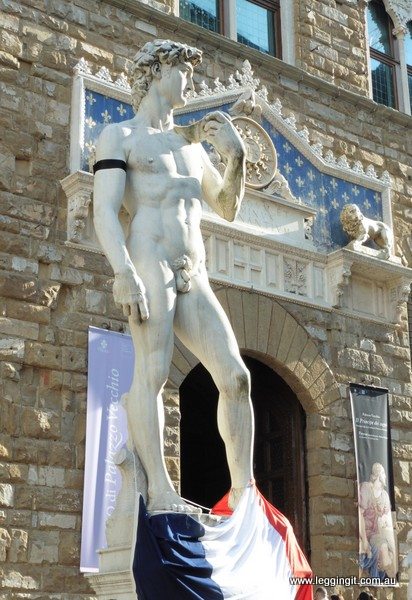 We took a detour to Palazzio Vecchio, an ornate renaissance palace surrounded by statues. In tribute to the people who’d been killed in Paris last night their statue of David had a black armband and was draped in a French Flag. 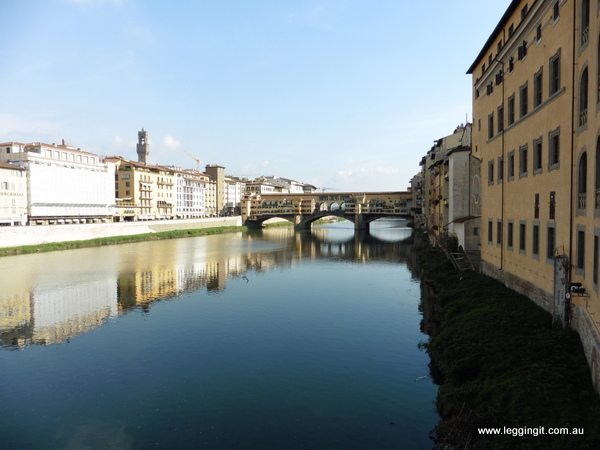 As it was close to lunchtime we started checking prices, whoa around Palazzio Vecchio it was a little pricey. So we continued on to Ponte Vecchio the old bridge lined with houses and shops. It’s a real blast
Continuing up Piazza Pitti we passed the massive Palazzo Pitti and found a nice restaurant for lunch. Lasagne, insalata mixta, roast beef and a beautiful dish of roasted vegetables, and a really nice Tiramisu, well Trattoria La Mangiatoia turned out to be a real find.
Our last stop was the Greek Orthodox Church of Saint Jacob a mixture of 11th century Romanesque and 18 century Baroque. Adorned with baroque art and religious art from various centuries it was reminiscent of some of the orthodox churches we visited in Russia.
As it was getting late we headed back to the bike and made our way back to the hotel. Tomorrow we head to the “City of Love” Venice 🙂