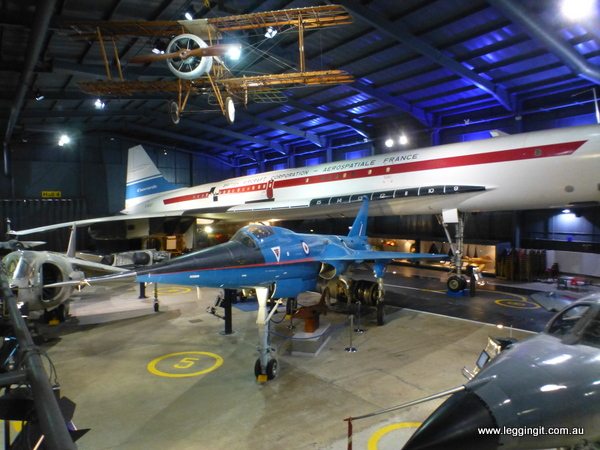 Today the weather was perfect for a trip to the Fleet Air Arm Museum in Yeovilton. After postponing my visit due to a key malfunction on the top box a few days ago, today there was no stopping as I headed through Bath. Luckily being on the bike I could cut through the traffic and get ahead of it. Even so I still spent the best part of 30 minutes getting across Bath. 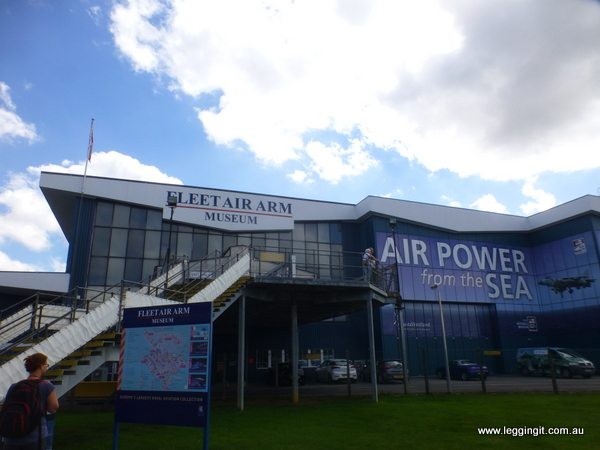 The Fleet Air Arm Museum starts its exhibit with the Royal Navy’s Airship and the origins of the Royal Naval Air Service prior to WW1. There’s the story of the first flight of a Short S 27 off a ship and a display in the first hall.
For junior pilots some interactive displays demonstrate how flight and various parts of the aircraft work with clever models inside wind tunnels.
Within the hall are a few seaplanes including a Short with floats and a Walrus seaplane. 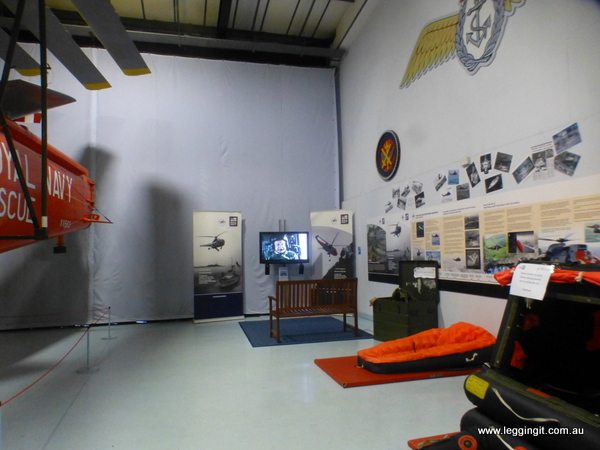 Also in the hall is an interesting exhibit on 100 years of search and rescue. The workhorse of the current search and rescue, a big yellow Sea King is on display. A video of the 1979 Fastnet Yacht race told the story of one of the sailors rescued during the race. The 30 foot fibreglass yacht Grimalkin was smashed by gigantic seas, capsized and dismasted. The crew which were attached to lifelines were washed overboard but the skipper was never seen again.

Three of the crew launched and made it into the life-raft but two were left behind trapped in the rigging of the capsized yacht believed dead. However this wasn’t the case. In fact one was on deaths doorstep and the other unconscious. The unconscious sailor became conscious with his head banging against the hull. He was able to drag his crewmate into the cockpit where he uttered his last goodbyes and died. All alone he bailed the yacht out for 8 hours before a helicopter rescued him in another story of great heroism. It was a terrible story but reinforced the importance of the job the Royal Navy do.

By the end the 1979 Fastnet race, 15 people were dead, five yachts had sunk, 24 crews had abandoned ship and 136 sailors had been rescued. Of the 303 boats which entered the race only 85 managed to complete the race. 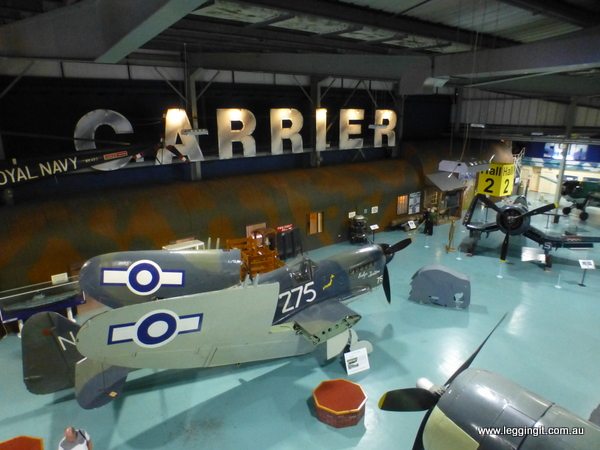 Entering the second hall the fleet air arm story continued with exhibits about the Second World War and some of the associated aircraft which were involved. In the Battle for the Atlantic section there’s a mock up of a submarine from up in the ceiling a Swordfish sweeps down loosing a torpedo.

A small section on the Women’s RN Service included a diorama of some of the jobs that the WRENS were involved in during the war.

There were also exhibits on the RN’s involvement in the Pacific War and in Korea.

Obviously some of the young pilots are not ready for the Royal Navy. At the end of the floor an Airfield Viewing Area had great views out over the parked up aircraft which included some of the Royal Navy’s Wildcat helicopters. 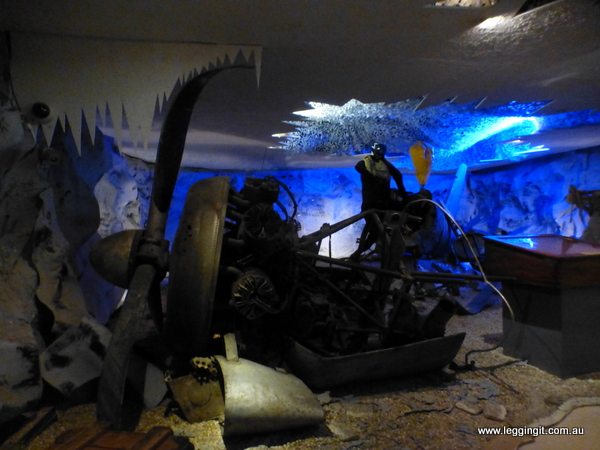 Also in the upper gallery is the exhibition named Operation Skua. An under ice mock up with video tells the story of a Royal Navy Blackburn Skua which made a forced landing on a frozen Norwegian lake after being shot down by a Heinkel. The exhibition tells the story of recovery of the aircraft from the bottom of the lake in 1974.
Around the hall are various famous Royal Navy aircraft such as Albacore, Firefly, Fulmar, Harvard, Hellcat, Seafire, Sea Fury, Avenger, Martlet, and a Corsair. Theres also a MiG 15 the iconic Russian jet fighter which looks a little out of place. 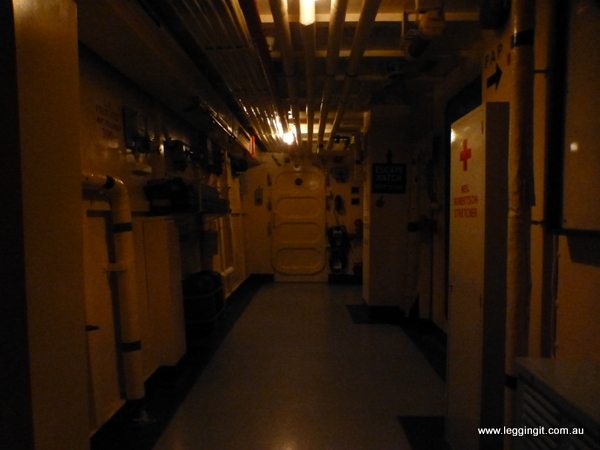 After a short introduction video we embarked on a Westland Wessex for a short (simulated) flight to the carrier.

Once the Wessex lands, the door opens on the flight deck of the Royal Navy Carrier. In front of us were some of the most iconic aircraft of the Fleet Air Arm, Phantom, Buccaneer, Gannet, Scimitar, Sea Vixen, Attacker, Sea Vampire, all lined up ready to fly off. On the screens on either end of the hall computer generated planes landed and took off. As we were directed into the Carriers island it was like stepping inside the real thing with rooms decked out like ships compartments. In each compartment monitors told the story before directing us to the next compartment. 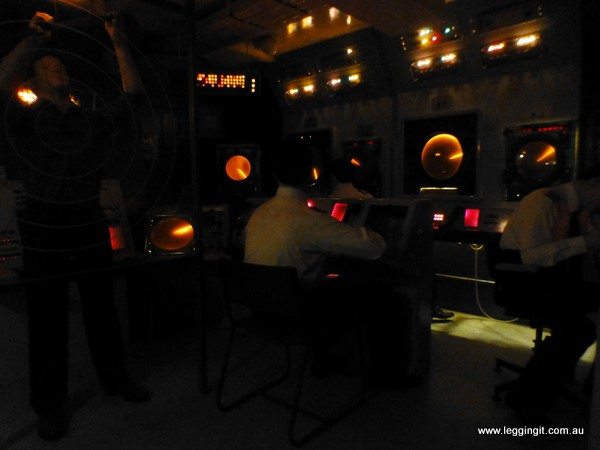 There was a mock up operations room, flight control, and bridge, along with lots of other specialist ships compartments. It was like being back at sea. Another mock up with video simulating the carriers aircraft lift took us down to the display about the Navy’s future F35 Lightning aircraft and Queen Elizabeth class aircraft carrier. 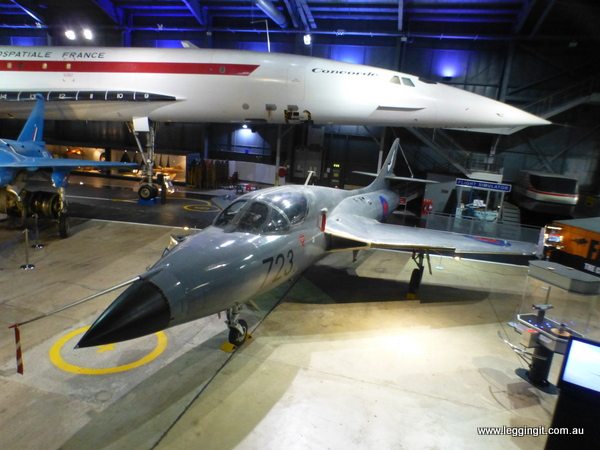 In the last hall the most striking aircraft was the first British built Concorde. The massive airliner dwarfs all the other aircraft within the hall.

Within the hall there’s also two delta wing test aircraft which led to the development of the Concorde. There’s a few other aircraft including a Hunter, a Sea Harrier and the Royal Navy’s most versatile workhorse the Sea King in utility mode.

In a corner which seemed a little out of the way is an exhibition on the Falklands Conflict. (Even the name seems a bit sanitised). A video played some of the footage whilst around the exhibit various parts of the story were story. One of the most interesting items was the admirals table on the flagship. During the different attacks by Argentine aircraft personnel sheltered under it and left messages written in pen. They probably never expected that the messages would ever be seen. When the table was removed for refurbishment the messages were discovered.

After about three hours wandering around the museum it was time to head back to Bath. It was a big day with so much to see in the museum. Personally I think the Fleet Air Arm Museum is worth a full day to visit as there are so many exhibits throughout.

The run back to Bath didn’t take quite as long however it was still horrendous trying to cross the city.

Tomorrow we’re heading to Bradford on Avon to hopefully find a tailor to repair the zip on my motorcycle jacket which died yesterday. It’ll also give us a chance to check out the lovely little town. We’ve passed through it a number of times and stopped off at the canal for a look. Tomorrow we’ll get out on foot.