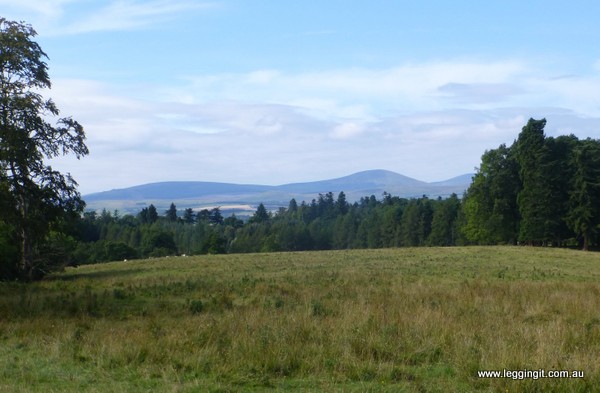 Our housesit was up in Dunbar and we were heading down to Morpeth in Northumberland to housesit for a few days . As the trip was only just over 100 kms, we decided to take a break in Chillingham after hearing about the wild cattle. Chillingham is situated not far south of Berwick upon Tweed and the drive in is quite beautiful passing through farming country and little villages set amongst rolling hills.

The Chillingham wild cattle are just that, wild cattle. 800 years ago the owner of Chillingham Castle and estate built a stone wall around his property. Inside his property wild boars, deer and cattle roamed the forests so he and friends could hunt them. The cattle inside his property were the original cattle which domestic varieties descended from although they are now not genetically related at all. However these cattle weren’t raised to provide milk and they were never domesticated. They were sport for hunters, often giving as good as they got goring dogs, horses and people. 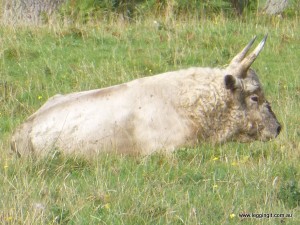 Isolated from the rest of the world only the strongest survived. Today with a herd of over 100 it’s hard to imagine that in 1947 after the harshest winters on record only 5 bulls and 4 cows remained. Today the herd looks in outstanding shape with Snow White bodies and long curved horns.

The game warden told us how the bulls fight to mate with the cows. One bull was nursing the wounds of an unsuccessful battle for love with gore marks on his chest. 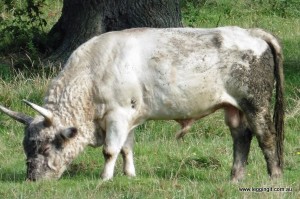 A truck driving through the forest high on the hill was making lots of noise. The herd reacted immediately and it was interesting watching the reactions of the herd it reminded me of wild buffalo ready for fight or flight.

The game warden treated the cattle with utmost respect watching for any movements, and keeping us at a safe distance. We learned lots of amazing facts about the cattle and how they differ from the domestic breeds. It was a really interesting tour.

By the time we left it was lunchtime but we were due to meet our new host at 3om so we decided to go straight there then catch some lunch after she left. We arrived a the address and no one was home so we decided to get lunch and dined in a lovely tea room. The cakes were too much to resist so we had one each as well.

It was then we realised we actually had been to the wrong house so now with the correct address I the satnav we rode the final 650 meters and met our host and her lovely cat Daisy.

We will be in Morpeth for four nights and hope to explore the area.

One thought on “Chillingham Wild Cattle”