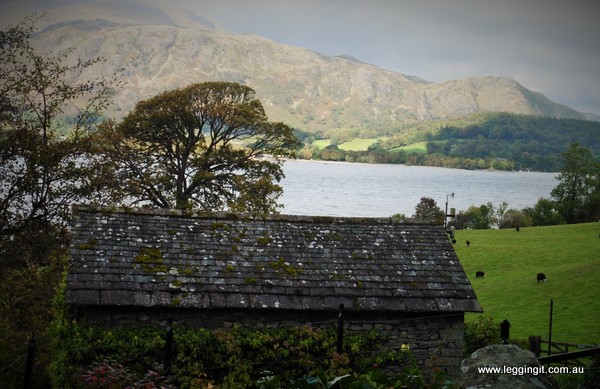 One of the reasons for coming to the area was Michele’ love of Beatrix Potter books when she was a child. Previously we have visited the Beatrix Potter Garden in Dunkeld and knowing her love of this area we were looking forward to exploring more of the places who influenced her stories.

Our host had laid out breakfast and there was so much choice nobody could go hungry, we enjoyed it while watching the birds visiting the bird feeeder outside the window.

We then took a ride over to Coniston. The ride took us through Whitbeck, Whicham, along the A595 which was pretty good with heaps of bends, lots of long straights, a few hills and good road conditions. When we reached Broughton-in-Furness we turned off onto the A593, a much smaller road with lots of blind corners, not much room to pass and lots of loose material on the road. We dropped it back a gear and just took it steady just enjoying the ride through the rolling hills and woods.

We parked up at the motorcycle parking near the Bluebird Cafe, which has the reputation of being the best cafe around with great views overlooking the lake.

Coniston Water is famous for being the place where Sir Malcolm Campbell and his son Donald Campbell successfully set world speed records. Donald Campbell was a multiple world speed record holder and still is the only person to set a world land and water speed record in the same year. Unfortunately he came to grief on Coniston Water in 1964 when Bluebird flipped at about 300 mph and despite extensive searches by Royal Navy Divers his body wasn’t found until 2001 when his boat the Bluebird was recovered. He was buried in a simple grave in the local cemetery although his wishes were that should anything happen skipper and boat should stay together.

Donald Campbell holds a special place in Australia as it was on Lake Dumbleyung that he set his world water speed record of 276.33 mph (444.71 km/h) in Bluebird C7 and on Lake Eyre he set his Land Speed Record of 403.10 mph (648.73 km/h) in Bluebird CN7. Currently Project Bluebird is repairing C7 with the intention of doing a low speed trial before she is retired to a purpose built wing at the Ruskin Museum at Coniston. If you want to learn about The K7 Bluebird Project or get involved check out their website here 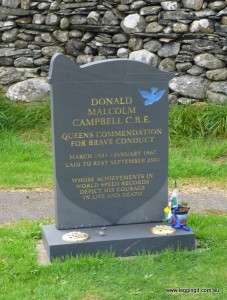 We decided to took a trip on the lake on the S Y Gondola a beautiful restored Victorian era steam yacht. It was interesting hearing the local history of the lake, the yacht and looking through the old photo albums at her history. She was launched in 1859 and served as a ferry on Coniston Waters until 1936 before being sold as a houseboat. By the 1960’s she was derelict after being blown ashore in a gale. The council became keen to dismantle it but a group of enthusiasts dug a channel and pushed her back into the water where she remained submerged until enough funds were raised for her restoration.

Vickers shipyards surveyed and replaced the entire hull using the old hull as a template. The rebuild became an apprentice project with three sections being rebuilt separately before being assembled lakeside at Coniston. These days it’s a beautifully finished boat with plush furnishings, brass fittings and a super quiet boiler that pushes her along at a lazy 10 knots. Unlike modern ferries it is so quiet that you can’t really hear the noise of the boiler.

As it was lunch time we decided to stop at Brantwood which was on the other side of the lake. Brantwood is the former home, now museum ofJohn Ruskin writer, art critic, draughtsman, watercolourist, social thinker, philanthropist who also established drawing schools. On reading about him later he truly was an odd man there is a movie just released on his life called Effie Gray not sure we will be lining up to see it though.

We were a little pressed for time so we skipped the museum and enjoyed lunch overlooking the gardens. The simple lunch of soup and sandwiches took about 50 minutes to arrive so we missed the ferry, the next one not due for another two hours so we were seething. We tired to walk around the lake a bit but there were gates blocking every access so instead of waiting for the SY Gondola we caught the Coniston ferry back. The fare was quite reasonable and they had a commentary which was pretty informative. 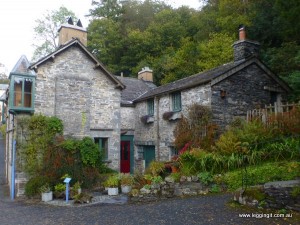 The ride over to Hawkshead to check out the Beatrix Potter gallery was pretty cool. The B5285 has some nice twisters up through the forests and up over Hawkshead Hill and on the way down it winds through picturesque old houses and farm buildings.
Hawkshead should be renamed “no free parking ville” as all the streets have no parking and the only parking to be had is two paid car parks. In an effort to squeeze every dollar out of the tourists even public toilets aren’t free, so much for small town friendliness.

The Beatrix Potter Gallery is set in the building that Beatrix’s husband worked in. They have an amazing array of bits and pieces including a wooden box with her specimen collection that is digitally recorded so you can look through all the drawers. Their collection includes most of her original artworks so every year they have a different themes this year it was her holidays. She truly was an amazing artist, her watercolours were so life like it was like seeing photos. Michele spent nearly an hour wandering through the very well set up museum, they even had reading areas both for adults and children which added to the atmosphere. Seeing the scenery it is easy to see how this area inspired such beautiful art. Well worth a visit if you are in the area.

After a cuppa tea and cake at the Guide Hall where they were having a fundraiser, we rode down to Windermere to have a look around before we retraced our route and rode up to Ambleside on the B5286. The road was pretty slim with high stone walls either side and took us through lots of woods and farmlands. With a name like Ambleside we expected a tiny sleepy village, but wow were we surprised. It’s a bustling tourist town which runs down to Lake Windermere. In the centre there’s lots of old architecture but it’s one way streets, heaps of cars and there’s so many tourists so it was only worth a quick look around.

As the day was getting on we decided not to stop heading back via Windermere, Newby Bridge, Grizebeck before we reached Broughton-in-Furness and picked up the A595 again. Michael and Joan had prepared another stunning dinner which we shared whilst talking with the hosts and other guests.

Tomorrow we may check out some local standing stones.