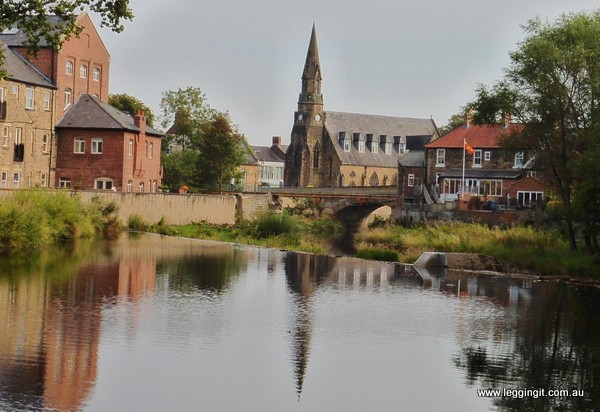 We had a housesit for 3 days in Morpeth in Northumberland so we headed down from Dunbar. The weather in the ride down was magnificent so we decided to take a detour through Chillingham to check out the Wild cattle and also Chillingham Castle, Britains most haunted castle.

We missed the turn off and ended up on a single lane road which wound through some spectacular scenery of rolling hills, forests and farmland. Along the way we startled a large flock of partridges who weren’t sure whether to run or fly so did both. Eventually our way was blocked by a gate so we switched on the satnav and found we were no where near our destination so did a uturn and quickly retraced our route to the main road.

The road down to Chillingham was pretty windy with heaps of corners and by the time we hit the little village it had petered out to a very minor road. The visit to the Chillingham Wild Cattle was awesome and surprisingly we both loved it. We wrote a little bit about our visit here

As the day was getting late and we were pressed for time we decided to check out the Haunted castle tomorrow and headed off to Morpeth. The B road from Chillingham was pretty rough and soon turned onto a one lane road. It was a nice ride including passing through a ford on the river, where we both lifted our feet to keep dry.

When we arrived in Morpeth we decided to check out the Chantry Tea Rooms. The food was wonderful and we noticed that they had cherry and almond scones on the board. As we’d never tried them before we ordered some. Wow, why hadn’t we tried them before.

The next day we spent walking around Morpeth using the map from the information centre. As we were already on the other side of the river we decided to do the walk in reverse starting from the old courthouse, past the castle and William Turner Gardens in Carlisle park.

William Turner was a well known physician and natural historian in his time recording the uses of different herbal remedies and the garden reflects this with different signs of description and the uses which he had written.

A river runs through the town and the walk took us for a lovely walk along the bank, and up to the steppy stones across the river to the old bakehouse. It’s said that you’re not a true Morpethian local until you’ve fallen into the river crossing the steppy stones. Another famous local is Lord Collingwood who was Admiral Nelsons second in command, taking over when Nelson was killed at Trafalgar. His house is still there which he named the “poopdeck” of course and his yard the “quarterdeck”. Its said that he loved walking the hills around Morpeth.

The walk continued on through the town passing the clock tower, the old bakehouse including the bakehouse tearooms. What a wonderful place to stop. As we passed we spotted the menu so after visiting the Millenium gardens we had to pop in for lunch.

The service was really good and we enjoyed a simple meal of Cumberland sausage and veges which was delicious. Restarting our tour we visited St James the great church where some local cosplayers were conducting a photoshoot, then back to the market square before checking out the two bridges, the Anglican Church and finally the Morpeth Bagpipe Museum. The museum is housed in the top floor of the Chantry and contains history of various forms of Bagpipes, from the Scottish ones which we know of today, to Irish, French, and Northumberland Small pipes. The museum was fascinating and we were very lucky to hear some Northumberland Small Pipes in acton when we visited Cragside.

Also whilst in Morpeth we visited St Mary’s Church. The church was built around the 12th century and it has a large cemetery attached and also a watch house. The church warden lived in the watch house and carried a rifle to deter grave robbers who were able to sell a body to universities and labs for £15 (quite a nice earn if you don’t mind digging up dead bodies and being shot at occasionally)

St Mary’s also recognises the role of women within the church with various stained glass windows and stories on the walls. A memorial to Emily Davison, an important figure in the suffragette movement (women’s right to vote) is in the church. Emily was passionate about getting the vote for women. She was arrested numerous times and also force-fed while on hunger strikes. She died whilst trying to attach suffragette colours to the Kings horse at Epsom Derby in 1913. She is well remembered by women’s groups in England and there are recent commemorations scattered around her grave. An inspiring woman who made such positive change to the world.