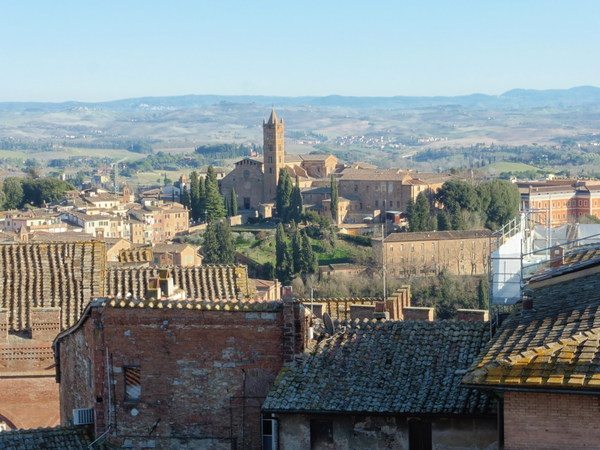 After a wet and windy day yesterday, we awoke to bright sunshine, giving us more reason to look forward to our day in Siena. 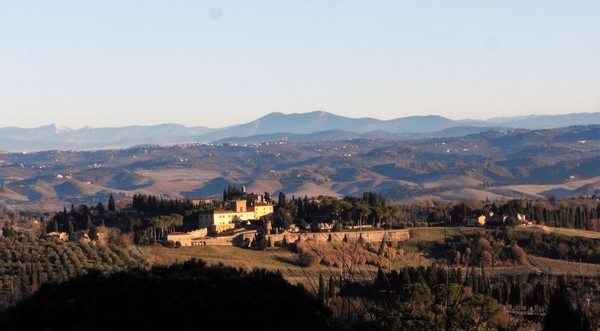 Michele was so excited she had to drag me out of bed to show me the change in the view. With the bright sunshine the whole landscape had come alive. After breakfast we took a trip into Siena. The route took us through a few of the fortified towns which are a feature of this part of Tuscany. It was pretty chilly and wherever the sun hadn’t touched was covered in thick frost. The ride took us past lots of old stone brick buildings surrounded by vineyards and olive groves. 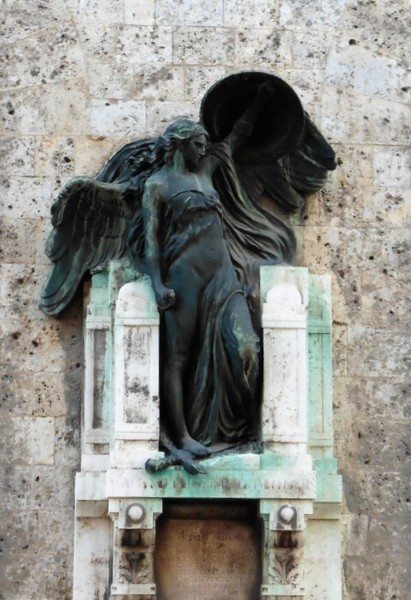 Arriving in Siena the road wound this way and that past all the tourist parking. As it got close to the centre it did a slow lap around the old fortifications. Eventually we got close to the centre and found a bike park. Our first stop was coffee at a small locals cafe where we watched the hustle and bustle of the city. After being in smaller provincial towns and cities Siena is quite busy.

It’s quite a fascinating place with all the old buildings, and we instantly felt like we were transported back in time.
The city of Siena dates back to the Etruscans who lived in the area. They were defeated and absorbed into the Roman Empire after the Roman-Etruscan war of 300 BC. It’s from the Etruscans that we get the name Tuscany. 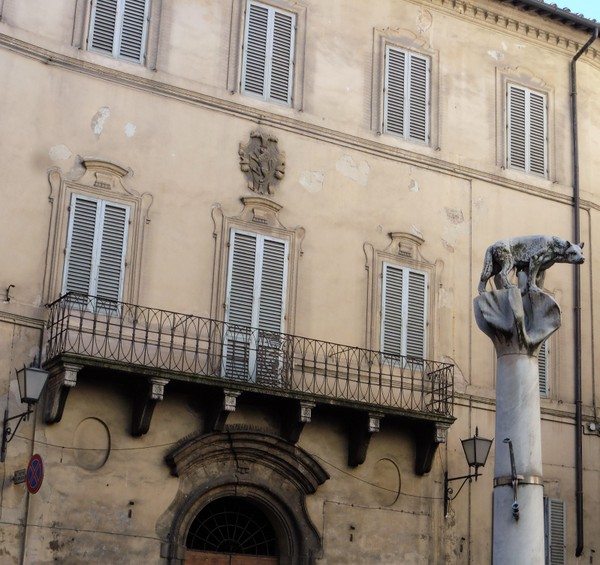 Local legend has it that Siena was founded by Senius and Aschius, the sons of Remus. After Remus was murdered by Romulus, (who Rome is named after) they escaped Rome and headed to Siena. They took with them the statue of the she wolf suckling the two boys Romulus and Remus. The statue (known as Capitoline Wolf), became the symbol Of Siena. Supposedly the two sons rode white and black horses. This features on the coat of arms of Siena which is a shield with a white top and black bottom.
Siena was off the main Roman road so didn’t prosper until the area was invaded by the Lombards. Under new owners the old Roman roads were redirected and soon Siena became thriving market town. As it was on the new and safer main road to Rome there was an increase in traffic, especially pilgrims. Soon the money was pouring in.
Siena became part of the Frankish Empire under Charlemagne in 774 until it became an autonomous region, known as The Republic of Siena in the late 11th century. During the 400 years of the republic the city boomed, the population expanded to 50,000 and monumental buildings such as the Siena Duomo were built. 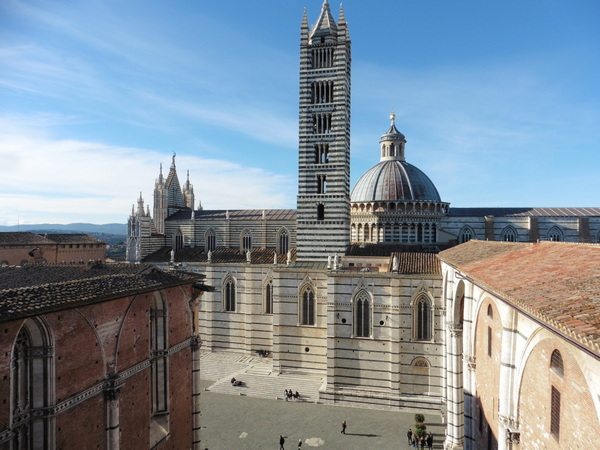 The building of Siena Cathedral (Duomo), was started in the 12th century. It was built in the Italian Romanesque-Gothic style with beautiful white marble covering the brick structure. We bought a multi pass ticket which allowed us access to the Cathedral, Libreria Piccolomini, the Crypt, Museo dell’Opera, Panorama dal Facciatone and Oratorio Di San Bernardino. 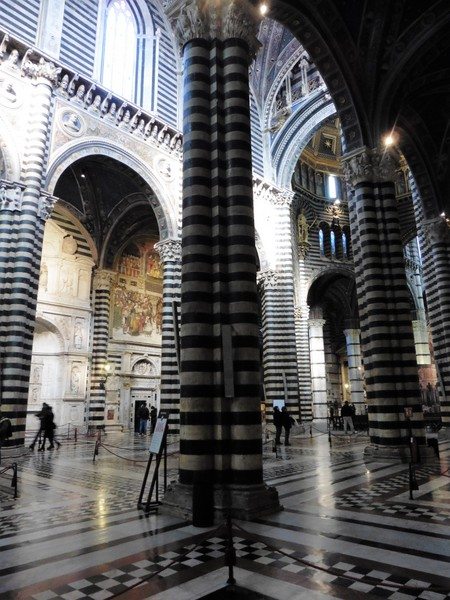 Our first stop was the beautiful cathedral with a magnificent white marble facade. On the roof is a black and white marble bell tower. Inside the Cathedral black and white striped marble pillars frame the aisles on either side of the nave. The floors are decorated in black, white and red marble in highly crafted designs.

The tombs beneath the floors dating from the middle ages feature pictures of various people dressed in fashion of the time. The pictures like drawings in white marble are decorated in red, white and black marble. The craftsmanship on the floors is just exquisite and is supposedly the finest in all of Italy. 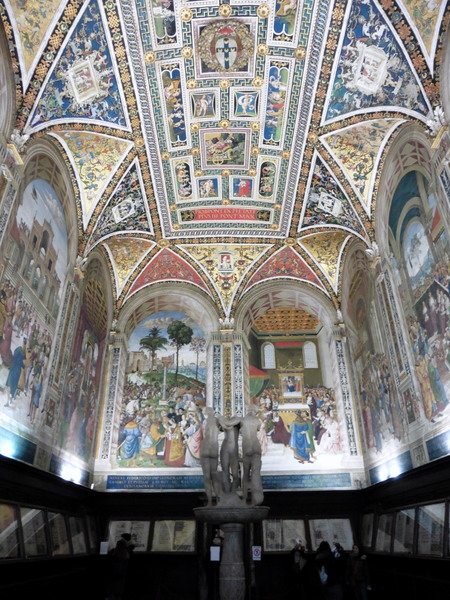 In a chapel off the side of the church old vestments, and decorated organ music books are on display. Dating from the 16th and 17th century the books are decorated with the beautiful lithography. The vestments, also a few hundred years old, feature interesting designs and colours.
The domed ceiling of the transept features a skylight, golden stars, and is surrounded by pictures of saints.

The original concept of the Siena Duomo was to build the biggest basilica in the world. There was only one small problem, money. So what started out as “The Holden Premier” of Cathedrals became the “Holden Belmont”(a little Australian joke there). It was still beautiful but didn’t get all the optional extras. In 1348 Siena, whose population by this stage was 50,000, was devastated by the plague. 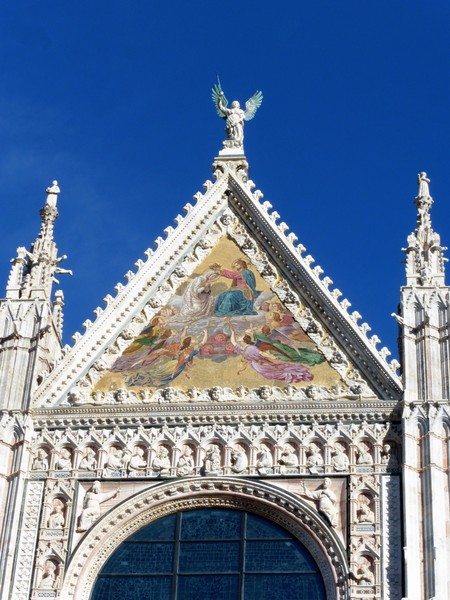 All of those taxable people dying had a profound affect on the ambitious plans for the cathedral. As such the main facade wasn’t completed until 1380 almost 200 hundred years after the beginning of construction.

The eastern nave was started and the wall still stands alongside the religious museum. It’s now known as Panorama dal Facciatone and offers a great view of the city. Access is via an internal staircase, connected to the Museo dell’Opera del Duomo. It gives the impression of the size of the Duomo which was planned. 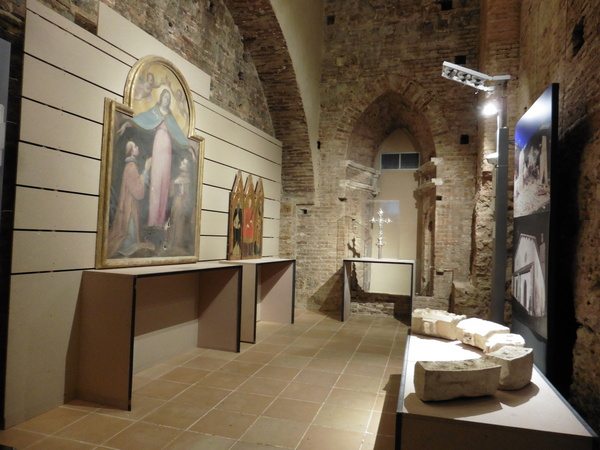 The Museo dell’Opera del Duomo was the original bishops palace and is connected to the Duomo by a high roof with marble archways.

These days the Museo dell’Opera del Duomo houses a collection of art associated with the duomo. It includes paintings, sculptures and statues removed from the exterior walls of the duomo. It was quite funny watching two Germans studying a painting with opera glasses. In one of the upper floors is housed a collection of silver objects including plates, chalices, monstaces, and reliquaries. 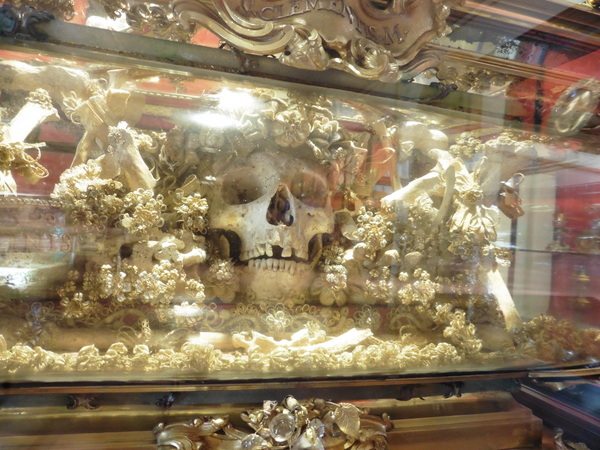 The reliquaries are from a time when the bone fragments, teeth and pieces of dead saints attracted the faithful. One reliquary housed the jaw of a saint but the grandest one belongs to Saint Clementis. From a glass case decorated with gold the gap toothed skull of Saint Clementis peers out from between golden coral. On the top floor of the museum another collection of decorated music books and vestments are on display. It’s also the access to the Panorama dal Facciatone. 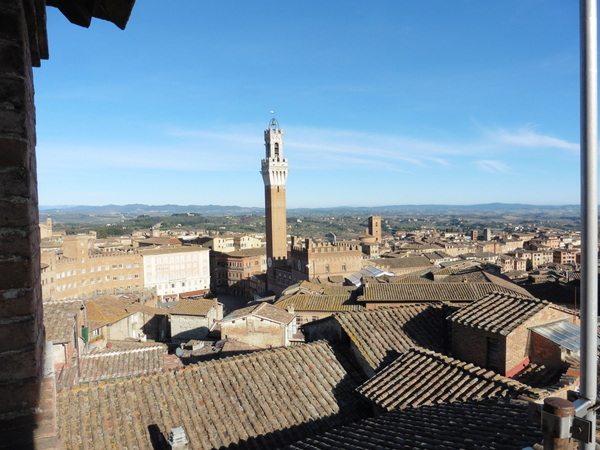 The view across the cityis accessed through an internal staircase, visitors can climb for a grand view of the city.
Behind the Duomo is the access to the crypt. It’s in the crypt that some of the old church is visible amongst the cathedrals foundations. A few walls of the church are painted with frescoes which date from the early Christian period. 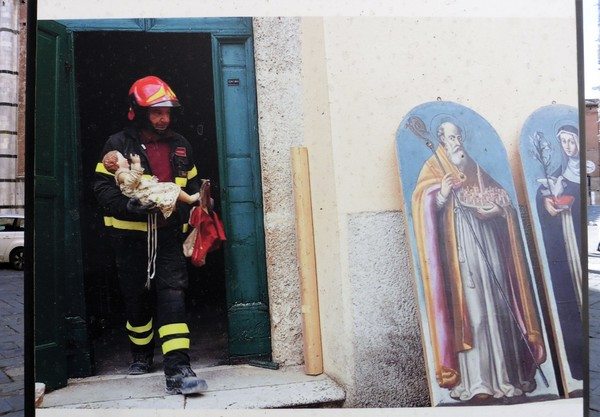 Also on display are items saved from the earthquake in San Benedetto Del Tronto. There’s also a film showing Firemen saving a statue of baby Jesus. It looks like they are carrying a real baby. 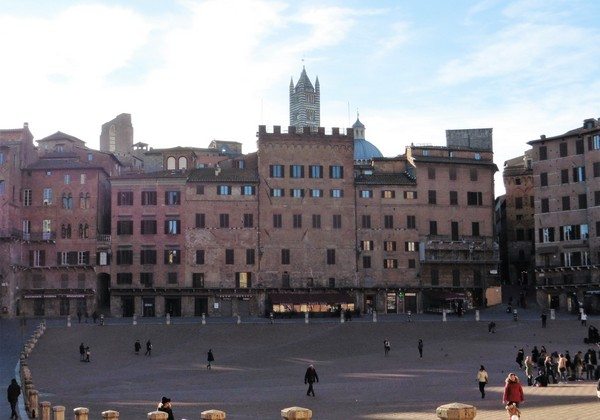 After visiting the duomo we wandered back through the streets admiring some of the beautiful mansions around the city. One of the most beautiful is the Palazzo Pubblico which overlooks the Piazza del Campo. It’s the most famous piazza in the whole of Siena and known far and wide.

The Piazza del Campo is the site of the twice yearly Palio horse race. The Palio is held on the 2 July and 16 August every year. Sometimes an extraordinary Palio is held. The Palio pits ten of the seventeen areas of the city against each other. In preparation for the race the piazza is covered in a thick layer of dirt, (because jockeys often fall off). The horses are ridden bareback with the jockeys wearing the colours of their area. The race consists of three laps of the piazza.
When the Palio isn’t running Piazza del Campo is a great place to soak up the sun, whilst drinking coffee or something with a little kick in it. Or even enjoy a gelato from one of the many sellers.

\With the sun setting and with aching feet it was time to bid farewell to Siena and head back towards San Gimignano. The route took us past some of the other fortified hill towns which feature around this part of Tuscany. Although we’ve only spent a few days in Tuscany we’ve loved the region and would love to come back. Tomorrow we head to Perugia for a few days as we head towards Rome.

3 thoughts on “Siena, A City Of History And Horses”