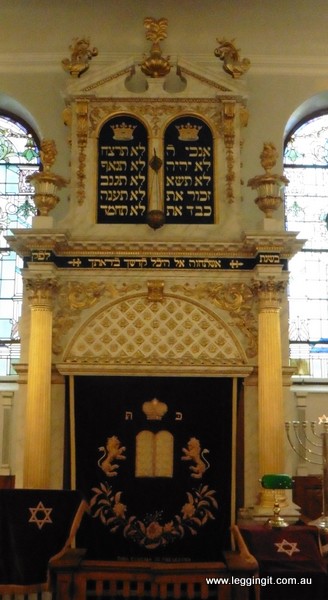 After visiting the Devonport Naval Heritage Museum our next destination was the Plymouth Synagogue. We’d contacted them via their website and had arranged a guided tour. These days it’s become so popular it’s by appointment only.

Finding the Synagogue was harder than we thought. Firstly we rode up Catherine’s Road (not a large road) then we rode down but we just couldn’t find it. After consulting the satnav and the website we just parked the bike up and started walking. Then we spotted a Star of David high on the back of a building so we thought we must be there. Sure enough as we walked down the lane way a bloke extended his hand and said “you must be the Australians”

After introductions Jerry started telling us the tale of the synagogue and his own personal story about how a gentile was conducted tours of a synagogue. He told us about the history of the city, the Jews in Plymouth, and the establishment of synagogue in 1762. It proudly boasts being the oldest synagogue built by Ashkenazi Jews in the English speaking world.

We’d never been in a synagogue before so it was a great learning experience for us both. Entering the synagogue the first thing we noticed was the stained glass windows, yep just like at the St Andrews church across the road. The only difference was of course the symbolism on the windows. The windows on either side of the synagogue being symbolic of New Year, Day of Atonement, and the Sabbath. At the Eastern end of the synagogue the two windows which flank the Holy Ark have the well known symbols of Judaism of the rams horn, the shield of David and the Ten Commandments.

The synagogue has two levels men downstairs, ladies and children upstairs where they can’t be seen from below. It makes sense keeping everyone from distraction. In the centre of the synagogue is a platform called a Bimah, which is where services are conducted, there’s a large desk so that the Torah scroll can be spread out. The Bimah looks a bit like a boats wheelhouse and we were told the builders were shipwrights who were used to building wheel houses, so hence the nautical theme.

The top of the Holy Ark has the Ten Commandments in Hebrew of course and it was interesting comparing the Hebrew version and the Catholic version (thank you mister google). Sure enough number three had been omitted and number nine had been separated. I’m sure someone is googling it right now.

The Holy Ark is quite beautiful, built in Holland, flat packed and assembled in the synagogue. It’s baroque style made to look like pale marble with gilded highlights. At the top is the everlasting light just like the Christian church. The curtains have the Ten Commandments again and inside the Ark, the Torah scrolls. We were surprised how big the Torah’s were and Jerry explained that they were made from vellum, took about two years to make by hand with a goose quill pen and ink. Jerry gave us an explanation of how they were used, when they were used, when they were no longer usable.

So why was a gentile, a non Jew showing us around a synagogue. Well Jerry started working as the caretaker and not long after heard the synagogue was going to close as the congregation had diminished. There were various reasons some families had emigrated to America, others Israel, some had been displaced during the war and hadn’t been able to move back near the synagogue due to council rezoning. OK so they catch a bus to the synagogue from the suburbs. Well that’s what we said, however they cannot work on the Sabbath or cause other people to work which makes that challenge.

However, a group tracing family roots wanting to look around changed things for the synagogue and the caretaker. Jerry learnt as much as he could and started showing people around. That was eight years ago and during that time visitors numbers have grown and grown. Lots of school groups, historical societies, tourists and Jewish travellers wand in and out the doors. It’s got so crazy that Jerry had to make it by appointment only or he never gets a break.

We really enjoyed our visit and learnt so much about Judaism and interestingly how similar it is to both Christianity and Islam.

The long English summer days were far behind us and the sun was already setting at 4:30 so we headed for home via the ferry. The leaf litter on the roads and the rain makes it quite slippery so we took it easy.