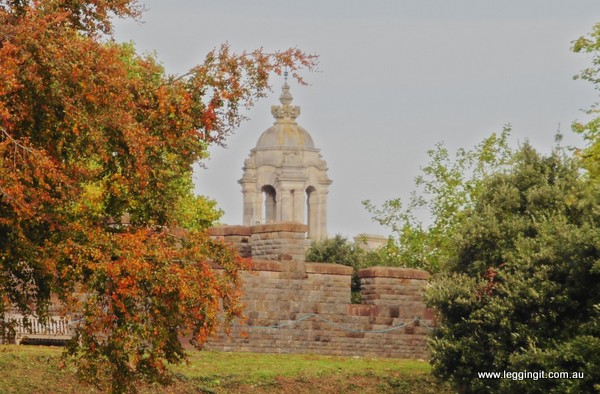 Six o’clock is way too early to be waking up, especially if you didn’t get into bed until after one. After breakfast we headed of for the 30 minute walk to Cardiff Castle. Our walk took us past some of the richest Victorian era buildings in the city and it’s said the whole of the UK. The rows of immaculately preserved buildings along Cathedral Road leading up through the Pontcanna with huge bay windows were stunning. The parks along the river Taff were alive with grey squirrels manically burying food in their preparations for winter.

As we approached Cardiff Castle we noticed the wall alongside the road had all sorts of animals hanging over anteaters, lions, monkeys all sorts of strange creatures. We wondered if it was at one stage a zoo. We later discovered that originally they were in front of Cardiff Castle but had been moved and recently had been restored, the anteater received a replacement nose, the jaguar had a bit of facial surgery. Overall it gave the place a quirky touch.

Arriving at Cardiff Castle we found that they had no cloak room so we had to carry our coats throughout the visit. The castle has lots of interesting history. Romans, Normans, Welsh, the English Civil War, Cromwell and Britain’s industrial revolution have all played a part in the history of the castle. Even Capability Brown, whom we first learnt about after visiting Croome Court in Worcester, had a hand in the castle during the late 1700’s. Here he transformed the range (the living area of the Castle) into a Georgian Mansion, restyled the interior gardens and knocked down many of the medieval buildings and walls. This however was not to everyone’s taste and the changes did not last long.

We decided to take a guided tour of the range, which is the former home of the Marques’ of Bute. Our first stop was the smoking room inside the clock tower. The room is guarded by the Roman God Perseus whose scary face keeps women at bay. Inside the room was filled with internal carvings, painting, stained glass windows and decorations were so full of symbolism it was amazing. Anglo Saxon gods representing days of the week filled the windows, months of the year, seasons they were all there. The craftsmanship was amazing and the amount of thought gone into just this one room unbelievable.

As we visited other rooms it was obvious that each had messages for those who visited. The nursery was decorated with painted scenes from various children’s stories. The Marquis was a deeply religious man and it’s said that the children were not allowed to play on Sundays except with a Noahs Ark.

We visited lots of rooms all with unique styling. There was an Arab room, the grand hall, the master bedroom, the Marquis’ bedroom, and a roof top garden. The roof top garden was quite roman in style as it was tiled with biblical scenes on the walls and with a sunken fountain in the middle and flower boxes.

After visiting the Range we continued on using the audio guide for a self tour around the castle. During WW2 Air Raid Shelters had been established inside the thick walls of the castle and city dwellers had taken shelter there during air raids. It was interesting wandering around inside hearing the stories and seeing the exhibits. The audio tour led us to the motte and bailey in the centre of the castle is fairly intact although all the medieval buildings which were once inside have been removed. There were a few interesting stories of famous people incarcerated in the Keep and one interesting story of a local who scaled the walls despite it being guarded and blew the keep up in protest to high taxes. There were heaps of stories as you’d expect from a site which has been around for so long.

After our visit we decided to check out the centre of Cardiff. There were some great little shopping lanes, with little boutique style shops lining the alleyway. It was so refreshing to wander through good old fashioned strip shopping with little shops instead of large shopping centres. Seeing the sign for the Welsh Love Spoon shop we decided to take a gander. Inside is filled with all sorts of carved love spoons, which is a welsh tradition. The spoons are carved with symbols representing all sorts of promises for married life. There’s also the largest love spoon which stretched from the floor to the ceiling and across the room. It must’ve taken months to carve it. We also met a master carver who really took his work seriously, patiently carving in a time honoured manner, with no scroll saws and electric saws to be seen.

After lunch we checked out St Johns Church. It’s one of the only remaining buildings after the great flood when the river Taff broke its banks. It is dedicated to St John, the Baptist, who is also the patron saint of the ambulance service. It was interesting entering the church as the steps lead down into it simulating descending into the river Jordan to be baptised.

In the church we met some lovely people selling christmas cards and decorations with all the proceeds being distributed amongst all sorts of charities. Truly remarkable people. Inside the church were memorials to those killed in the WWI and the message on the stained glass was really powerful. Michele was particularly taken with a wall of prayer for peace which had some very powerful messages on it.

Soon we discovered the daily sunlight allowance had expired and as the rain clouds started slowly descended we decided to start to head back to the B&B via the park.
The park which follows along the River Taff is a nice break from the city with lots of squirrels and bird life. There’s a few cafe’s but as we were late in the day we discovered they were just closing, so popped into a local pub for a quick break to dodge the rain. The pub was filled with old cricketing photos from Gloucester and it was nice checking out the old scorecards and it was funny seeing a few familiar faces.

The rain eased off just long enough for us to make it back to the B&B where we spent the rest of the night just chilling out and chatting to Steve and Sarah.
You can see their airbnb profile here