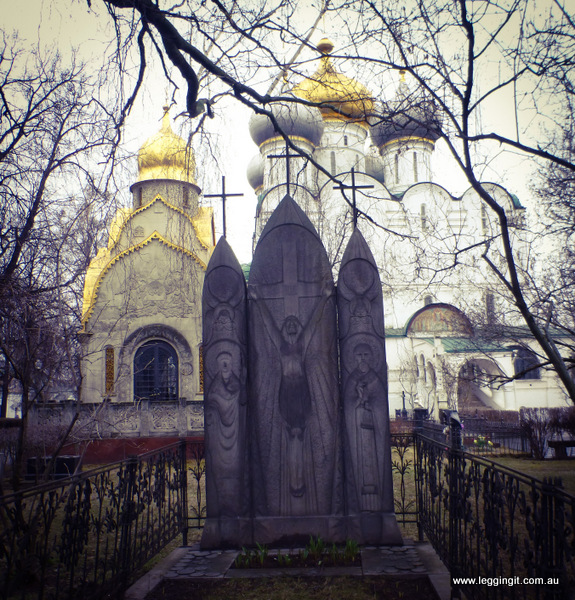 Although we needed to get to the Belarus Embassy again this morning, whether we wanted to be awake or not at 0545am this morning we weren’t given a choice as a local driver started blowing his car horn, in an attempt to wake the person they were picking up. He wasn’t successful despite his extended efforts but managed to wake everyone else up in the four buildings surrounding the car park. In the days of old I would’ve emptied a chamber pot contents on his car, but alas inside plumbing robbed me of the opportunity to shut him up, so I just swore.

The weather had changed last night and for the last few hours it’d been steadily raining. The rain eased off at daylight to a light drizzle so outdoor activities were not a great idea.

After breakfast it was shower time, then off to the Belarus Embassy to try our hand at a third attempt at a visa. We arrived about 830 and joined the queue outside the embassy gate we were 7th in line. All I could hear ringing around my head was John Paul Young’s “you left me standing in the rain” lol.

While we were standing there we recognised one of the guys from Friday’s line. Unfortunately he was from Bangladesh and he probably had grounds for discrimination saying that the Belarus staff had made him jump through extra hoops due to where he was from. This was his 7th trip to the embassy with each time his visa being denied due to a different reason. He’d been sent for blood tests to prove he wasn’t HIV, he’d had to prove he had money, he’d had to provide invitation letters, then receipts for hotels. They put the hoops up for him to jump though, whilst saying “not my problem”. We chatted to him and his friend whilst waiting for our visa. It was hard contemplating his situation of going back 7 times. For him he was a clothing manufacturer so it was straight business, so a lot was riding on him getting a visa.

Eventually our number was called (but not before someone jacked the line VIP treatment) We reached the counter and the hardened face of Svetlana wrinkled at the corners of her mouth as she said “Ah the Australians”. Svetlana must’ve had a great weekend on the vodka and probably still had a couple of litres pumping through her veins because she was quite cheery and happy to speak English ??? What the??……(maybe she was still happy after denying number 5 a visa)

She checked our paperwork which was all in order. We’d filled out all the boxes we’d left empty which she’d tisk tisked about on Friday and by the magical stroke of the pen we’d been re-employed. We had thought of making up bullshit jobs and employers but thought “no don’t stand out, just fly under the radar.”

Papers in order she stapled them and ushered us to the next window, Svetlana was a model of beaurocratical efficiency. The next window was staffed by a Ivana Panadol who hadn’t had a great weekend and was sleeping off a vodka weekend her pounding head enraged by the people being sent to her window by Svetlana the Denier (this was most unlike Svetlana) We parted company with 3,960 roubles ($117 dollars) and were told to come back after 4pm tomorrow to pick up our visas. We wished our friend good luck and headed back to the cafe we’d eaten at on Friday celebrating with a chocolate hedgehog, a berry pie and coffee to warm up.

After the celebration we headed out into the cold again but this time I was minus my jacket liner as Michele was in need of it. She hadn’t worn her cardigan as it had to be washed as it was smokey from eating at a restaurant last night. It’s hard to grasp why Russia still allows smoking inside buildings.

The wind was bitter as we made our way to the subway and caught the train to Sportivnaya. Not far from Sportivnaya is Novodevichiy Monastery (700 m the sign says) and it was freezing walking along as the weather was quite arctic by this stage.

The Monastery is a beautiful old fortified complex with high walls and turrets. All the walls have been plastered with white clay and in some areas it needs a bit of attention. The entrance fee was 300 roubles each and 100 roubles for the camera. The Cathedral of the Virgin of Smolensk was built in 1524 by Basil II to celebrate the capture of Smolensk from the Lithuania. The rest of the buildings were added by the regent Sophia in the 17th century, who ironically enough had built a prison for herself. Her half-brother deposed her and reclaimed the throne and detained her here for the rest of her life. One story goes that Peter had three of Sophia’s advisors hung outside her window to warn her not to escape.

After Peter the Great died in in 1725 his first wife moved here to Lopukhin Palace (a large two storey manse on the grounds) from Suzdal monastery where she’d been living since Peter had grown tired of her. There was another palace at the back of the grounds, or rather a long building, which was called the Palace of Irina Gudunova who was the widow of Tsar Fyodor I. It seems back in the old days when emperors, kings, tsars died or got sick of their wives they locked them up in a monastery. The choices were fairly clear. As they were god fearing people it was either that or you got to meet god quicker than you planned. People fell on knives (accidentally of course or had the most tragic accidents) 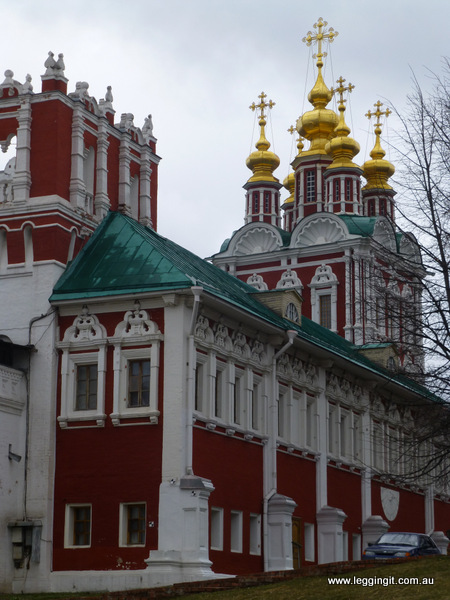 There were a few halls which held various displays. The first hall we entered had all sorts of religious icons and their silver covers. The icons were pictures such as Mary and baby Jesus, apostles and the like. Some of the paintings were quite beautiful but others were a little creepy with Jesus being a small child in his mother’s arm but painted with an adult’s body. 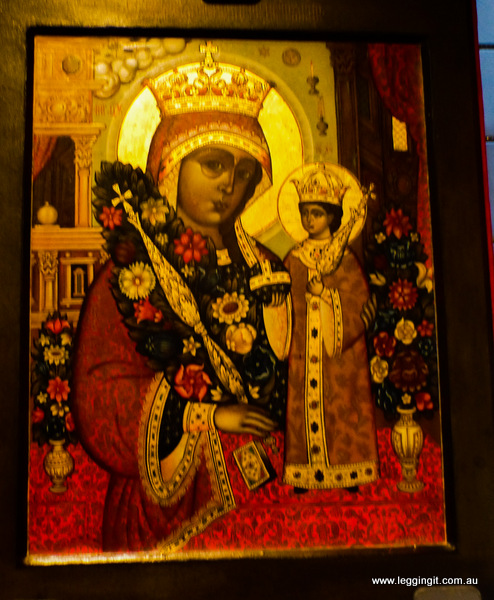 There were other displays with a bit about Napoleons visit to Moscow and how he’d tried to steal from the church but had been defeated by the power of the church. Superstition?
The next display was the human face of the church. During the Stalin years 29,540 operating churches had been reduced to 500. Priests, nuns, laypeople were rounded up and sent to labour camps, tortured, executed or all of the above. It’s estimated that in 1937 alone 85,000 priests were executed. On the walls were photos of local priests, nuns and monks who were martyred by the state. There were before and after photos of local churches destroyed by the state or commandeered for use by the state. It was interesting that although the government tried to shut down the church and turn the country into an atheist state the church survived through the years sometimes at grass roots levels and other times slowly clawing its way back. Successive presidents had anti church campaigns but under Mikael Gorbachev this was all to change. It was estimated that in 1987 up to 50 percent of babies were baptised and 60 percent of people had church funerals. The next section covered the revival of the church. It has been quite interesting as an outsider watching even young people that follow this formerly outlawed traditions and beliefs.

The cathedral of course was stunning with golden crosses atop the golden domes on the roofs. Large frescos and white plastered walls. We entered the church which was full of locals popping in to offer prayers and light candles. For us it’s great to see functioning churches and not museums of a time gone past. It’s something powerful and uniquely human.

After a few hours in the monetary we left and wandered into the cemetery which adjoins it. I’ll tell you we’ve seen some of the monuments in the cemetery in Melbourne but you haven’t seen nothing until you see this place. There’s more marble here than in Rome. When people pass on it seems quite important that a monument of sorts is raised to them. That’s why this cemetery has life sized and bigger bronze statues of the dear deceased (dunno how they got them to pose for the sculpture) ………oh by the way I’m planning to pop off my perch here’s a couple of million rouble so you can capture me life like??.

There were busts of former Russian warriors wearing leather flying helmets, cosmonauts, pilots about to fly off into the wild blue yonder and stern faced generals some even shouting down the phone.lol

One former warrior even had a metre long T39 tank atop his grave. It seemed that a lot of them weren’t content with a name or a picture marking the grave they wanted a life sized reconstruction so that there was no ambiguities as to who was buried there and their career in their former life. 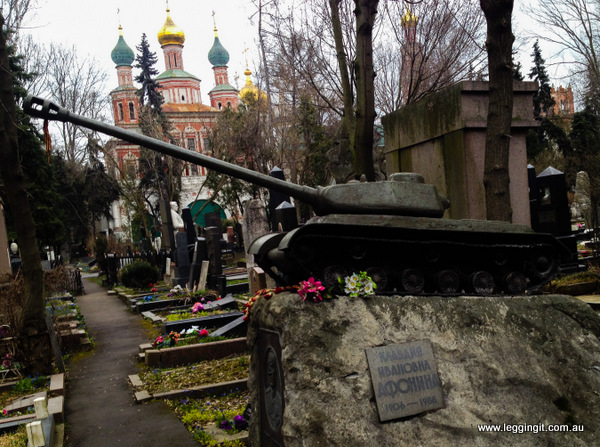 After walking around in amazement for a few hours we were absolutely chilled to the bone so caught the train back home, briefly stopping for supplies. It was so nice walking into a warm flat that I immediately found my warm jacket and put it on, not taking it off until I felt warmed to the core again.

14 thoughts on “Belarus, You Left Me Standing In The Rain.”